The Lords were almost a leaping! Sue Wilson returns to the UK 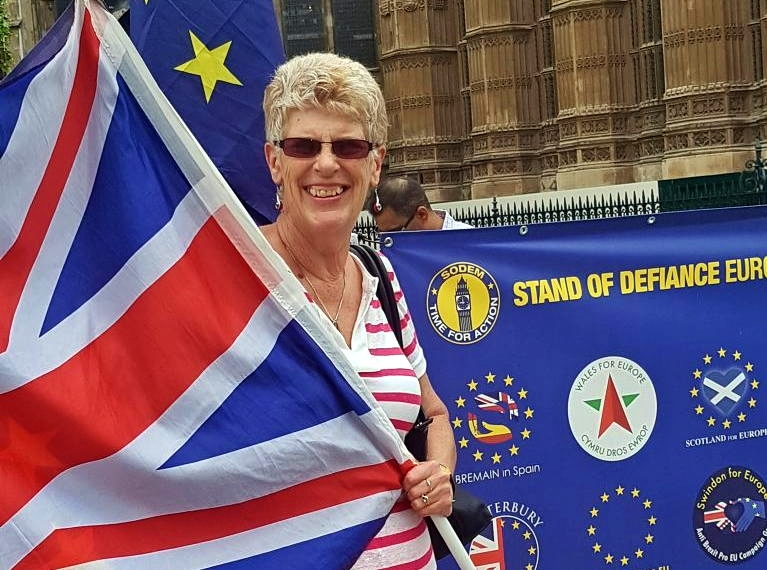 My first event on Saturday 5th May was a regional launch event in London for the #PeoplesVote campaign. Launched by the Grassroots Coordinating Group (GCG), the meeting was hosted by Britain for Europe, European Movement & Open Britain, who are all partners in the GCG along with other groups such as Our Future, Our Choice, Scientists for EU & InFacts.

The surprise guest was Seb Dance MEP, who I had met previously in London & Brussels. As always, he gave a passionate speech about why Brexit must be stopped, & how giving the public a say on the final deal is the best way to achieve our goal.

I was chuffed to bits that he gave me a wave & invited me, by name, to ask a question. I asked, “What are the chances of Labour supporting a #PeoplesVote before the Tories do?” Seb replied that Labour were moving in the right direction, with the front bench being very aware of the issue. He & others within the Labour party are constantly applying pressure, especially on the Shadow Cabinet, & are focusing a lot of attention on new, younger members, who are very pro-European. They are also constantly pointing out that the majority of Labour supporters are Remainers.

During the launch we talked about the strategy & the timescales for the campaign, & of course about the forthcoming march in London on the 2nd anniversary of the referendum. I shall be attending in person along with many Bremain in Spain members. We hope that many of you will join us. 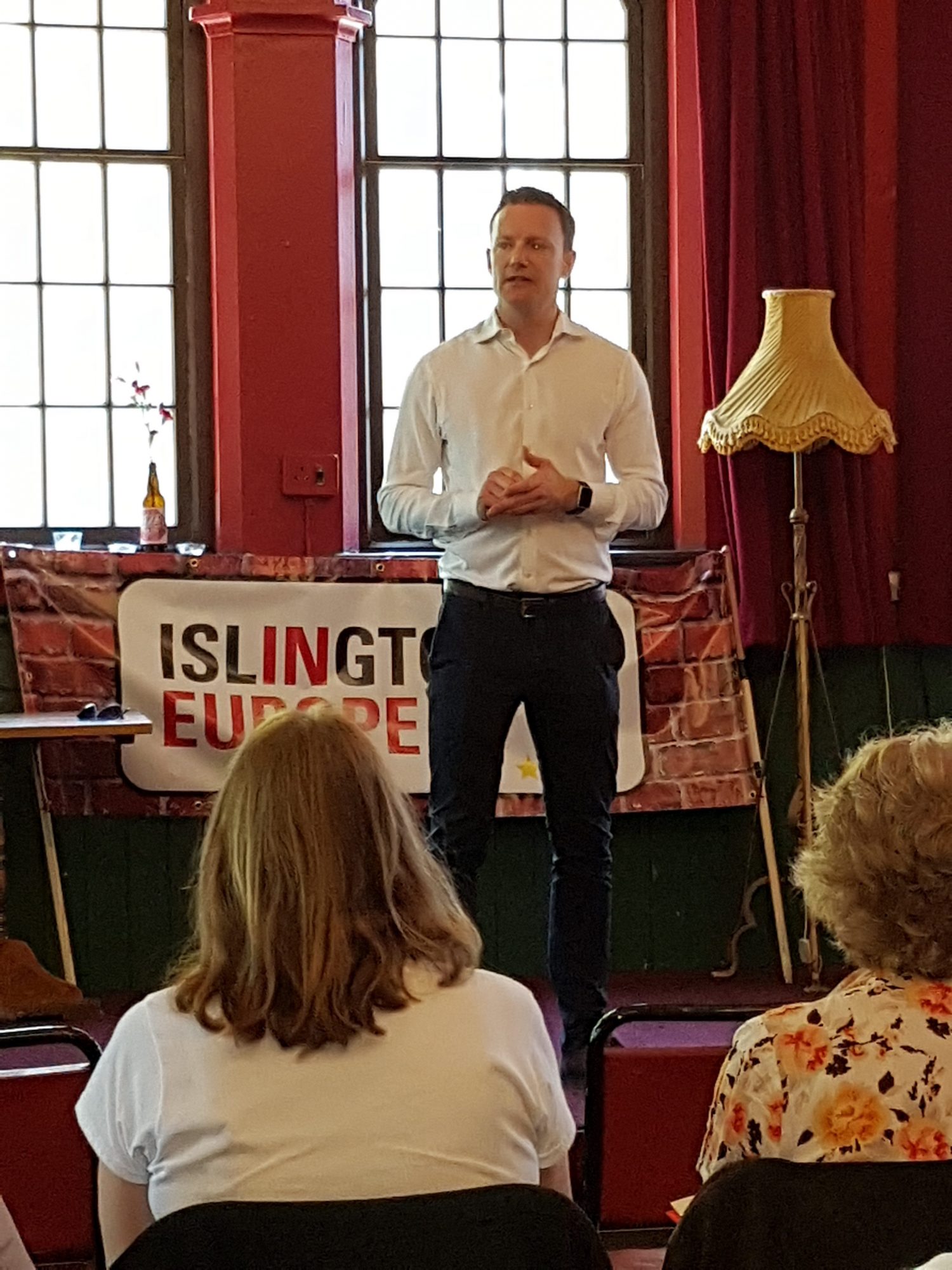 For more information about the campaign & the march, check out the #PeoplesVote website: www.peoples-vote.uk 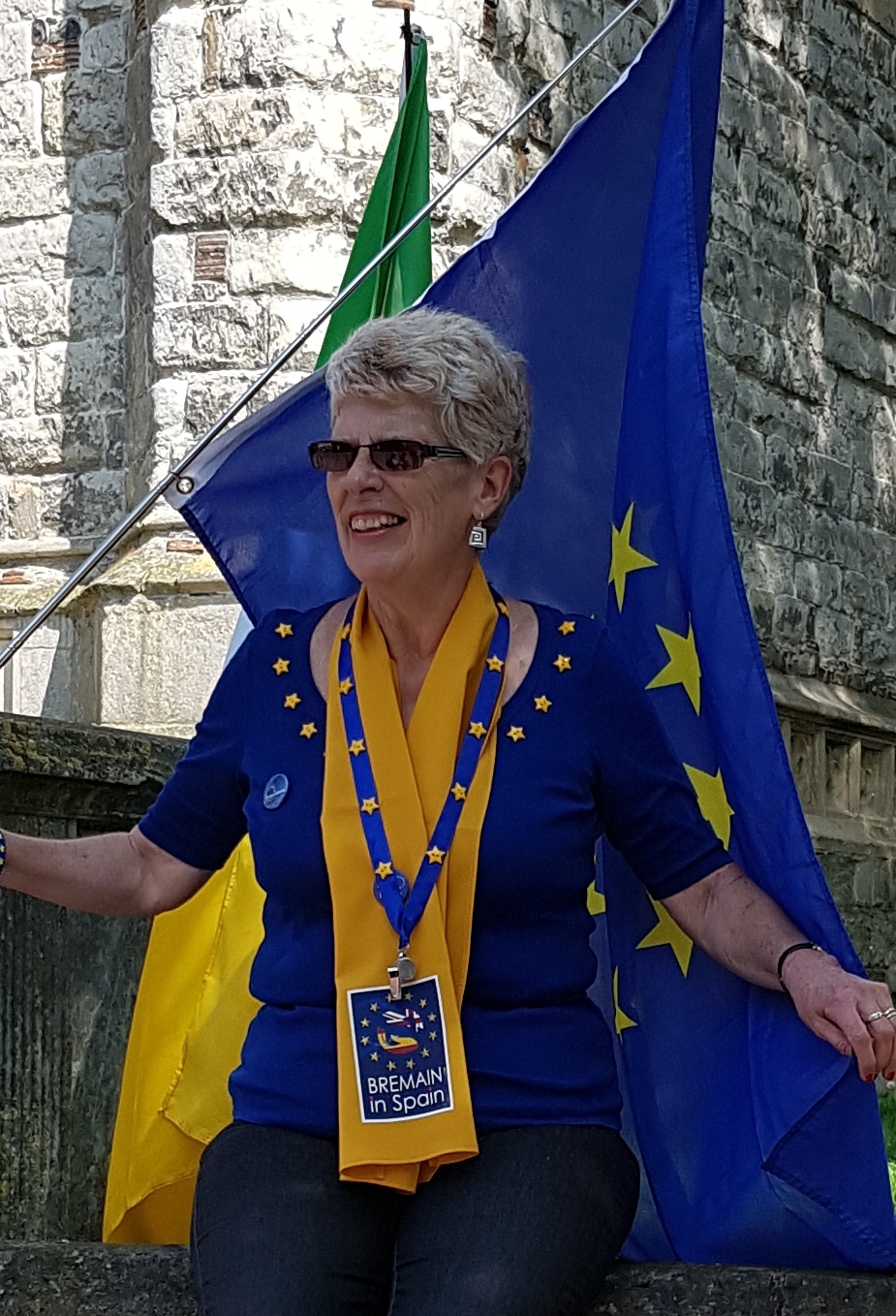 My next event was the Pulse of Europe event in High Wycombe, where I assisted on a street stall & gave a short impromptu speech. The High Wycombe branch meet in the town centre every 2 weeks to engage with the public & talk about Brexit. Surrounded by lots of EU flags plus the flags of all 28 EU countries, it was a colourful affair, & the stall was manned by several campaigners from Germany, Italy, France, Scotland & England – a truly European event. We spoke to many Remainers who were happy to receive free flags, badges, leaflets & advice. We didn’t see any Leavers, but maybe they were just avoiding us. Everyone we spoke to was very reassured to know that Brexit is not a done deal, & all were in favour of a #PeoplesVote on the final deal.

You can read more about Pulse of Europe at their website here: pulseofeurope.eu

It is always a pleasure to meet up with Elena Remigi of In Limbo – this time it was at her home in Theresa May’s constituency. The preparations for the launch of her second book – In Limbo Too – are going well & it’s only a matter of weeks now before it will be published. This time the stories are all from British citizens living in the EU, & Elena was very grateful to all Bremain in Spain contributors for their moving testimonials. 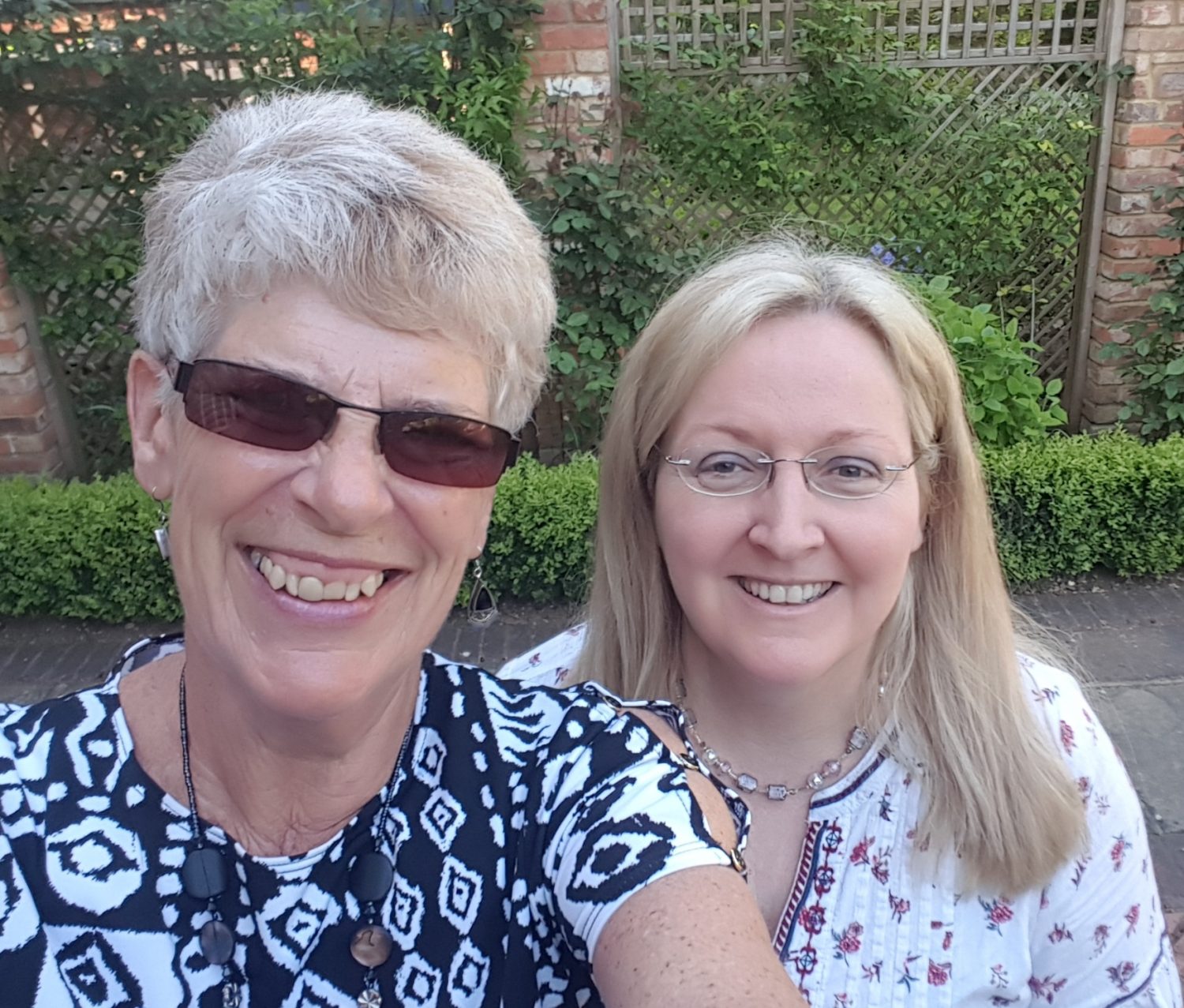 She will shortly be writing to all contributors to say thank you in person & to update them on progress. I look forward to reading the book very soon – I suspect a box of tissues will be required! Here’s a link to their Facebook Page: Our Brexit Testimonies

A trip to London is always very busy as so many of the campaigners that I wish to meet are based there & then, of course, there’s the Palace of Westminster. 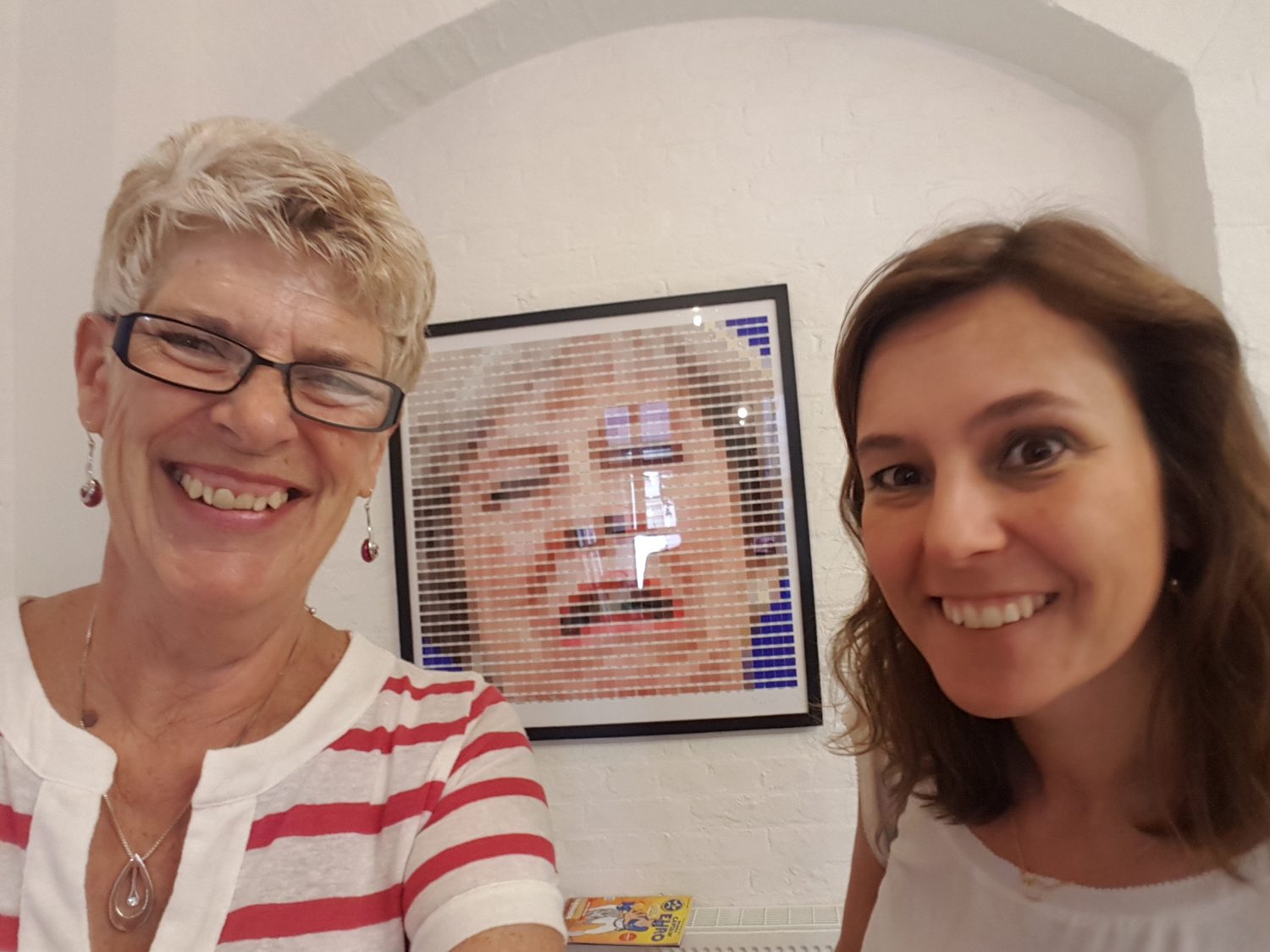 My first visit was to the office of Best for Britain, where I met with the CEO Eloise Todd. I expressed out sincere gratitude for the £500 grant we received from them recently, which will be ring-fenced for the Best for Britain/Bremain in Spain Barnstorm training sessions. Eloise & her team are busy working on their campaign, & will be making a strong case for staying in the EU, not just getting the best Brexit possible. We will be looking to collaborate again further – always a pleasure to work with such a dedicated team.

My second visit was to the new shared offices of the GCG, where I got to meet colleagues from a variety of groups, most especially those we have a direct connection with. As members of Britain for Europe & partners of European Movement, there is always a lot of ground to cover, most of which I did with Tom Bruffato, Chair of Britain for Europe. We talked about the campaign, the march & new data requirements & I collected a supply of #PeoplesVote campaign leaflets. 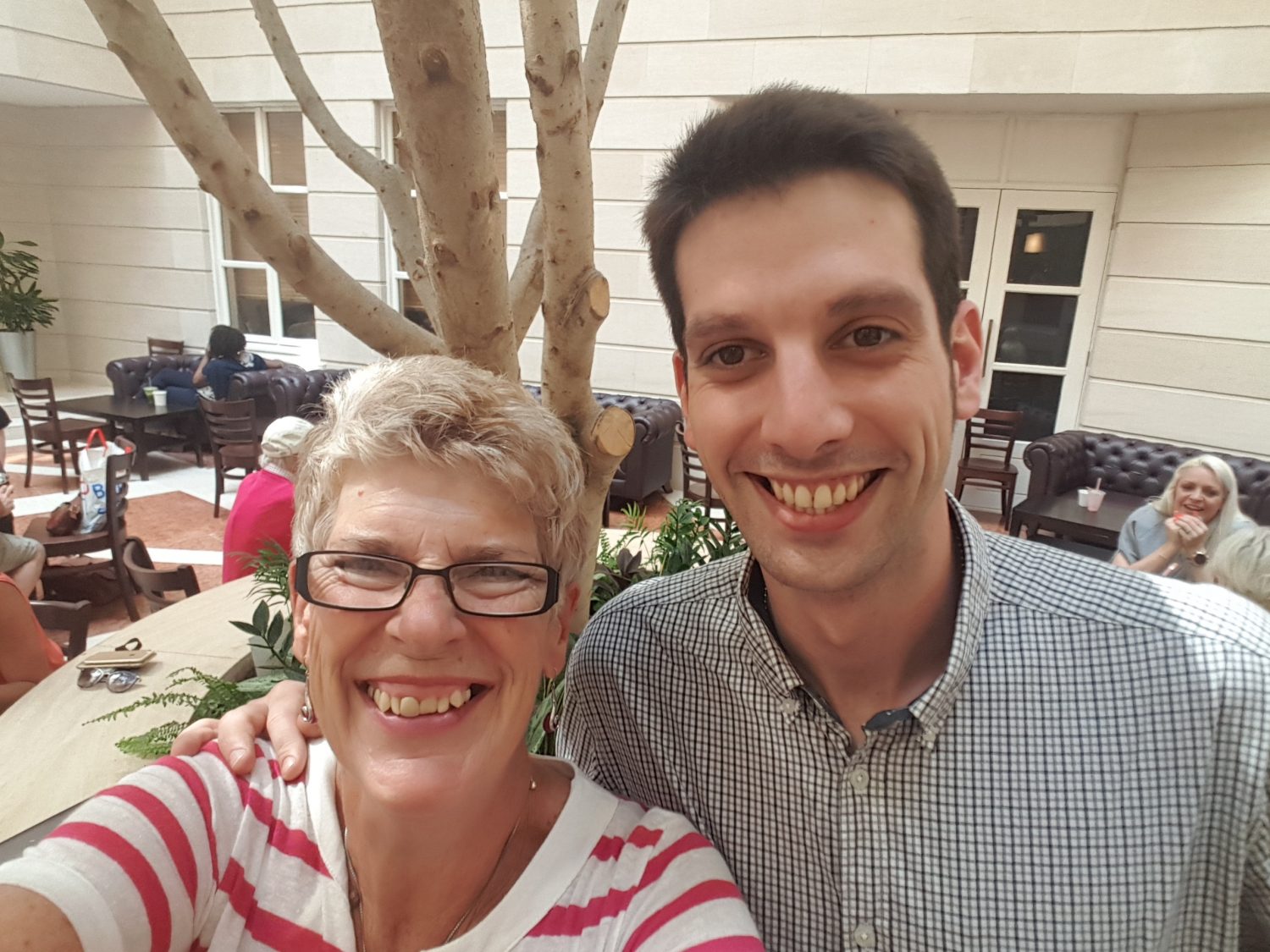 I also met James MacCleary, Campaigns Manager of European Movement & members of Open Britain & Our Future, Our Choice. It is wonderful to see the groups working so closely together for our common goal, & I’m proud of our connection. 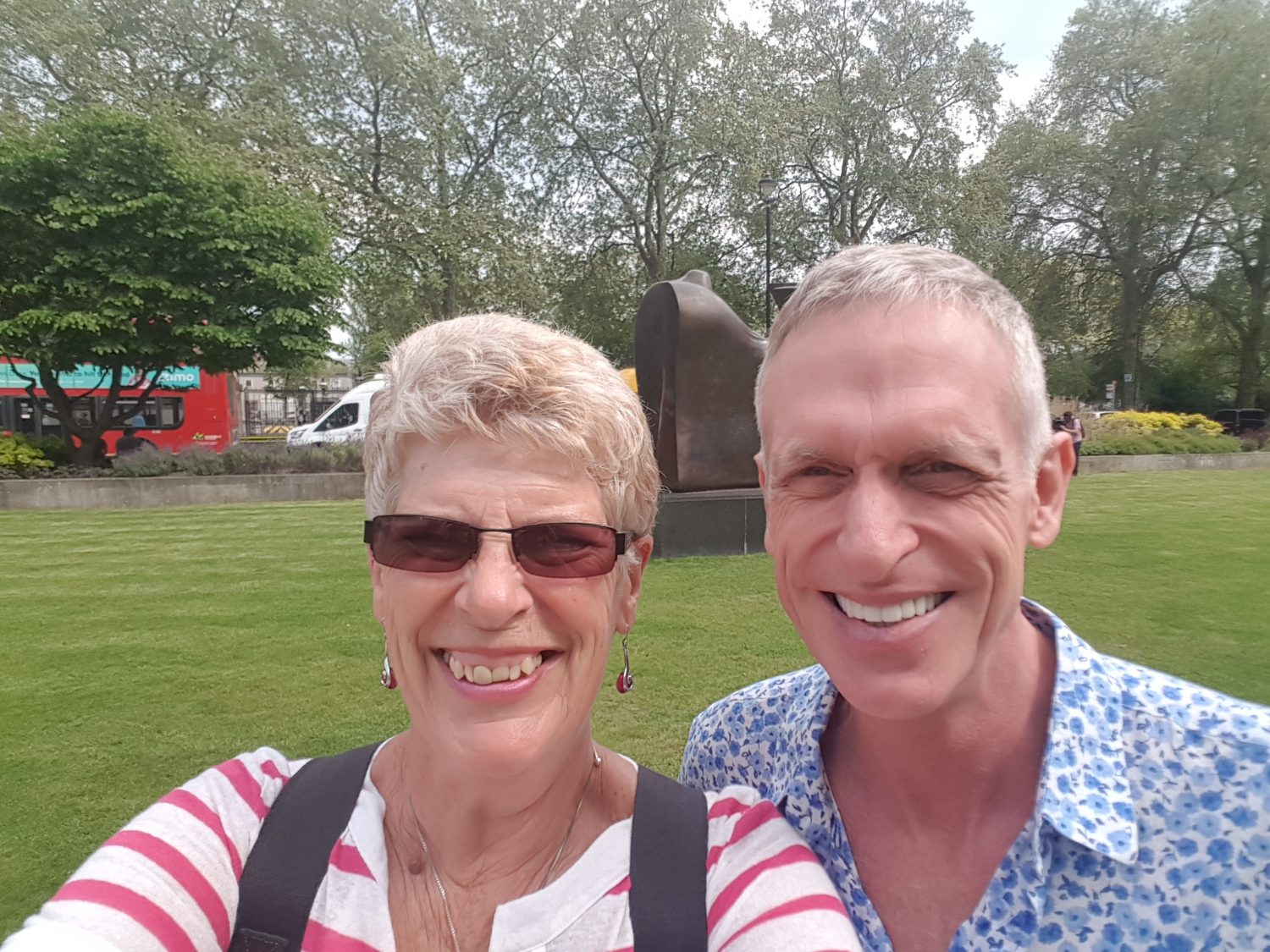 I had the pleasure of meeting Peter French of Reuniting Britain for lunch. Peter is working on his own big march, scheduled for October 20th, just before parliament are due to vote on the Brexit deal. Peter has invited me to speak at what he hopes will be the biggest march the UK has ever seen – you can expect to hear a lot more about it once the June 23rd march has taken place. Many Bremainers have already booked their flights for this one, including a few Bremain council members.

With only 15 minutes to spare before I was due at the House of Lords, I paid a brief visit to SODEM to see Steve Bray & his wonderful new banner, which features our logo amongst many others. It may not have been a long visit, but boy did I time it well! Madeleina Kay (EU Supergirl), Femi (Our Future, Our Choice) & Mike Galsworthy (Scientists for EU) all turned up just after me. I’ve met them all several times before, but it’s always a pleasure, & they always draw a crowd. 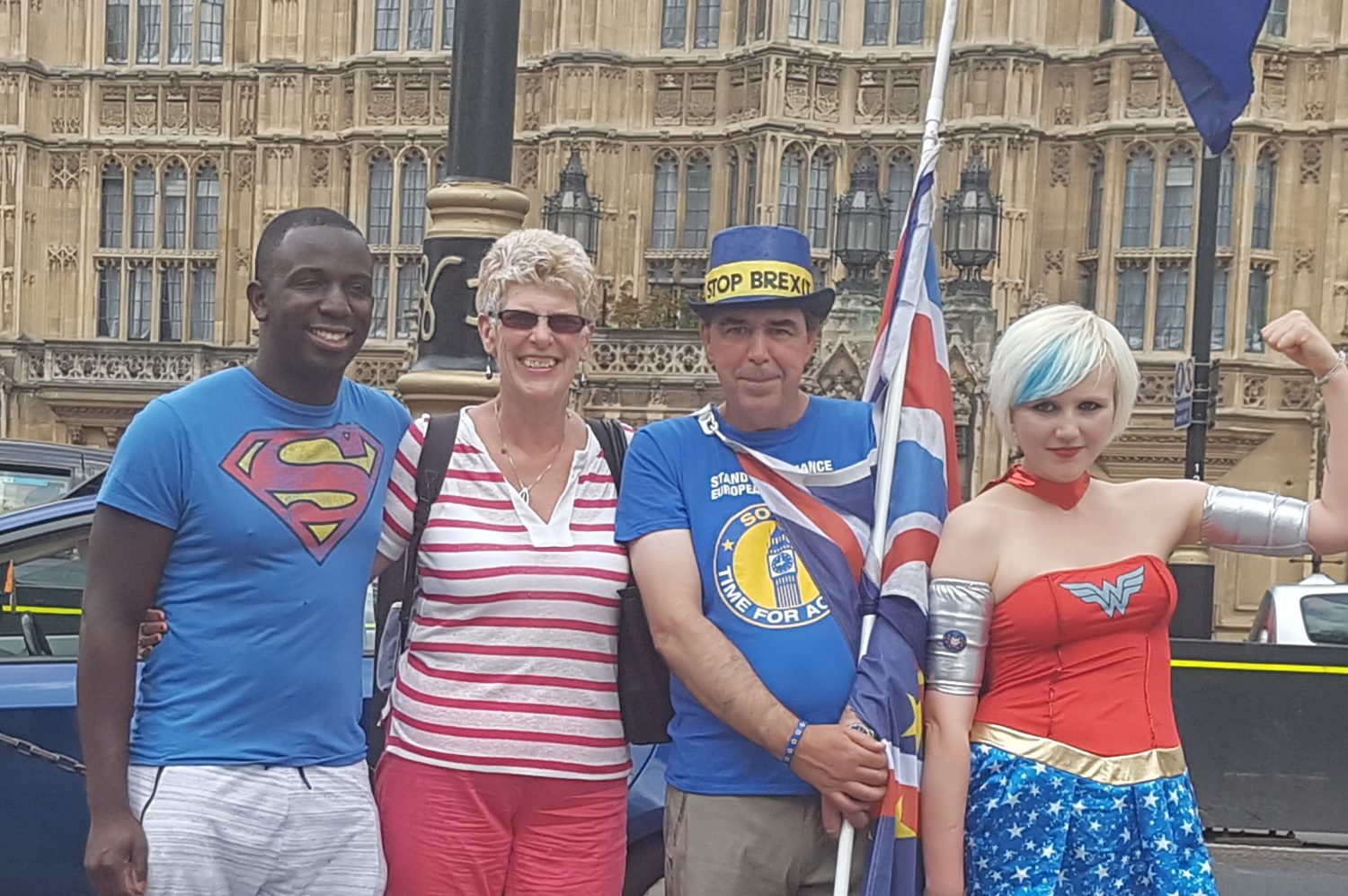 My final & most important visit of the day was another visit to the House of Lords, to witness further EU (Withdrawal) amendment debates. Thanks to Baroness Sally Hamwee, I had a ticket for the good seats, & my visit kicked off with me bumping into Lord Heseltine in reception. I asked to shake his hand & thanked him for all he has been doing for the cause.

I stayed for 5 hours, & saw 3 debates & 3 defeats for the Government – 1 minor amendment, then an expected win over whether or not the exit date should be included in the Withdrawal Agreement (no it shouldn’t as it removes any flexibility), then finally, the amendment about EEA/Single Market membership.

Between debates, I spoke to Lord Wallace of Saltaire who I had previously met when we both made speeches in Leeds.

The EEA amendment debate was the longest, the most interesting & certainly the most significant. There were some amazing speeches, especially from Lords Mandelson, Kinnock, Wallace of Saltaire & many others. Labour Lords were expected to obey the whip & abstain, & the amendment was expected to be narrowly defeated. The debate attracted quite a crowd, including from the House of Commons – it was standing room only where I was sat, & close to my seat MPs were watching attentively, including Chuka Umunna, Owen Smith & Chris Leslie. Clearly Labour MPs were very keen to see what Labour peers might do.

When the results were announced, & the government were defeated, it was clear that many Labour Lords had defied the whip (83 in fact), & 17 Conservative Peers had followed suit. The surprise & delight on the faces of the Remain peers was clear to see – a fantastic atmosphere! I took the opportunity to leave at this point (now 8 pm) so was leaving the chamber at the same time as the Lords. I managed to introduce myself to Lord Newby, who recognised the Bremain in Spain name straight away & was happy to stand & chat – he could barely stop smiling. I also spoke to Baroness Ludford, who then continued the conversation on Twitter later saying that it was nice to meet me & that I had just witnessed history in the making – it really felt like it.

I also spoke to Chuka Umunna afterwards who told me he was delighted & was busy tweeting the result.

My last day was spent at 2 events in Milton Keynes, organised by the local branch of European Movement. The first was at Milton Keynes College, & was a presentation & series of workshops for a group of teenage students.

There was a panel made up of Lord Adonis, Will Day of Our Future, Our Choice & Madeleina Kay & I helped out with the workshops. The audience of c 50 students was split 70% Remain to 30% Leave (although none had voted in the referendum).

I think we managed to open a few eyes & ears & gave them all some food for thought. Topics covered were tailored to be relevant to the young audience & included education, jobs & travel. 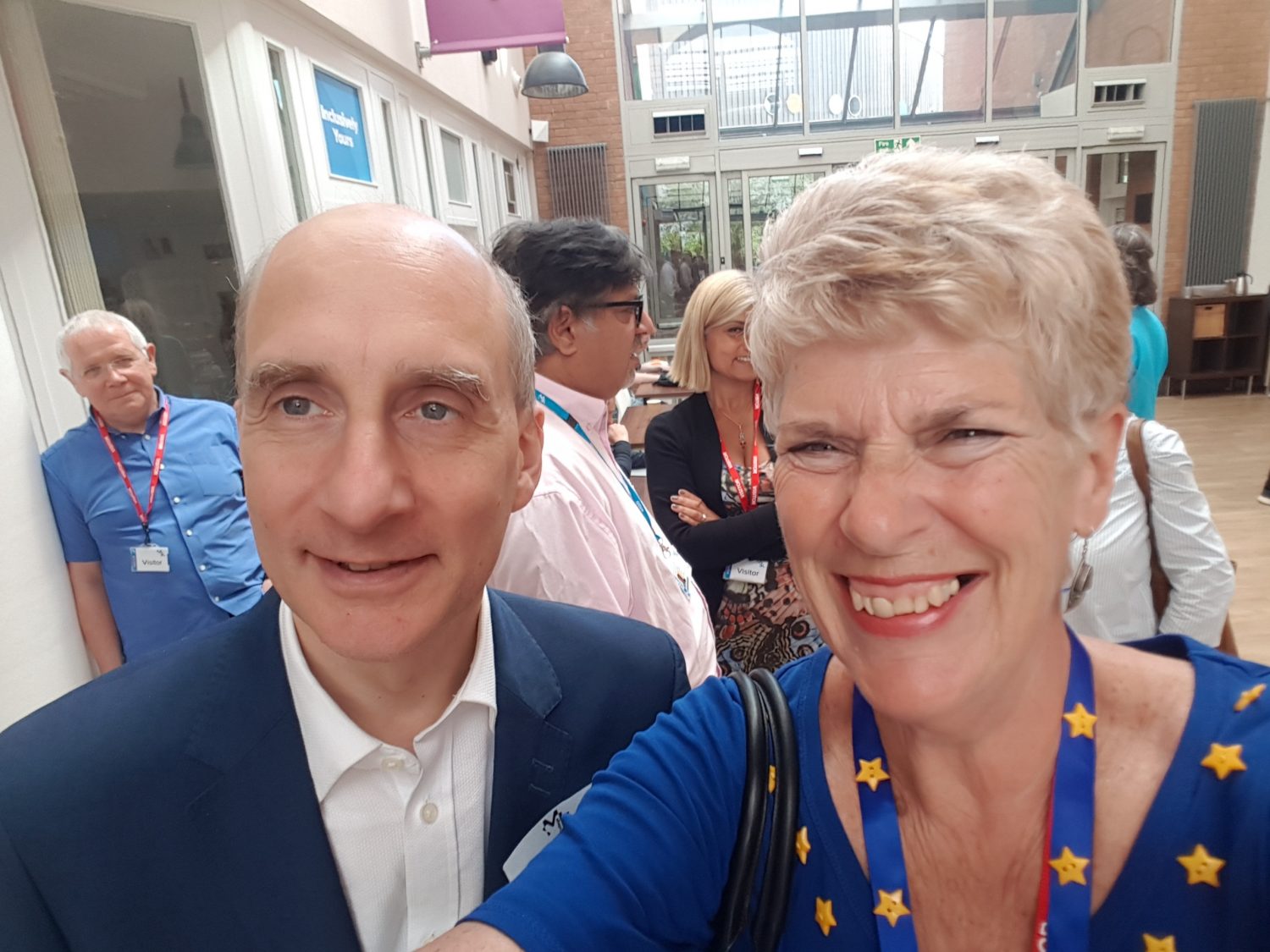 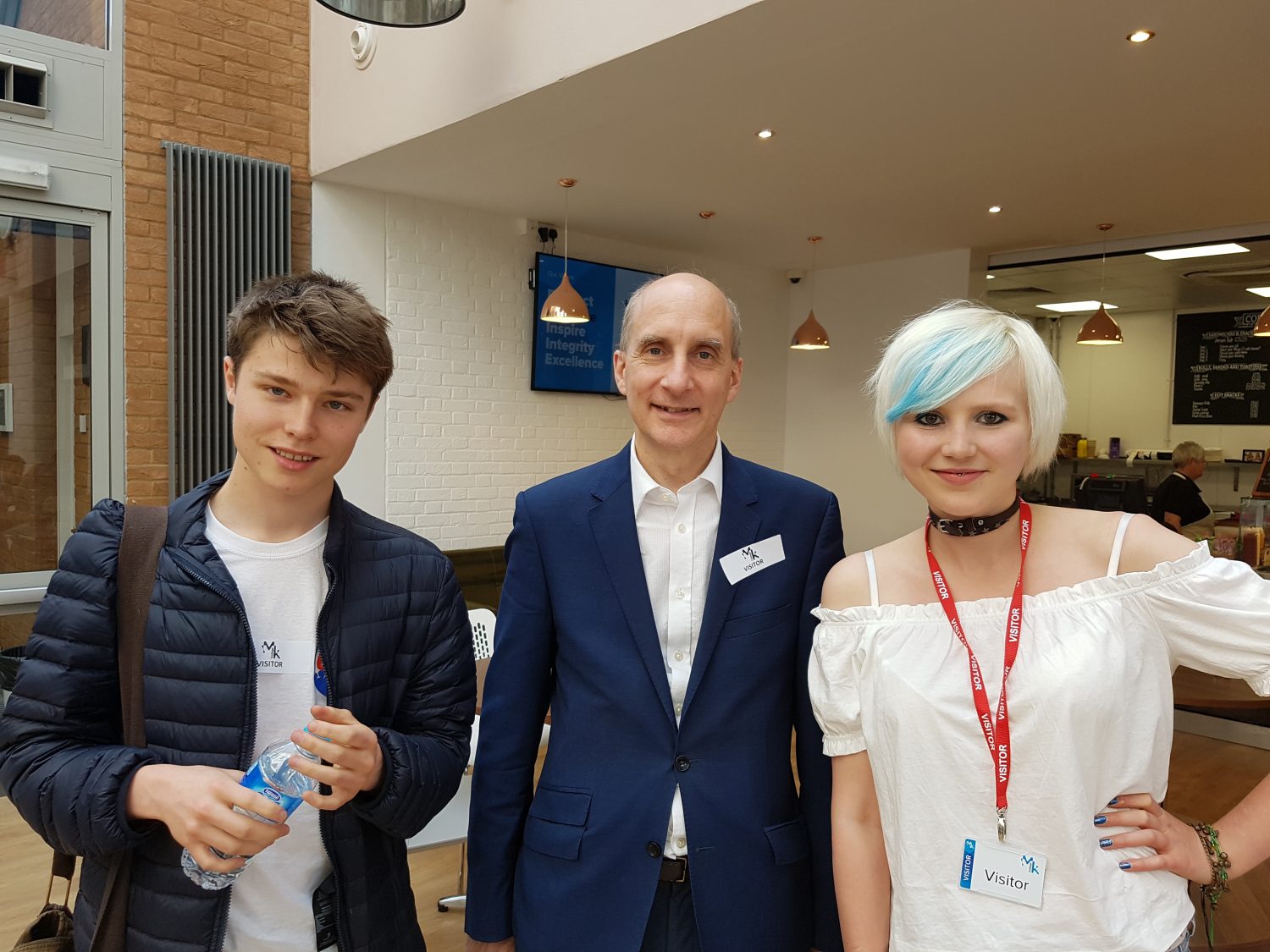 Afterwards the hosts plus Lord Adonis, Will & myself all attended a street stall outside the station to promote the #PeoplesVote campaign & to survey the public on their attitudes to Brexit. Happy to say we reassured a few worried Remainers, & it was agreed by most, regardless of how they voted, that Brexit was not going well. I did survey a couple of Leavers, but they were of the extreme variety, so I didn’t manage to convert anyone. Note to self – must try harder! 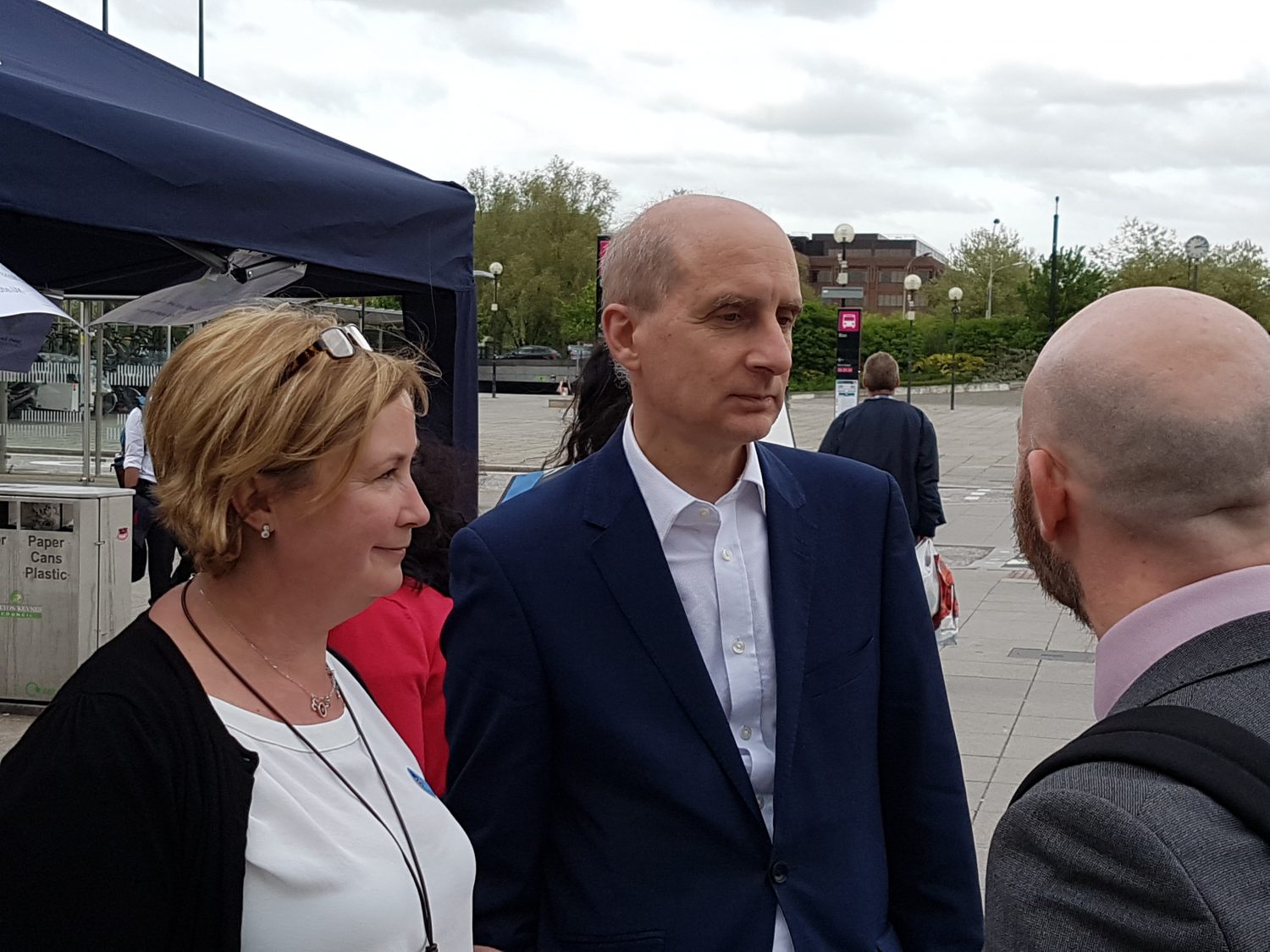 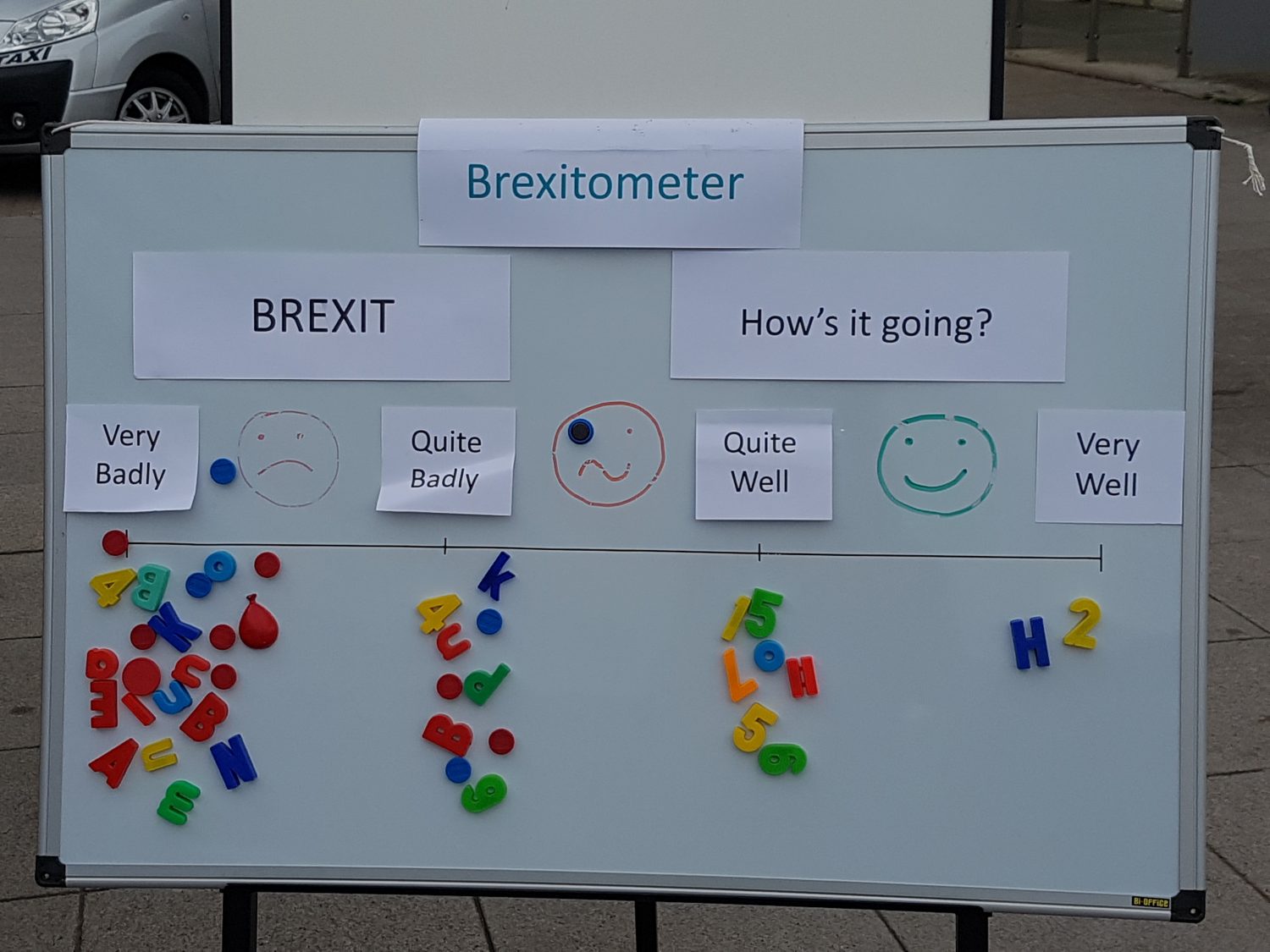 Next trip already booked – roll on the #PeoplesVote March on 23rd June.
Please come & join me!