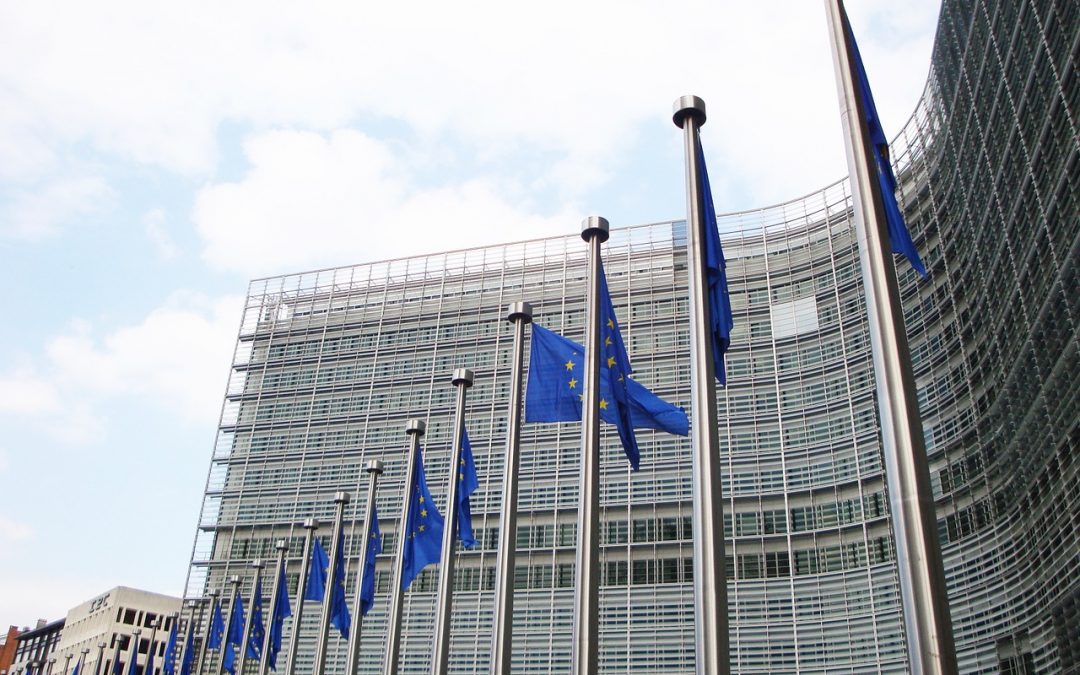 Chair of Bremain in Spain, Sue Wilson recently spent a few days in Brussels meeting MEPs, fellow Remainers and attending the Premiere of the documentary Postcards from the 48%. Here’s her story ‘ It’s Tuesday, so it must be Brussels’. 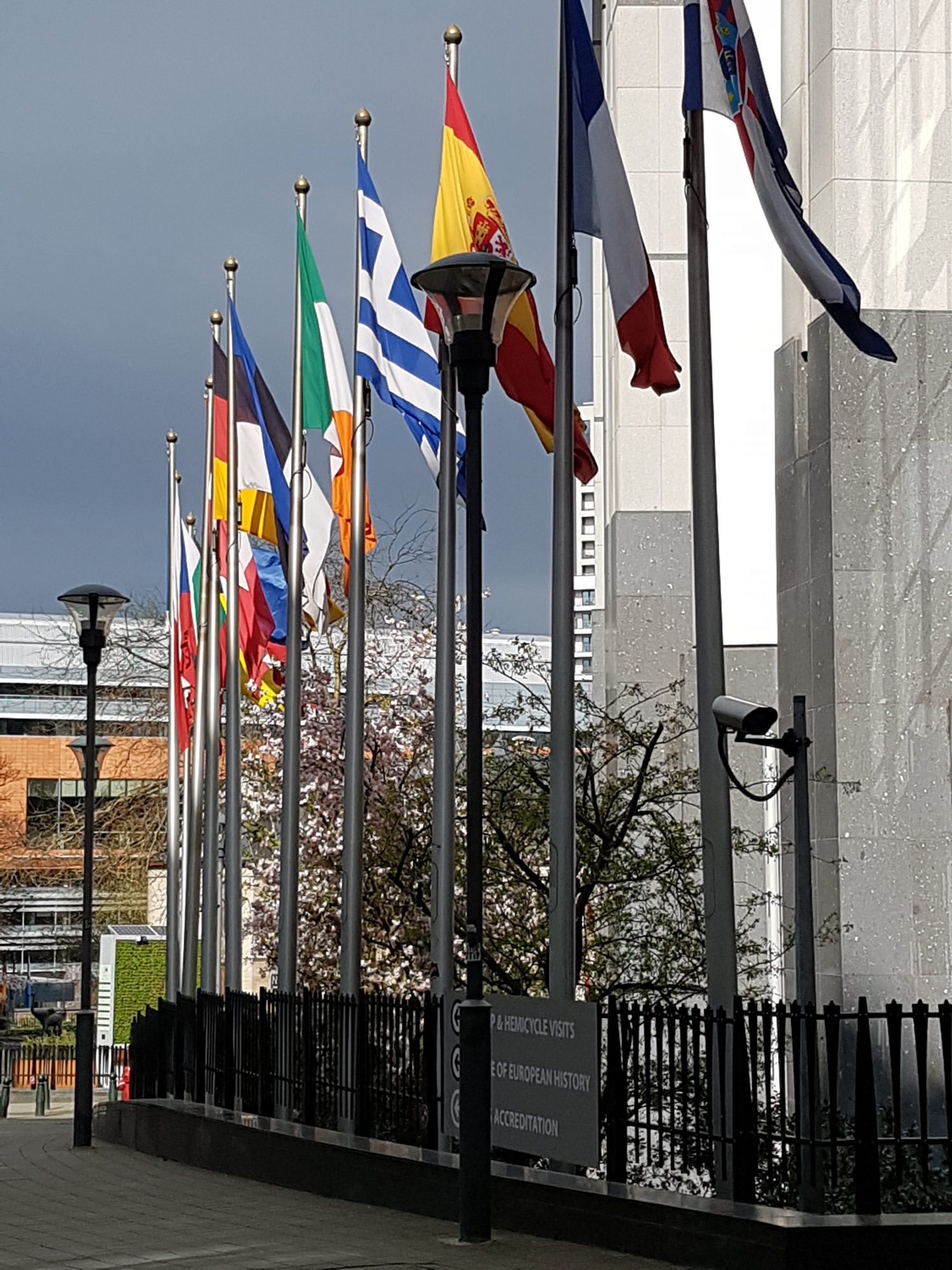 On the evening of Monday 9th April, I arrived in Brussels for the start of a 3 night, action-packed visit. I was staying at the home of Laura Shields, former head of the Brussels & Europe LibDems, now Media Consultant for British in Europe. Laura had invited me to speak at the LibDem conference in 2016, & we marched together in London. Laura was on holiday, but kindly offered me her home, & the company of her adorable cat.

The main reason for my visit was to attend the first ever screening of “Postcards from the 48%” – the film looking at Brexit from the Remain perspective – an event being hosted by Catherine Bearder MEP in the European Parliament.

Whilst in Brussels, I aimed to see as many MEPs as possible, especially those on the EU Citizens Taskforce. My intention with all MEPs was to discuss citizens’ rights issues, then use that as a lead into, “the best way to secure our rights is to Stop Brexit”, so I could move on to discussing our plan A. It seemed that the MEPs had much the same idea, as it became clear very quickly that stopping Brexit was their priority too. On citizens’ rights issues, however, I’m pleased to report that they all seemed very well informed on the issues outstanding & the current state of play.

I met with 3 British MEPs, Seb Dance, Julie Ward & Jean Lambert, as well as with 2 Spanish MEPs, Beatriz Becerra & Terésa Giménez Barbat. I can honestly say that everyone was absolutely charming, very appreciative & knowledgeable about what we do, & very keen to discuss how we can work together. To see so much passion amongst politicians for the European Union is both energising & heart-warming, & it was abundantly clear that they all work extremely hard & are totally committed. If only I could say the same about some of the politicians I have come into contact with in the UK. 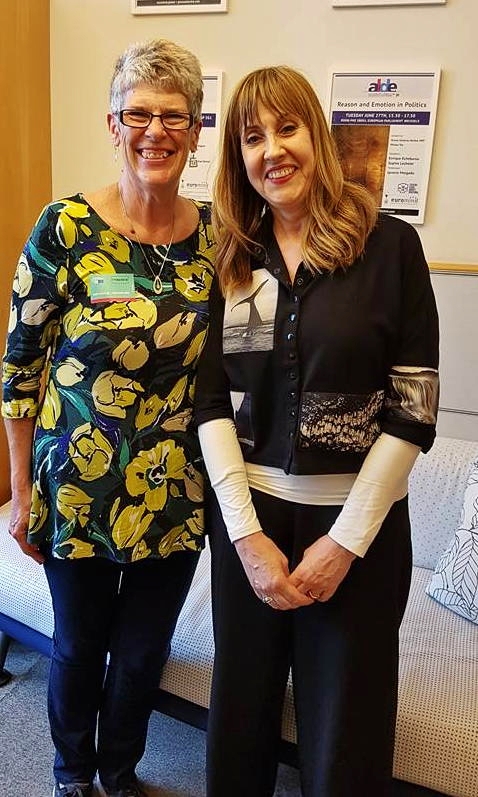 The reason for the meeting with Terésa Giménez Barbat was because she has nominated Bremain in Spain for the “European Citizens Prize”. There will a lot of competition of course, as every MEP can nominate a person/group, but to be nominated alone is an honour in itself, & it came from a MEP that I did not know beforehand. I had assumed that the nomination was in relation to our citizens’ rights activities, but no, it’s due to our anti-Brexit pro-EU position & campaigning. To say I’m chuffed would be an understatement! 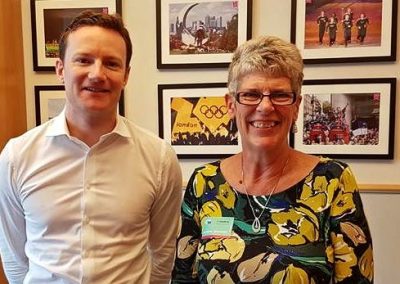 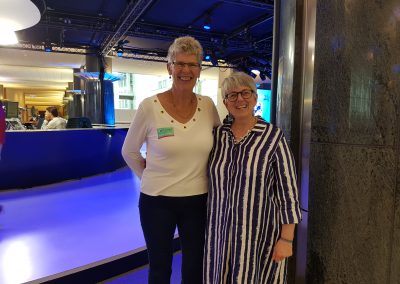 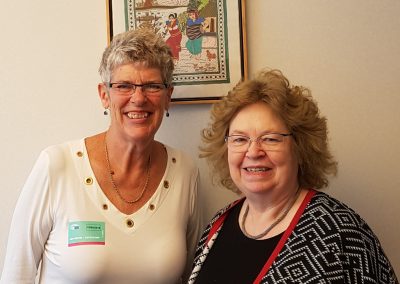 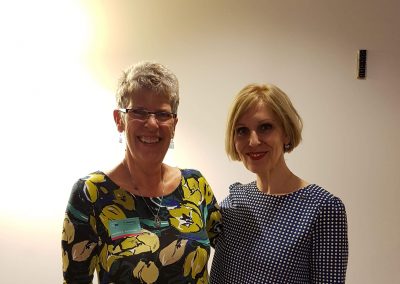 The screening of David Nicholas Wilkinson’s film took place in the European Parliament on the evening of Tuesday 10th April – a fitting date being the 20th anniversary of the Good Friday Agreement. 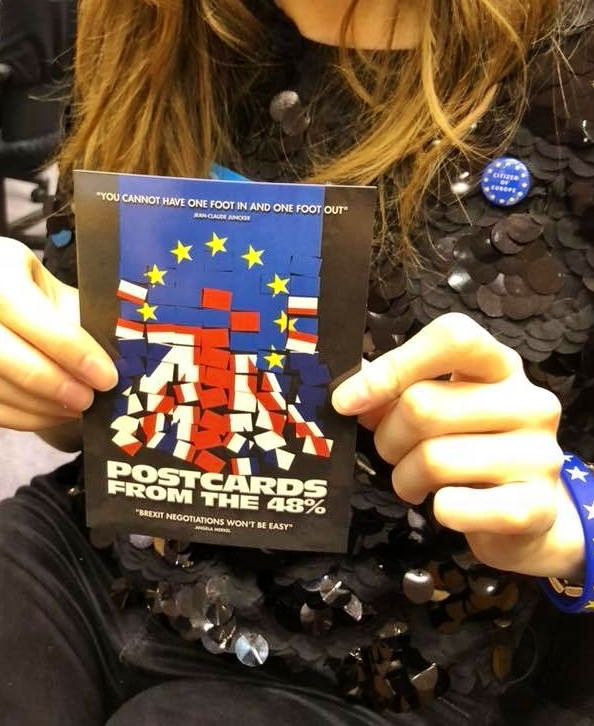 Remain campaigners from groups large & small had travelled quite considerable distances to attend, many hoping to get a glimpse of themselves or their friends on screen. The movie itself was excellent, & there were some strong arguments made by Remain campaigners from all walks of life, from well-known faces like Prof. A.C. Grayling & Miriam Margolyes to marchers & campaigners right across the UK. It was a strange experience to see myself on the big screen, but I was pleased to have a couple of quotes included, & also to be spotted at a couple of important events, like the Gina Miller case at the Supreme Court. 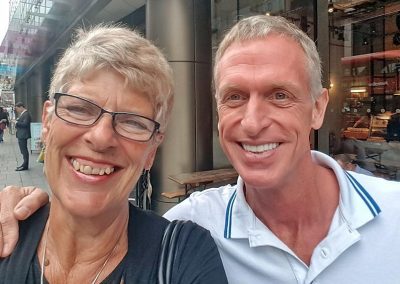 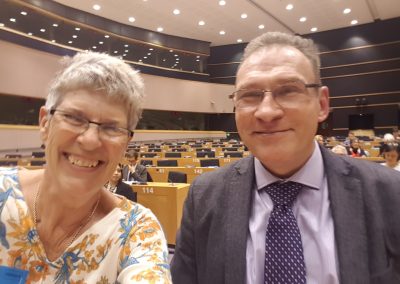 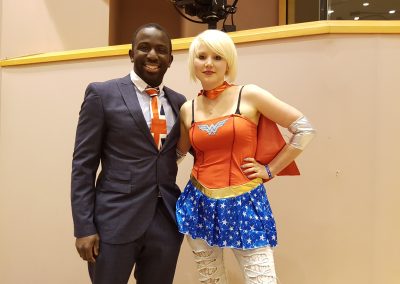 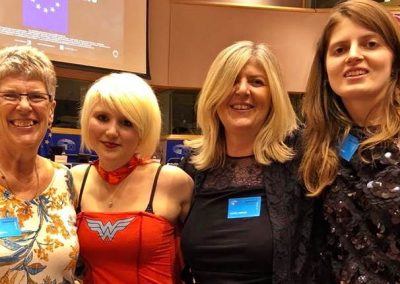 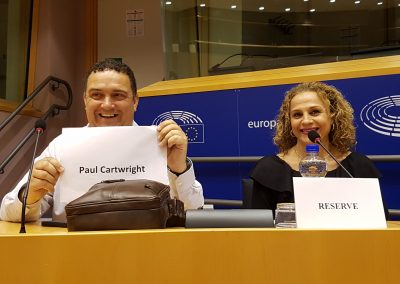 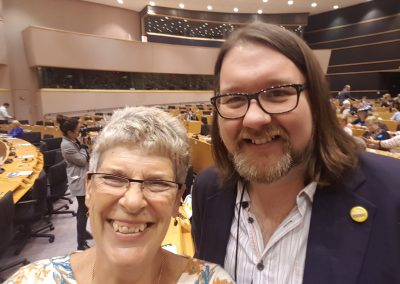 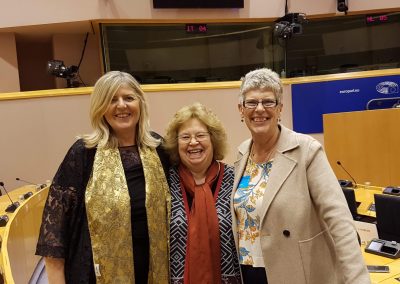 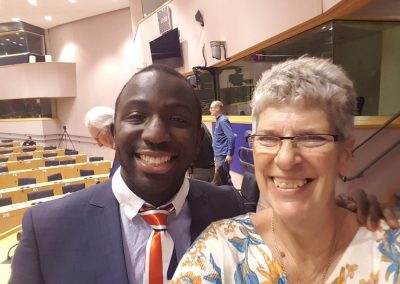 Femi from OFOC and Sue

Following the screening, I had been invited by Catherine Bearder to speak & answer questions, on a panel that also included Femi & Sir Andrew Cook. We were each given 5 minutes to introduce ourselves, then questions were thrown open to the floor. Catherine went first, followed by Femi, then Andrew, with me speaking last. I had prepared notes, with the intention of speaking for 1 minute about citizens’ rights, then concentrating on our Stop Brexit campaigning, but I went off piste! Sir Andrew Cook, who had spoken very well against Brexit in the movie, started his speech by stating his Tory credentials – he was a friend of David Cameron & a big Tory donor. He then went on to say that he respected the referendum, & that we should be working to get the best deal when we leave. The audience, not to mention the panel, were stunned into silence, & I felt that I couldn’t let that go without comment. I apologised for going off script, & suggested that anyone who wanted to know what I had planned to say asked me afterwards in the pub. Instead I made it very clear that we do not respect the referendum result, we will never accept Brexit & that this is far from over. As you can imagine, that went down rather well, & Madeleina Kay tweeted about it immediately:

The wonderful @Suewilson91 bossing it like a pro in the #europeanparliament 😍 sir Andrew Cook telling us we have to accept the vote, Sue from @BremainInSpain responds by saying “I will never accept #Brexit” 🤗 pic.twitter.com/gY2tVSYdvO 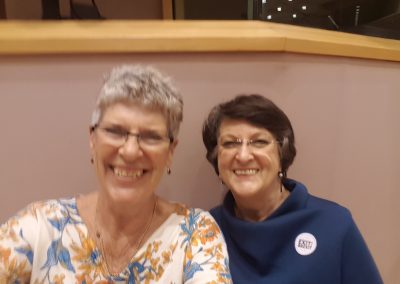 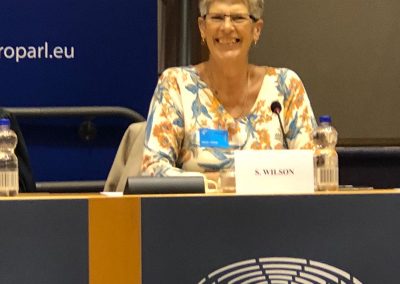 Sue on panel at European Parliament 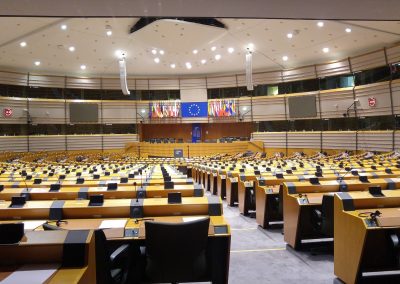 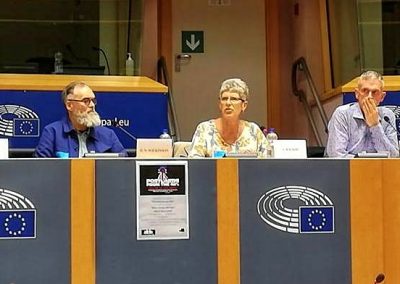 The evening ended with us all being invited to supper by Catherine Bearder in a local Irish pub, which seemed very appropriate bearing in mind the anniversary.

The next day, apart from my scheduled MEP appointments, was full of surprises. It was Guy Verhofstadt’s 65th birthday, & Madeleina Kay had arranged to meet Guy’s Media Head to deliver presents & a card signed by 1200 people. Madeleina invited me along & we met 3 members of Guy’s team, expecting only to hand over our gifts. As we approached Guy’s office, the famous Union Jack fridge came up in conversation. I commented that getting a photo with the fridge would be almost as good as a photo with the man himself, & the response was that I should tell Guy that. At this point, Madeleina & I were starting to think we might actually get to hand over our presents in person, which is exactly what happened. We even got to sing Happy Birthday to him, & he seemed genuinely pleased with all the gifts & the sentiment – a real & unexpected treat. 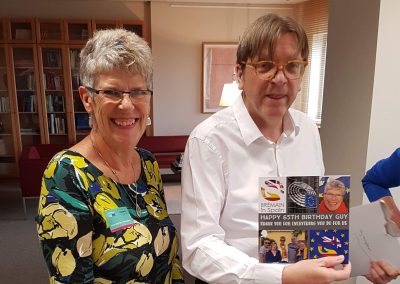 Guy with his Bremain Birthday Card 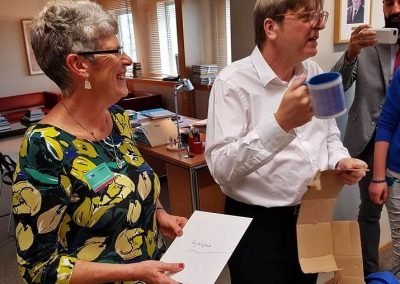 Guy with his Bremain Mug 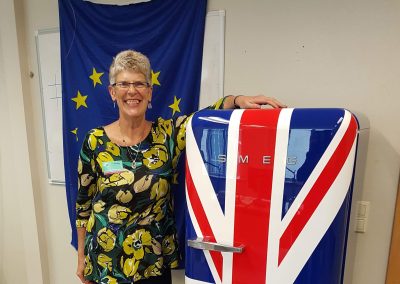 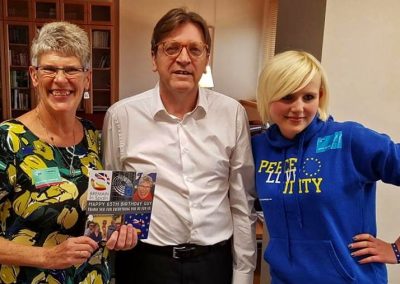 I had another unexpected pleasure that evening, having been invited to dinner by Terésa Giménez Barbat, who had also invited A.C. Grayling. He was to appear as a speaker at a convention Terésa had organised the following day, & I had the pleasure of sitting next to him at dinner. The food was amazing, all five courses of it & definitely outside my price range, but the company, which included 2 Spanish journalists, was the icing on the cake. Grayling suggested that I must stay in politics once this whole Brexit nonsense is cancelled, & that there was much work to do to correct all the wrongs in British politics. I told him that, to be honest, I was more interested in future European politics than British politics, so he suggested I become an MEP! Terésa’s ears pricked up at this point, & she said I’d need to be quick as Spain had only allocated 4 extra seats from those the UK would lose due to Brexit. I told her not to bank on gaining any seats, as the UK wasn’t going anywhere! 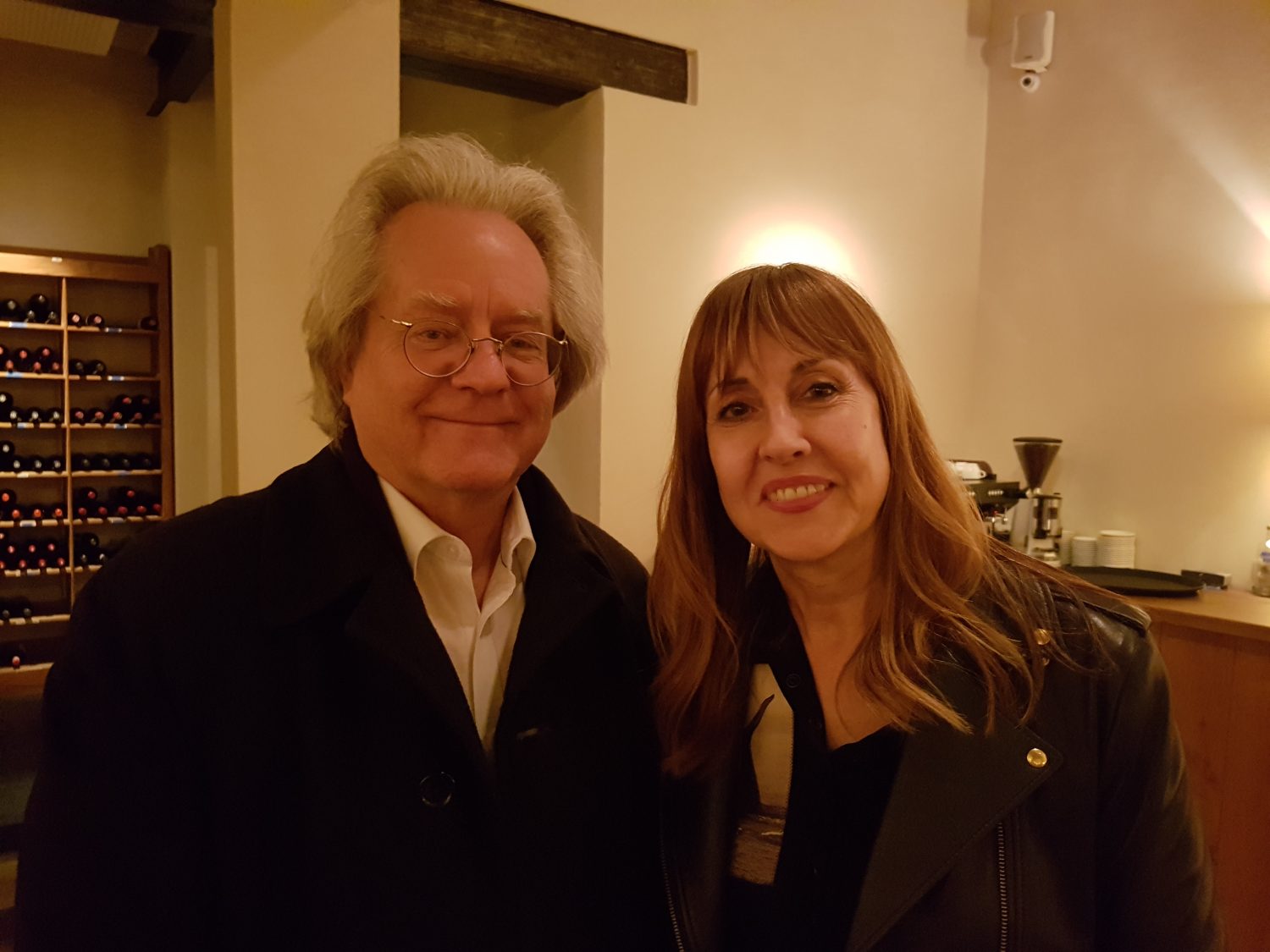 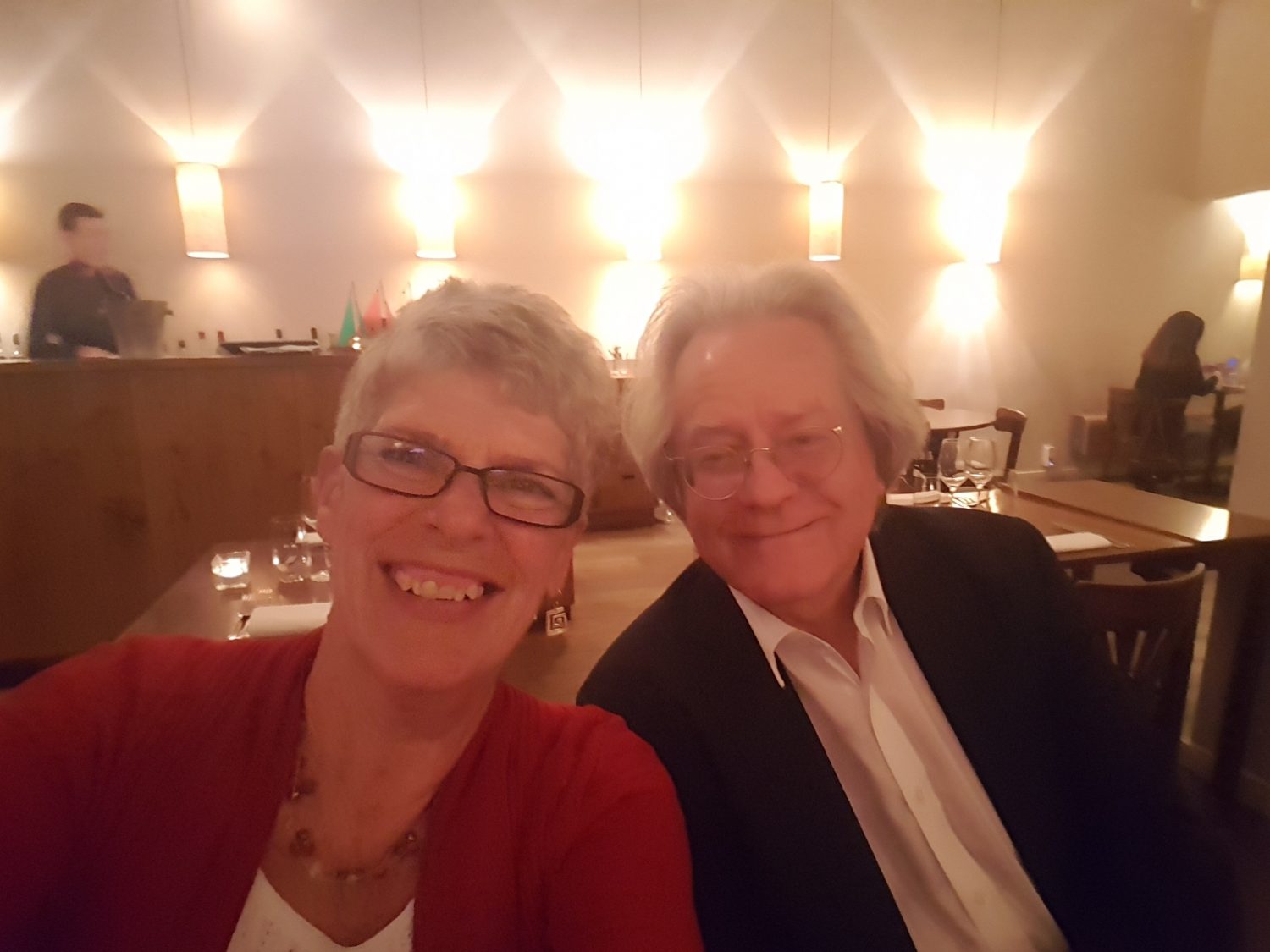 This was only my second trip to Brussels, but I’m really starting to love the place, especially walking around the European Parliament. It’s like a village, with its own shops, cafes, even a hairdresser, but the wonderful thing for me is the feel of the place – so diverse, so European, so many different voices & accents. It feels like home.

I had an amazing trip & I’m really looking forward to building on those new relationships, & hopefully visiting again soon. I do wonder though if campaigning against Brexit really ought to be this much fun!