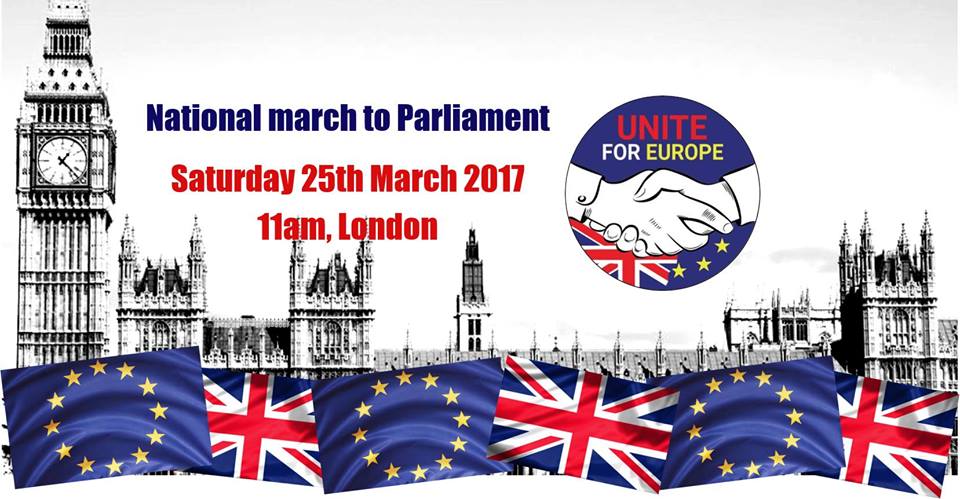 Unite for Europe is being organised by a collaboration between several pro-EU groups, representing a broad spectrum across the UK and also expatriates.

We want to remain in the European Union!

What can we achieve?

We can embolden our elected representatives. The vast majority of our MPs support our membership of the European Union, but they need to know that we still do too – and just how many votes there are in adopting a pro-EU position. There is a long, unpredictable, road ahead that Parliament will have some (hopefully much!) control over; with our vocal support, they can stop Brexit.

We can change minds. As the damage of Brexit reveals itself over the coming months, we can help sway public opinion with our demonstration of support for the European Union and all its benefits.

We can send a message of goodwill to our European friends and neighbours.

There are two core reasons:

Unite for Europe is timed to coincide with the UK Government’s stated intention to trigger Article 50 by the end of March 2017. We anticipate that due legal and Parliamentary process will prevent this happening significantly sooner.

Everybody who wants to must be able to attend this march. March 25th allows expats and those in more far-flung regions of the UK time to arrange their transport to London. Additionally, if Unite for Europe were held sooner, the wintery weather of January and February would pose a risk to the success of the march.

We will be marching to Parliament. The exact route will be finalised when we have an indication of the number of marchers attending. The start location will be advertised on the website, on the Unite for Europe Facebook and Twitter accounts, and in the national press.

What should I bring?

Layers of clothing, including waterproofs. Wear blue and yellow!  Snacks and (non-alcoholic) drinks.

Unite for Europe is being organised by a collaboration between several pro-EU groups, representing a broad spectrum across the UK and also expatriates. If you have any questions, suggestions, or if you or your local group would like to get involved, please contact them via: