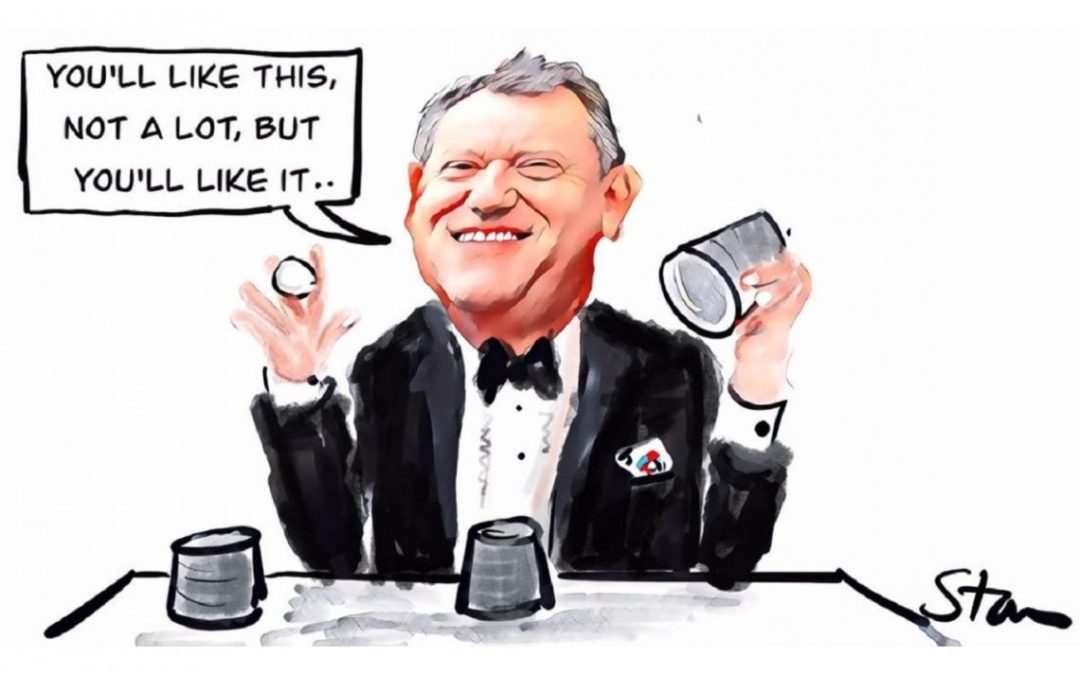 This week Lord Frost came up with a series of explanations for why the Brexit deal isn’t working, none of them being his fault writes Bremain Chair Sue Wilson MBE for Yorkshire Bylines.

Whatever’s wrong with the Brexit deal – and according to Lord David Frost that’s quite a lot – it’s someone else’s fault. On Tuesday, Lord Frost, former chief Brexit negotiator, was giving evidence to a House of Commons select committee. The public administration and constitutional affairs committee (PACAC) was taking evidence on the subject of ‘Scrutiny of International Treaties and other International Agreements’.

We are now questioning @DavidGHFrost, the former UK Chief Negotiator, Exiting the EU & Task Force Europe, as part of our inquiry into the Scrutiny of Treaties and other international agreements.
Watch live on @BBCParliament or https://t.co/LDuH7fYuDi pic.twitter.com/aQK08fCgQC

Over the course of 90 minutes, while giving his evidence, Frost was ready to lay blame at a number of different doors. Whilst his comments and suggestions on how future negotiations might be improved were welcomed, his failure to take responsibility for the current sad state of play cannot have gone unnoticed.

Frost suggested that parliament should have more scrutiny and be more actively involved in future trade negotiations. They should be given time to express their views and should have the opportunity to vote yes or no on any significant international trade deals, ahead of their ratification. So far, so good.

Lord Frost tells us that it was not clear what @UKParliament wanted from the Brexit negotiations in 2019.

However, parliament was apparently at fault during the Brexit negotiations. Firstly, they were “conflicted” and were “not clear” what they wanted from the negotiations in 2019. Frost criticised parliament for what he called the “Surrender Act” – the bill that prevented the UK leaving the EU without a deal. Running things from parliament was a “Cromwell-style takeover”, and legally blocking a no-deal Brexit had hampered his negotiating efforts.

According to Frost, this “hugely undermined” the UK negotiating hand. This then resulted in the UK having to “agree more or less what was imposed on us in order to be able to move forward and deliver the referendum result”. Frost said parliament seemed not to want to deliver on that result, describing the whole situation as “extremely unsatisfactory”.

Lord Frost tells us that there was a "Cromwell style take over, running things from parliament" in 2019 and this shredded a number of constitutional norms.

John McDonnell MP told Frost that it seemed as though he thought “parliament was blocking the ‘will of the people’”. In fact, McDonnell said, parliament was merely “trying to get the best deal possible”

Frost suggested that negotiations were hampered by a lack of experts and a lack of support staff. The fact that, for the last 40 years, the EU had done all the negotiating for us, meant a lack of relevant experience. But the issue was not just about numbers, or levels of expertise. Those pesky civil servants were “political”, and not necessarily on the same Brexit page as the government. Far better to recruit special advisers, presumably at considerable expense, who wouldn’t question government plans, motives or orders.

Lord Frost says that he thinks Parliament will need to increase the resources and support in order for Committees to properly scrutinise international agreements, including legal expertise, trade expertise and greater domestic expertise.

May and the meaningful votes

In time-honoured Conservative fashion, the previous administration was clearly going to come in for criticism and blame. Theresa May’s ill-advised, and pointlessly self-inflicted, general election was a significant factor. Having destroyed her own majority, getting Brexit through parliament then proved to be impossible. A series of “meaningful votes” undermined the UK’s position, Frost said, and encouraged the EU to believe reversing Brexit was not only desirable, but possible.

Lord Frost tells us that in his view the sequence of failed Meaningful Votes undermined the UK Governments negotiating position and led the EU to think that the referendum result could be reversed.

The worst criticism of May’s handling of Brexit, however, was Frost’s interpretation of it being a “soft” Brexit. It certainly didn’t feel very soft at the time. But to Frost, the ‘backstop’ arrangement – that allowed the UK to stay in the customs union and parts of the single market – was several steps too far. May’s commitment to Northern Ireland alignment had been “damaging”. All would have been fine, Frost suggested, if he had not “inherited stuff”.

A “fundamental misunderstanding” by the EU

Frost directed much of the blame at the European Union. There was plenty about the withdrawal agreement that the government didn’t like, but efforts were concentrated on changing the backstop. Johnson’s comments regarding Northern Ireland were “not misleading”, Frost said, but were “misinterpreted”. Frost described his “brutal and confrontational” approach as appropriate and effective. “In the end, it worked”, he said.

With regards to negotiating a trade deal, Frost claimed that a zero-tariff free trade agreement was “very desirable” but not at any cost. Some things, he said were more important. Such as, “sovereignty, removing the [European] courts, no legal constraints”. He added that, “we weren’t willing to sacrifice those to get zero tariffs”. On this matter, there was a “fundamental misunderstanding” by the EU. Unlike the fundamental misunderstanding of the British government as to the type of Brexit the public wanted, or voted for.

The final, and most bizarre, scapegoat for Brexit negotiation failures was the Fixed Term Parliament Act. Frost described the act as “one of the factors” preventing the negotiations from running smoothly. A bemused McDonnell said this was “an interesting new theory about who to blame for some of the negotiating problems that we had”.

Frost is not responsible, it seems, for the deal he negotiated, praised, resigned over and now criticises at every opportunity. It was the lack of resources, the EU, parliament and Theresa May. Like Johnson, he refuses to accept personal blame or responsibility for where we are or where we are heading.

Karin Smyth MP asked Frost if his approach had been “honourable”. The fact that the government is imminently planning to override the UK/EU trade deal with controversial, and likely illegal, legislation would rather suggest otherwise.

If the PACAC committee really wants advice on how to improve future international treaties and agreements, maybe they should ask some real experts. Ones who admit their mistakes, learn from them and put co-operation ahead of confrontation. Brussels might be a good place to start.