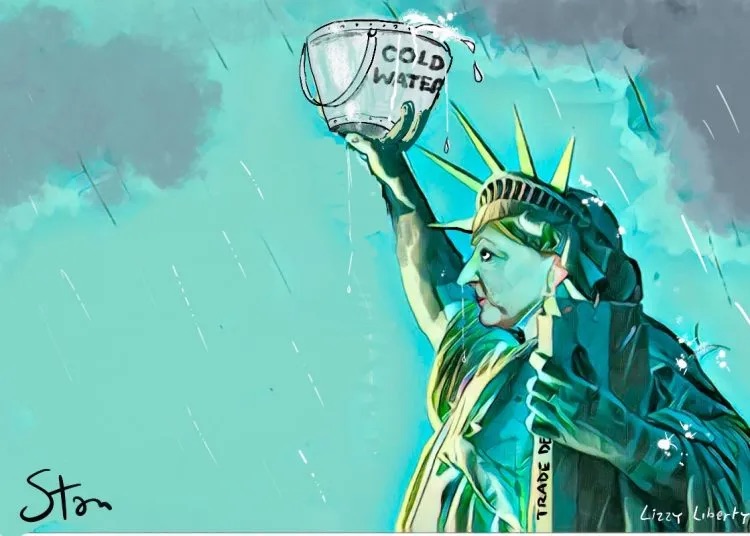 Waking up to the reality of Brexit – our biggest trading relationship is destroyed and we can’t conclude one with the world’s biggest economy writes Bremain Chair Sue Wilson MBE for Yorkshire Bylines.

Before Liz Truss had even got her feet under her desk at Number 10, she was already preparing her excuses. In advance of her meeting with the President Joe Biden, she was telling the country why a free trade deal with the US was not on the cards. Probably for years.

As world leaders assembled in New York on Wednesday for the United Nations summit, Biden and Truss were preparing to meet. It appeared as though both would come to the table with very different agendas. The president’s national security advisor, Jake Sullivan, had already made it clear that Biden would want to discuss the Northern Ireland protocol “in some detail”. Truss, meanwhile, was insisting that a UK/US trade deal was not on the agenda and there were no negotiations currently taking place. “I don’t have any expectation”, she said, “that those are going to start in the short to medium term”. That timescale looks certain to be after the next general election.

BREAKING: Britain may not strike a free trade deal with the US for years, Liz Truss has admitted ahead of her first bilateral meeting with Joe Biden.https://t.co/F5GyJwXrnZ

Waking up to reality

On becoming trade secretary in 2019, Truss regarded a trade deal with the US as her main priority. She was “confident that things were moving in the right direction”. Not any more, it seems.

It was also seen as a major priority for Boris Johnson when he became prime minister. Not only was it regarded as a seemingly straightforward task to do a “great deal” but we’d be “first in line”.

A former adviser, Ben Ramanauskas, said Truss “did try very hard” in earlier negotiations with Biden but was now forced to accept that “reality” had caught up with her. A trade deal with America was, according to the BBC, now “on the back burner because Truss knows it is unattainable”.

“We will do a great deal with the US and it will open up opportunities for UK business, particularly service companies in the US” (Boris Johnson)

Not so special relationship

The most pressing issue affecting any potential trade deal, for Biden at least, is the Northern Ireland protocol and protecting the Belfast Good Friday agreement (GFA). While Truss insists that the government’s controversial Northern Ireland protocol bill itself provides protection for the GFA, it is not a position that many outside the government support. Least of all, the US president. While Truss will be seeking to distance any discussions of trade deals from those on the protocol, Biden will be keen to link them inextricably together.

However, not all issues surrounding trade negotiations, or the ‘special relationship’ between the two countries relate to the protocol. On the UK side there are issues – for the British public and farmers, at least – relating to food, health and animal welfare standards, such as hormone-treated beef and chlorinated chicken.

On the American side, there are issues over policy – currently British economic policy. As Truss admitted that her economic proposals would benefit the rich the most, Biden said he was “sick and tired of trickle-down economics”. The Americans, he said, were “building an economy from the bottom up and middle out”. The right-wing economic theory – suggesting that cutting taxes for the wealthy would “trickle down” to the less well off – “has never worked”, he added. Although not a specific condemnation of Truss and her policies, Biden’s comments ahead of their meeting will not have improved already strained relations.

I am sick and tired of trickle-down economics. It has never worked.

We're building an economy from the bottom up and middle out.

If the mood music before the meeting was cool, Biden and Truss made an effort at the UN. Presumably keen to demonstrate their similarities of purpose rather than their differences, Truss described the US and UK as “steadfast allies”. The words ‘special relationship’ were never uttered.

Both sides reiterated their commitment to the GFA, even though they have very different ideas on how to provide the protection they both seek. Biden said he was looking forward to hearing what was on Truss’s mind and to further discussing how to make sure that the GFA was “upheld into the future”.

The president is planning a state visit to the UK in the first half of 2023 to mark the 25th anniversary of the GFA. In effect, the visit will provide a deadline for resolving the issues surrounding the protocol.

With the prospect of a quick trade deal with America dissolving, Brexit supporters are attempting to change their stories. A US/UK trade deal was never promised, they say. It’s not important to the UK economy, they say. And the always familiar Brexiter refrain, they need us more than we need them.

Alternatively, they say that everything is going to plan/going well, or going exactly as they anticipated. Or that all will be well if we just wait long enough. In other words, the same tired excuses and lies we hear every time the truth about Brexit becomes blindingly obvious, even to those wearing rose-tinted goggles.

So no US trade deal. Another of the big Brexit lies nailed. And on they go pretending it is going to plan, going well, can be made to work and none of our economic problems have anything to do with it. Liars and charlatans. They should never be allowed anywhere near power again

The pro-Brexit campaigns sold the prospect of doing free trade deals around the world – and especially with America – as one of the biggest wins of leaving the EU. Even as recently as August 2020, the Expresswas talking about a “Brexit trade breakthrough”, with a headline claiming that the Remainers had been “silenced” as a “brilliant US/UK future deal plan revealed”. Just this week, their own headline tells a very different story, as they admit that the deal “might take years”, and describe Biden as “uninterested”.

Having witnessed the kind of harmful compromises the British government have already made when making post-Brexit trade deals, many will see any delays to a US/UK deal as a relief. Not least British farmers, and the British public, concerned about the cost to our valued health and food standards.

As regards the damage to our economy that a failure to secure a deal would bring, this perhaps is the least of our economic concerns. Damaging as the situation might be, it pales into insignificance when compared with what we have already lost.

Behind all the talk about growth are two simple truths. They have destroyed our biggest trading relationship and can't conclude one with the world's biggest economy. https://t.co/livibyaXnd

If leaving the EU was about enabling our freedom to deal independently with countries around the world, it has failed. Either the Brexiters were lying or they were overly optimistic about their own talents. Or both. In the process, they have destroyed our biggest trading partnership with our closest and most important neighbours, and without accepting any responsibility whatsoever. That’s more than just a spectacular failure. It’s criminal negligence, and they seem to be getting away with it.

Biden is smart. He can see through this government’s nonsense. Thankfully, finally, it would appear that the British public can too.