Interrogating the prime minister on Ukraine, partygate and the cost-of-living crisis 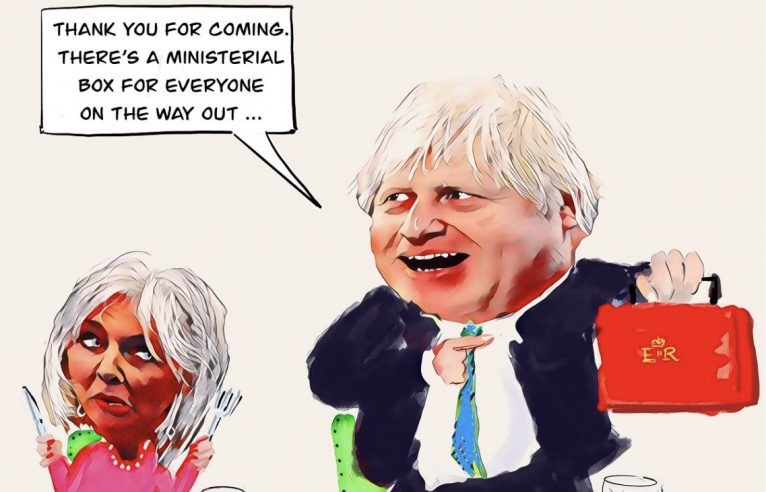 Johnson appeared before the Commons liaison committee to answers questions on the situation in Ukraine and the cost-of-living crisis, writes Bremain Chair Sue Wilson MBE for Yorkshire Bylines.

On Wednesday 30 March, Prime Minister Johnson appeared before the Commons liaison committee to answers questions on the situation in Ukraine and the cost-of-living crisis. This was the second time in a few hours that Johnson was asked difficult questions, having attended prime minister’s questions (PMQs) just three hours earlier.

Partygate added to the agenda

Before getting to the main topics, Betts raised the issue of the 20 Fixed Penalty Notices (FPN) issued by the Metropolitan Police the day before. Pete Wishart (SNP) asked Johnson if he was one of the 20 recipients, and if not, whether he expected to receive a fine in due course. Johnson replied, “I’m sure you’d know if I were”, before reverting to a now common theme of not giving “a running commentary” on an ongoing investigation.

Johnson in front of the Liaison Committee, claims the ministerial code and his conduct are matters personal opinion and, if he is fined, he will come back to be "interrogated". In my view, a crystal clear indication that he has no intention of resigning, even if guilty. ~AA pic.twitter.com/PtTELnh57g

Wishart suggested that if Johnson were served with a fine he would be “pretty much toast” adding that “no prime minister could survive” being found guilty of criminality. When Johnson refused to even acknowledge any criminality had taken place, Wishart listed Johnson’s many and varied prior excuses. He added that it was “crystal clear” that Johnson had broken the ministerial code and this was a “resignation issue”. The public, he said, would be “frustrated and disappointed” with Johnson’s non-answers. Johnson again refused to comment, saying he would return to be “properly interrogated” by the committee, and parliament, once the investigations had concluded.

Catherine McKinnell pressed Johnson about “whether any laws were broken”– especially in light of the FPNs. He refused even to acknowledge that simple fact, saying “I’m not certain of that. You may know something that I don’t”.

Both Wishaw and McKinnell drew attention to the insensitivity of holding a lavish dinner on the anniversary of the Covid memorial. Johnson’s response was to say how incredibly hard the government had worked during Covid and how proud he was of their achievements. He described the government’s record on handling the pandemic as “pretty remarkable”.

Tom Tugendhat (Conservative) asked Johnson of the value of President Macron continuing discussions with Putin. Johnson said Putin was “clearly not to be trusted”. He added that it was not the objective of the UK government to remove Putin from power, despite President Biden apparently wishing to do so. Tugendhat also asked about additional military and civilian assistance. Johnson wouldn’t be drawn into specifics but said the government was looking at “going up a gear”.

Johnson said the UK should “continue to intensify sanctions with a rolling programme” until all of Putin’s troops are out of Ukraine. When questioned, Johnson said this included Crimea, but wouldn’t be drawn with regards to Georgia.

Sarah Champion (Labour) had previously written to Johnson with regard to the £400m humanitarian aid pledged by the government to supporting Ukraine. As Johnson had failed to reply to her letter of 9 March, she again asked how much of the pledged funds had actually reached organisations in Ukraine, in other countries and in the UK. Johnson would have to get back to her, he said

Dame Diana Johnson (Labour) asked if the prime minister had given consideration to an emergency humanitarian visa, especially as the family visa was so complex and was causing confusion. He wanted a “light touch”, he said, and didn’t seem to appreciate the difference between the two options.

Dame Johnson pointed out that just 1 percent of applications for Homes for Ukrainians had resulted in a visa. Both agreed that the British public had shown enormous generosity, with 200,000 people having signed up to the scheme to offer accommodation to refugees – rather different to the figures of 2,700 granted visas.

"We must match our words on Ukraine with action." Boris Johnson, speaking to the international community, 6 March 2022

Those were the words. Here are our actions. ~AA pic.twitter.com/nIz1JOCNUN

Chair Betts asked Johnson to confirm the funding arrangements, as different committees had previously been given different versions of the details. Johnson confirmed that under the Homes for Ukrainians scheme, local authorities would receive £10,500 per annum, per person. However, he confirmed that under the family reunion scheme, there was no financial support for local authorities, despite the costs being the same.

He described the access to free travel, education, benefits etc – without any additional local authority funding – as “a considerable package of support”. Johnson was unable to explain the difference between the two schemes in terms of the demands they would make on local council budgets.

Conservative MP Neil Parish raised the issue of rising food prices, and concerns over food production in Ukraine, the “bread basket of Europe”. In response to concerns over food and drinks exports, Johnson insisted UK exports are “colossal”.

Concerns were raised by Philip Dunne (Conservative) about the burden of rising fuel costs. Johnson stated that the UK had “failed for a generation to put in enough long-term supply”. He blamed the Labour Party for the failure to commission more nuclear power stations, saying that nuclear had “massive potential”. Johnson admitted that nuclear was a long-term solution and unlikely to make a difference for a decade. However, “I’m optimistic”, he said, “we’ve shown that we can do things fast”. A cue, naturally, for a mention of the booster vaccination roll out.

Johnson dismissed Dunne’s questioning of the government’s recent commitment to net zero, made at the COP26 conference. Johnson said the net-zero ambition “had not been adulterated or lost”.

Labour’s Stephen Tibbs challenged Johnson over his recent misrepresentations, at PMQs, of numbers of people in work. Eventually, Johnson accepted Tibbs’ point, but not without declaring that the government’s employment record was “outstanding”. Johnson insisted he had since corrected the record – Tibbs said he was unaware of such a correction. Hardly surprising considering no such correction has been made.

The Prime Minister told MPs earlier he “thinks” he’s taken steps to correct the record on false claims about employment.

Tibbs went on to query why no help was offered in the spring budget for unemployed people on benefits, struggling with fuel bills. The unemployed would see the percentage of their income spent on fuel costs rise from 20 percent in 2020, to 25 percent in April, to 47 percent in October. Johnson said he knew “how tough it is”, going on to say that priorities had to be set, in the best interests of the country. The government’s pockets were not bottomless and raising taxes was to be avoided at all costs. “We are better off”, he said, “helping people into work”.

Mel Stride (Conservative) raised the issue of trade as a percentage of gross domestic product (GDP), and the impact of Brexit on post-pandemic recovery. All countries had seen exports dip due to the pandemic, but where EU countries had recovered, the UK had not. When challenged to predict how long it may take the UK to recover to pre-Brexit levels, Johnson refused to prophesise, saying there was “no natural impediment to our exports”. All it takes, he said, is “just will, energy and ambition”. But not a strategy, apparently.

Only the “right people” are welcome

A failure to answer questions, a reliance on unsupported optimism or a retreat into meaningless rhetoric are now the norm for our prime minister. However, on this occasion Johnson was not responsible for the most disturbing assertion of the day. That came from Sir Bill Wiggin. At a time when the British people are opening their hearts and homes to desperate refugees, the Conservative MP for North Herefordshire expressed concerns that only the “right people” be let into the UK. Those “right” people include wealthy Qataris, apparently, but definitely not anyone arriving by rubber dinghy across the Channel.

We are all holding our breath for the day we will finally have a government that demonstrates honesty, realism and compassion. Only then will we be able to claim to have the “right people” running the country.