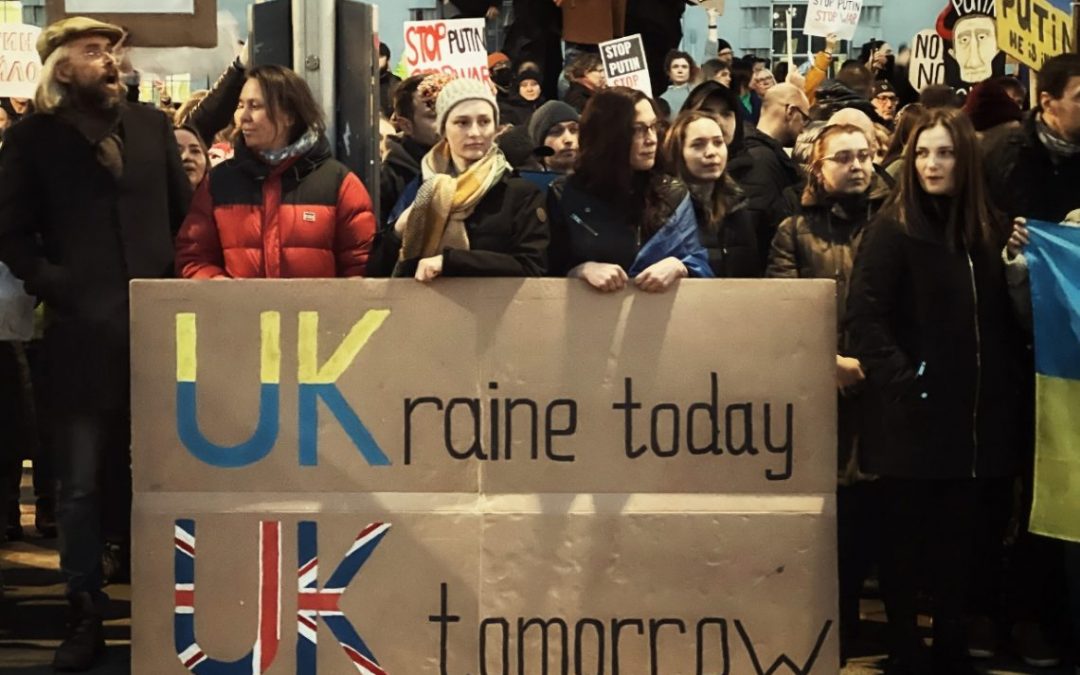 The government’s handling of Ukraine refugees is a “total disgrace”, the Home Office could and should do better, writes Bremain Chair Sue Wilson MBE for Yorkshire Bylines.

When Shadow Home Secretary Yvette Cooper addressed Home Secretary Priti Patel at the despatch box on Thursday, she expressed feelings that much of the country could associate with. Showing passion, frustration and anger at the woeful government response to the Ukrainian refugee crisis, Cooper pointed out the shocking inadequacies and failings of the Home Office scheme.

Yvette Cooper – Why does it always take the Home Secretary to be dragged into the HoC to make basic changes to help vulnerable people.. her response has been a total disgrace… if she can't sort this out, frankly, she should hand the job over to somebody else who can. pic.twitter.com/cVvvyiXsSZ

Cooper described the government’s response to the Ukraine refugee crisis as a “total disgrace” and highlighted the fact that Patel had to be “hauled into the House of Commons to make basic changes to help vulnerable people” fleeing Ukraine. She acknowledged some progress since last week but criticised the slow pace of action, especially considering that the government has known about a likely Russian invasion for weeks.

Ukrainian refugees left out in the cold

Meanwhile, desperate Ukrainian women and children are facing a bureaucratic nightmare, often waiting outside warm, relatively empty buildings for hours in freezing temperatures. Worse still, when they finally start the complicated visa application process – assuming they have made or can get an appointment – they have been sent to another town, or even another country, to continue their application.

The list of requirements is lengthy, and would be a bureaucratic nightmare under normal circumstances. Add in the complexities of fleeing a war zone in haste, often without even a suitcase, and demands for proof of residency or the production of a utility bill make even less sense and are even more degrading and inappropriate. Many refugees will be lucky to escape with their passport, let alone any other paperwork required by the British authorities. Thankfully, the system is being improved to allow online applications, though many won’t be able to take advantage of this addition to the process.

#KayBurley – Ukrainians are having to jump through hoops to apply for a visa into the UK.. these are people fleeing from war.. we need to do something about this?

James Heappey – It's a hard job being Home Secretary

KB – It's hard to flee a war. pic.twitter.com/lNFDSMV2Rw

A risk to national security?

In a ridiculous attempt to justify their position, the government is insistent that the extensive checks and bureaucratic hurdles are necessary to protect our security. Despite the fact that the applicants are vulnerable women and children, almost exclusively with family in the UK, apparently they are a potential security threat.

Not only does the government, presumably genuinely, believe that Russia will take advantage of this crisis and import spies to the UK amongst the refugees, but it has criticised Ireland for their “liberal policy”. A government source told The Telegraph that, “Ireland has basically opened the door to everyone in Ukraine”, creating a problem due to the lack of biometric checks in the common travel area.

In addition to claims made by the home secretary, government ministers and MPs have been doubling down on the rhetoric.

Interviewed on Sky News, James Heappey, representing the Ministry of Defence, said it was “a hard job being home secretary”. Not as hard as being a refugee fleeing a war zone, Kay Burley reminded him. On BBC Breakfast, Charlie Stayt asked Heappey why refugees couldn’t be brought to the UK and the paperwork sorted out on British soil. Heappey reiterated that the home secretary “has to weigh that up against risk”. He added, “we are not making the mistake of dropping our guard altogether”. In response, Stayt suggested that the premise that women and children escaping a war zone are a security risk was “bogus”.

Charlie Stayt – Why not bring ukrainians to the UK & allow border control to deal with them when they get here?

James Heappey – Priti Patel had to weigh tbat up against risk…

Charlie Stayt – This is bogus, that women & children are a risk to our security.. #BBCBreakfast pic.twitter.com/Qbw7jCOpIi

Leading the effort against Russia

On Monday evening, a special hour-long edition of BBC Question Time was dedicated to the Ukrainian war. Following the government line, Education Secretary Nadam Zahawi suggested the UK was leading the efforts and that Russia regarded Prime Minister Boris Johnson, as a leader in this field.

That put him and the Tories in their place. It’s about time someone said it. Well done @HelleThorning_S Bloody brilliant. #bbcqt pic.twitter.com/W1tq9WlIwb

His comments drew derision, both on the programme – most notably from the former Danish prime minister, Helle Thorning-Schmidt – and later on social media. Thorning-Schmidt said that Zahawi almost made her “chuckle” with his ridiculous claims, and that the European Union is “leading the effort against Russia”. Regarding his claim about Johnson, she suggested Russia would not see our prime minister as a leader and Zahawi should set the record straight.

Turned on #bbcqt special to see @HelleThorning_S calling out @nadhimzahawi's nonsense that UK can't waive refugee visas (unlike rest of Europe) because Putin sees UK as most dangerous enemy.

She correctly points out that Putin will be more concerned about EU.

According to the United Nations, over two million refugees have already fled Ukraine. Only 760 of those desperate people have been granted UK visas to date. As the fighting continues, the number of people expected to be displaced could exceed four million, with 18 million people projected to be affected.

EU countries, albeit geographically closer to Ukraine, have taken tens, even hundreds of thousands of refugees. In Poland’s case, it’s over 1.4 million. Even Ireland, with its relatively small population (just over five million), has taken in over 2,500 refugees – a third of them children.

Across the EU, refugees are being welcomed with open arms, being offered sustenance, free travel, accommodation and support. They are welcome to stay for three years, and without the need to apply for visas or jump cumbersome bureaucratic hurdles.

Many refugees are only seeking a temporary solution to the crisis and will want to return to their homeland at the earliest opportunity. But regardless of whether they wish to stay temporarily or permanently, they deserve our help and support.

The government response – hostile, and deliberately so – does not, however, represent public opinion. The generosity shown by the British people when the government launched its Ukraine Humanitarian Appeal demonstrates a sincere wish to offer help. The public are showing a level of compassion and humanity the Home Office would do well to emulate. In denying Ukrainian refugees the support they so desperately need and deserve, the government is also denying the public the opportunity to do whatever they can to help.

In an earlier article, I referred to the government’s handling of the Ukrainian refugee crisis as “world-beating indifference”. But it’s worse than that. In Yvette Cooper’s words, it’s a “total disgrace”. We can do better than this. And we should.