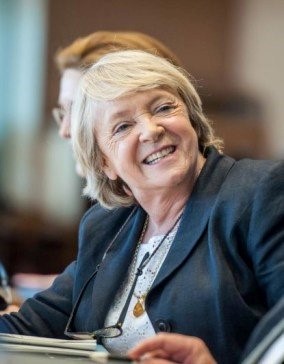 Born in Belfast, and a teenager during the “troubles”, Jane Morrice built a career on peace building, journalism, Europe and equality. A founder member of the NI Women’s Coalition, she authored the line on integrated education in the Good Friday Agreement. She was elected to the first NI Assembly in 1998 and became Deputy Speaker in 2000. She was EC representative to NI during the ceasefires and, as a member of the Delors Task Force, set up the first EU PEACE Programme.

Previously a BBC Belfast reporter, she also served as Deputy Chief NI Equality Commissioner. She represented NI on the Brussels-based Civic Forum (EESC) and as Vice President in 2013. In 2021, she was awarded an Honorary Doctorate by Hillary Clinton, Vice Chancellor of Queens University Belfast.

She currently serves as Director of the Integrated Education Fund, Member of the Brussels branch of Women in International Security (WIIS), Co-Chair of the Museum of the Troubles and Honorary President of the European Movement NI. Jane is now campaigning to have Northern Ireland granted Honorary EU Association as a European Place of Global peace-building.

John Moffett: It’s been said that most mainland Britons learnt more about the GFA in the last episode of Derry Girls! As someone closely involved with the creation of the GFA, could you briefly explain the incredible transformation because of the agreement on NI society, culture and business, and how Brexit tore so much of that apart?

The Good Friday Agreement was designed to bring an end to political violence in Northern Ireland. In the years following the GFA implementation in 1998, NI has experienced relative peace but reconciliation between the two main communities is still a long way off. By marking the beginning of the end of 30 years of violent conflict, the GFA was a truly ‘titanic’ achievement, but few could have predicted the iceberg that was Brexit looming on the horizon. In true British tradition, unionists were reluctant Europeans, while nationalists mainly supported the EU. The positive effect of UK and Irish EU membership helped blur the dividing lines between the two communities. The ‘four’ freedoms meant people and trade flowed freely, political leaders met frequently in Brussels and the EU PEACE Programme supported cross-community and cross border initiatives and helped pave the way for the GFA. By permitting NI citizens to be British, Irish or both, the GFA provided an ingenious solution to the identity question that has bedevilled NI since its inception. Brexit has driven a wedge between the two communities, which ‘Derry Girls’, using humour, has helped expose to a much wider audience.

David Eldridge: Once the EU referendum result emerged, there were many prophesies about an independent Scotland and United Ireland. Do you foresee a border poll in NI and, if so, what might be the result?

It is my conviction that Scotland holds the key to the future constitutional position of both the UK and Ireland. Those supporting Irish unification would be wise to await the result of a second Scottish independence referendum, proposed for 2023, before embarking on a detailed plan for a border poll. If Scotland votes for independence, heralding the break-up of the UK, the unionist position in Northern Ireland will become more tenuous. Scotland’s links with Northern Ireland are not only based on geography and history but also the strength of the cultural connection. Given the Ulster-Scot’s heritage, NI people, particularly unionists, feel closer links with Scotland than England or Wales. Scottish independence may pave the way for a rethink of the Irish question and could eventually bring both UK nations which voted Remain back into the EU fold.

Sue Scarrott: The NI Protocol was designed to avoid a hard border in Ireland and is clearly helping NI business to weather the Brexit economic storm better than the rest of the UK, bar London, yet the Tories are politicising it to pick a fight with the EU. How do you see that playing out over the coming months/years?

The NI Protocol is generally supported by nationalists but rejected by those unionists who claim it separates NI from GB by placing a border in the Irish Sea and serves to dilute their British identity. My proposal is to extend the Protocol to Scotland. This could offer several solutions. First it would take the political toxicity out of the NI debate by moving the border from the Irish Sea to the Scottish/English border. In Scotland, for those supporting independence, it could be seen as a ‘waiting room’ for EU membership. For those not in support of independence, it could offer the best of both worlds in the UK and in the EU Single Market. For London, it could be a compromise to keep Scotland as part of the UK. ‘Brussels’, however, may not support such a proposal. Given the ‘special’ circumstances regarding the peace process, the Protocol was intended to avoid a hard border in Ireland and accommodate the many thousands of European citizens in NI whose rights are EU protected. Extending it to Scotland may help resolve the unionist question but could set a precedent for regions in Spain, France or elsewhere demanding similar arrangements. 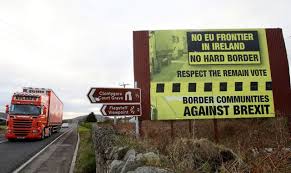 Val Chaplin: The easiest and best solution to the NI Protocol would be for the whole of the UK to rejoin the SM and CU. Do you ever envisage that happening and given the importance of unity and cooperation in Europe in light of the war in Ukraine, do you ever foresee the UK rejoining the EU?

There is little doubt that the economic benefits of the NI Protocol have exposed the harmful effects of Brexit on the rest of the UK. The powerful images of lorries lined up at Channel ports in Southern England are just the start of stormy waters ahead. Proposing to rejoin the SM and CU may help business overcome these immediate problems but the EU is much more than a marketplace. It is a meeting of minds, young and old, through programmes such as ERASMUS and Horizon in which information is shared, experiences exchanged and respect for others is encouraged. The only solution is for the UK to rejoin the EU. As I have often said: Brexit is not a divorce, it is a trial separation, allowing both sides to settle their differences and eventually get back together for the sake of the children.

Lisa Burton: Less than 10% of students in Northern Ireland attend an integrated school as opposed to a Catholic or Protestant school. Considering the first integrated school was established 40 years ago now, in your view, what is holding integration back?

As a Director of the Integrated Education Fund and author of the line in the Good Friday Agreement proposing a ‘culture of tolerance’ by ‘encouraging and facilitating integrated education’, I am convinced that Protestant and Catholic children studying together will help break down barriers between the two communities. Since the first integrated school was set up forty years ago, the movement has been campaigning to little avail. This is basically because of the strength of the lobby from both the Catholic Church and the State Grammar Schools, mainly Protestant, seeking to protect their ethos. Even attempts by the cross-community Alliance Party to have one single mixed teacher training college did not succeed. Things are changing, however, with the recent Assembly motion to provide greater support for integrated schools. This is likely to lead to an increase in schools transforming to integrated status and a greater understanding and respect among children, parents and teachers for the history, culture, identity and political aspiration of people from British, Irish and other communities in Northern Ireland.

Michael Soffe : Do you believe you will see a “united” Ireland as a member of the EU in your lifetime?

It has been said that peace can take as long to achieve as conflict takes to end. If that is the case, our 30-year conflict can only be matched by 30 years of peace. That would bring us to the 30th anniversary of the GFA in April 2028. This, I believe, would be an appropriate moment to begin the serious process of rethinking the constitutional position of Northern Ireland. Consultation should begin well in advance and include citizens, North and South of the border. The best forum for such consultation is that which was proposed by my party, the NI Women’s Coalition, in the GFA for the creation of a Civic Forum to support the legislative process of the NI Assembly. Similar to the Brussels-based European Economic and Social Committee (EESC) of which I was a NI Member for 15 years, this Forum would gather experts from business, trade unions and others to give advice to the legislators. Ireland has had very successful consultations leading to historic changes to important legislation, but it is my firm belief that the only way to get unionist participation in these consultations is that they take place within the NI Civic Forum.

To conclude, in spite of the horror I witnessed growing up during the troubles, I have always had a genuine love for Northern Ireland. I see it as a very special place which has a great deal to teach the world about the need for tolerance, respect and how peace can be achieved against the odds.

As a European unionist, I would therefore like to see Scotland, Ireland and Northern Ireland becoming the Northern BENELUX of the EU. In response to the question (will I see a United Ireland in my lifetime?) – I am no spring chicken, so I believe not. 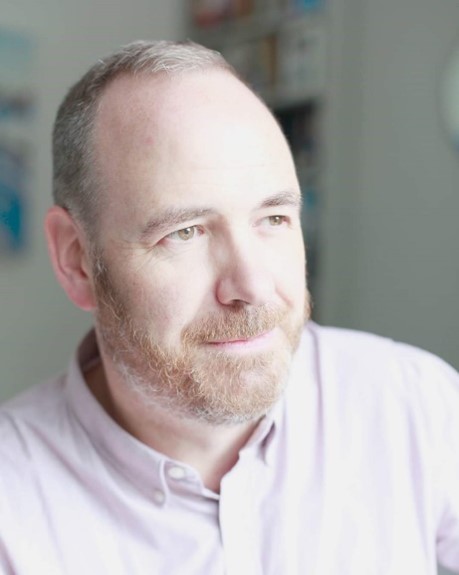 In our August newsletter, Bremainers Ask will be featuring Otto English, a.k.a. journalist and author Andrew Scott. He is a regular writer for Byline Times and Politico, and is the author of “Fake History: Ten Great Lies and How They Shaped the World”. If you would like to submit a question for Otto for consideration, please email enquiries@bremaininspain.com no later than Tuesday 9 August.