Bremain in Spain marches against Brexit in Manchester 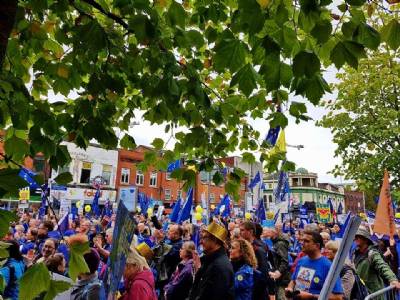 WHILST Catalunya descended into chaos yesterday (Sunday), a protest march against another referendum was taking place over 1,500 kilometres away: tens of thousands hit the streets of Manchester in a huge ‘Stop Brexit’ march.
Among them were members of the campaign group Bremain in Spain, which represents the interests of Brits living in Spain or with holiday homes there who are concerned as to how far their lives will be affected by the UK’s decision to leave the European Union.
The 5,000 – and steadily increasing in number – members of Bremain in Spain were not all able to go, but the small number who did were represented by indefatigable group leader Sue Wilson, whose realistic and straight-to-the-point speech attracted whoops and cheers from the 50,000-plus who joined the march to the Conservative party conference being held in the north-western UK city.
The demonstration kicked off with Lib Dem leader and passionate anti-Brexit campaigner Vince Cable, philosopher AC Grayling and The New European‘s editor-in-chief Alastair Campbell giving their views.

Vince Cable: “The first thing Mrs May should do is protect citizens’ rights”

Sir Cable said he ‘hoped the Tories down the road’ were ‘listening’ to the crowd’s ‘very clear message’: “They are not all leavers; far from it. There are plenty of Tory activists who are very unhappy with the way things are going. I hope Labour are listening, as well – a lot of people forget about Jeremy Corbyn’s anti-EU stance.”
Sir Cable said there were many ‘specific things’ the UK government could be doing at the present time, the main issue to resolve being that of citizens’ rights, both Europeans in Britain and Brits in Europe. “Currently they are scared and many are leaving,” Vince, pictured here with Bremain in Spain’s Sue Wilson, revealed.
“If Theresa May is so confident she is going to get a good deal, why does she not put it to the public?” The Lib Dem leader wondered.
AC Grayling pointed out that those who oppose Brexit are ‘much more than 48%’ of adult British citizens, something Bremain in Spain’s Sue Wilson stressed in her speech, referring to those UK nationals living in the EU who were not allowed to vote in the referendum due to having been residing abroad for 15 years or more. Her punchily-delivered discourse came at the end of the march, after the 50,000 paraded down the streets of Manchester chanting en masse, ‘b******s to Brexit’.

“Nobody should have their rights removed against their wishes”

Get full transcript of speech in thinkspain article