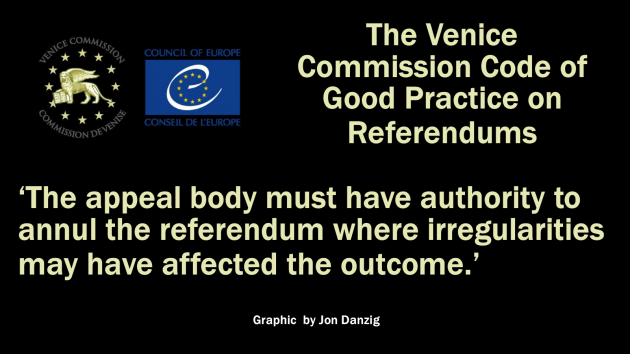 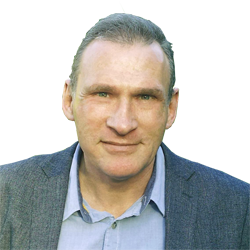 In all democracies, it’s essential that elections – including referendums – are run fairly, and that the regulatory authority has the power to annul an election or referendum if serious irregularities may have affected the result.

That’s not just my opinion. Such a requirement forms part of the Venice Commission’s ‘Code of Good Practice on Referendums’.  Although the code is voluntary and not legally binding, the UK is one of the 61 member states of the Commission and helped to form the Code, which was adopted in 2006. The Commission advised me:

“The Code was and is strongly supported by the Committee of Ministers recommending to the member States to respect its provisions.”

‘The appeal body must have authority to annul the referendum where irregularities may have affected the outcome. It must be possible to annul the entire referendum or merely the results for one polling station or constituency. In the event of annulment of the global result, a new referendum must be called.’

In the UK, our Electoral Commission is the independent regulatory body for elections and referendums, set up by Parliament to “regulate political finance in the UK” and to “promote public confidence in the democratic process and ensure its integrity.”
I asked the Commission if they have the power to annul a referendum, in accordance with the recommendations of the Venice Code.
They replied:

“In short, no we do not have the power to annul an election or referendum.”

If the Electoral Commission had the power to annul a referendum in accordance with the Venice Code, then it’s unlikely that members of the public would now be calling on the High Court to declare the EU referendum “void” as a result of serious irregularities.
The case of Susan Wilson & Others versus The Prime Minister, is scheduled to move to a full hearing on 7 December.
The case will argue that Brexit must be declared void and the notification of Article 50 quashed because, “various criminal offences may have been committed”.
Read the full Jon Danzig’s article in his blog…