Braving the Weather for Bremain! 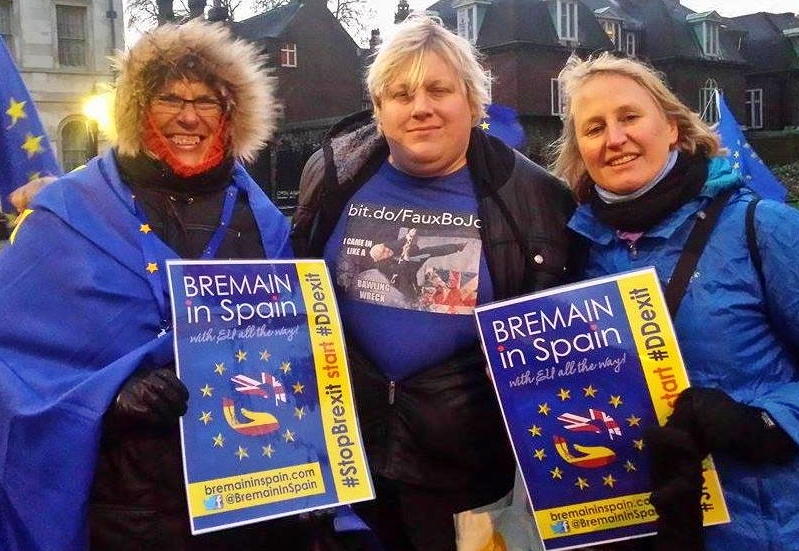 I’ve just got back from another whistle-stop visit to London on Bremain in Spain business, despite the worst weather in the UK for years.

The first of my meetings, on 7th December was with Best for Britain, at their offices in Covent Garden. They are working on a number of anti-Brexit campaigns including a lobbying campaign regarding Amendment 7, which would give MPs a final, meaningful say on the Brexit deal. 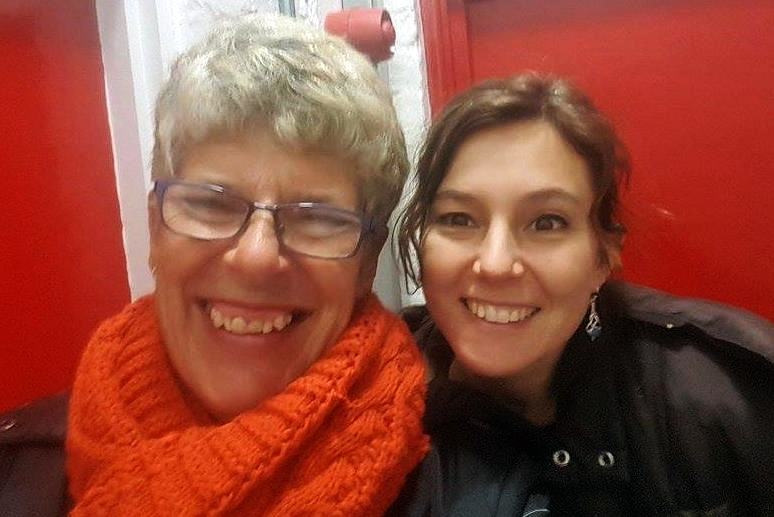 Their latest project is the release of their own Brexit assessment reports. These reports summarise outcomes by sector, and are being issued to all MPs as we speak – they will be developed and added to over time. Another excellent ongoing project is their training programme workshops. They are running these training sessions all over the country – the objective being to teach people how to converse with, and hopefully convert Leavers. It is an ambitious campaign aimed at reaching all parts of the UK, within 75 miles of each and every constituent – giving remainers the skills and the confidence to help change public opinion. The next session, which will be filmed, will take place in Vauxhall in the constituency of Leaver Kate Hoey. We’re hoping to persuade them to extend their road trip to include Spain! It is a pleasure to work with such a passionate, well organised and focussed organisation, and if you’re not already a member, I recommend that you subscribe – https://bestforbritain.org/ 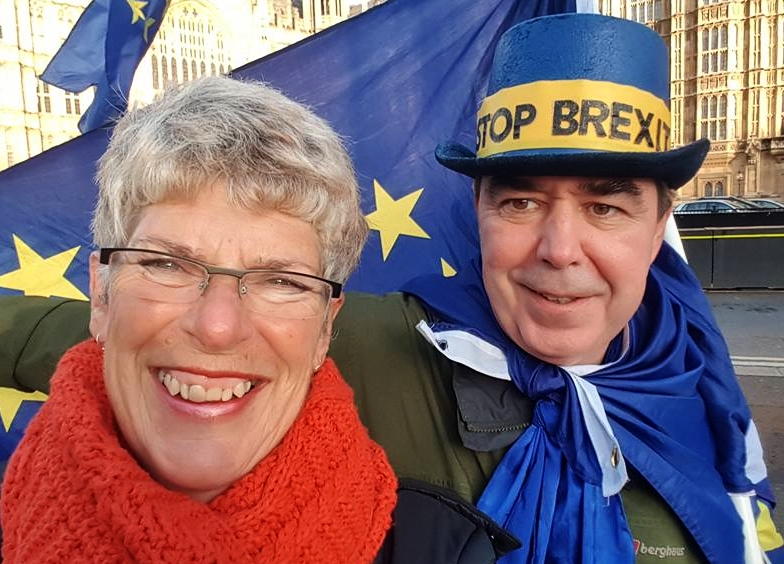 Outside the Houses of Parliament later, I met up with Steven Bray of SODEM. Steven stands outside Parliament, all day, every day, with a small group of fellow campaigners, wearing his Stop Brexit hat and waving his EU flag. No matter the weather, he is there campaigning, and has become well known amongst MPs and Peers, many of whom often walk over the road to speak to him directly and to tell him to keep up the pressure.

One of his fellow campaigners holds up a sign saying “Toot if you want to Stop Brexit”, and it was very encouraging to hear so many lorry, taxi, bus and car drivers responding. Just standing around for a few minutes in the cold with him really brought home to me the commitment Steven shows in his unique and very special protest.

It was great to see him make the Channel 4 news last week when he was clearly seen and heard. What an amazing character!

Later that day, I visited the House of Lords for a meeting with Libdems Tom Brake MP (Shadow Brexit Minister) and Baroness Sally Hamwee (House of Lords Human Rights Committee). I had met with them both before when I attended a Libdem Round-table meeting on citizens’ rights with the 3Million. They had said last time that they were open to further meetings, and not to wait to be invited, so I took them at their word and asked for a one-to-one meeting. It was great to be able to talk exclusively about issues relating to Brits in Europe this time around, and about our continuing fight against Brexit. Our meeting took place in a House of Lords tea room, complete with waiter service, individual tea pots, and a delicious warm scone with clotted cream and jam!

Our conversation covered citizens’ rights issues, especially those that have not as yet been agreed in the negotiations. We talked about the likelihood of the talks moving on to phase 2 and whether or not the EU would agree that sufficient progress had been made. Little did we know that we were going to be proved wrong in the next 24 hours. We also discussed the importance of ring-fencing any agreements, and the lack of progress with regard to Votes for Life legislation. 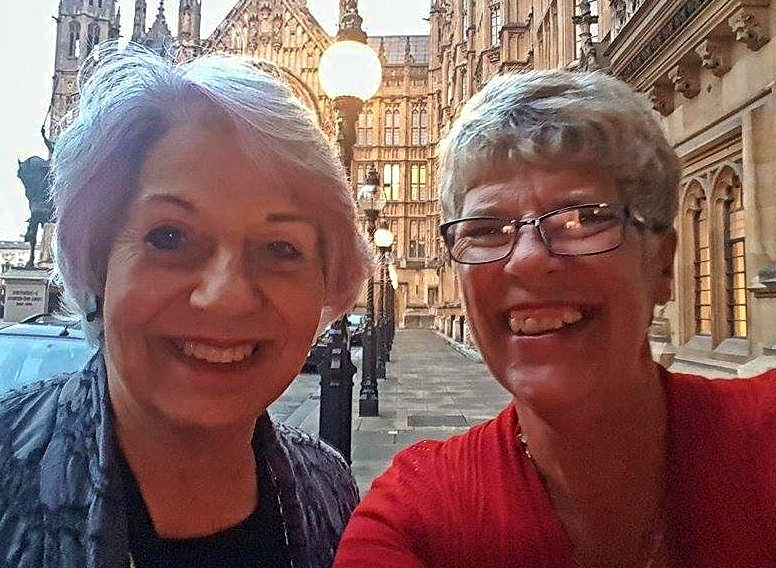 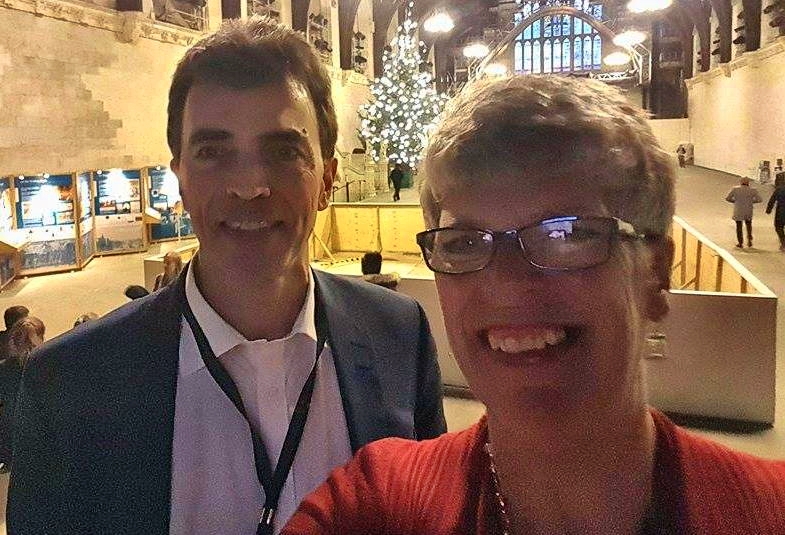 Baroness Hamwee provided some very useful information with regard to the expected timescales for the passage of the Brexit Bill through the committee stage in the House of Commons, and then the anticipated progress through the House of Lords. She expects that the Bill will be with the House of Lords until after the Easter recess, in April. No doubt the Lords will have a number of amendments of their own before returning the bill to the “other place” for the “ping-pong” stage.

The Libdems are still absolutely in favour of a referendum being offered to the public on the Brexit deal, & to pointing out at every opportunity the nonsense that is Brexit. I will be keeping in regular touch with them both, and with their colleague Sir Ed Davey, who unfortunately was unable to join us on this occasion. I shall be looking forward to another meeting, and another scone! 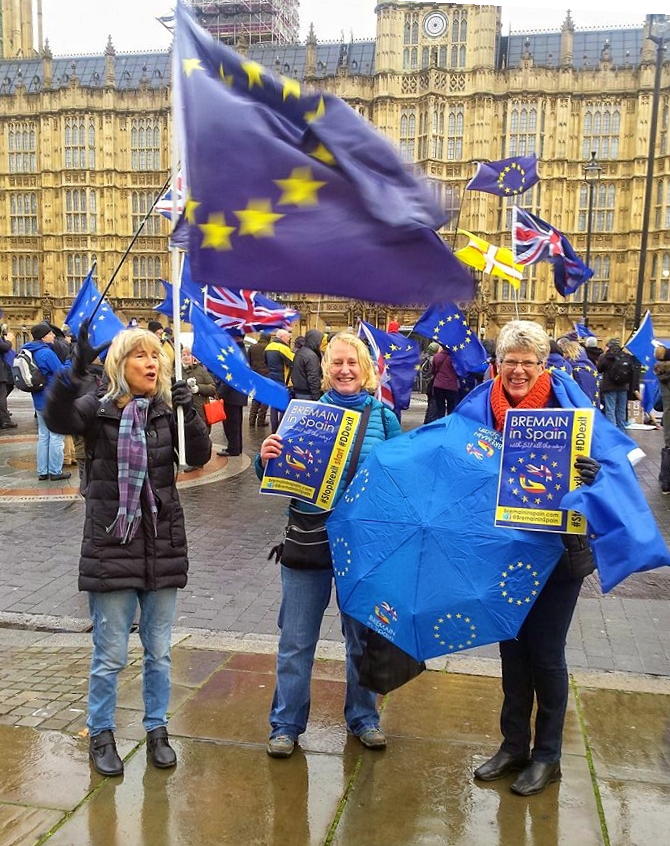 My next visit to London was on Monday 11th December. It was touch and go as to whether the weather was going to prevent my trip, but thankfully I made it. Fellow Bremain member Elspeth Williams joined me outside Parliament, having travelled from Spain via Wales! There we joined some very cold and committed protesters for the Rally regarding a petition on an exit deal referendum. Unfortunately, due to severe weather conditions, many were unable to make it to London on the day, including the rally organisers, but those that did attend certainly made their voices (and horns and whistles!) heard. There was a lot of support from passers by, and a number of Lords came out to thank us for our efforts. Judging by the number of photos in the press the next day, accompanying Brexit news stories, there were a few journalists around too. 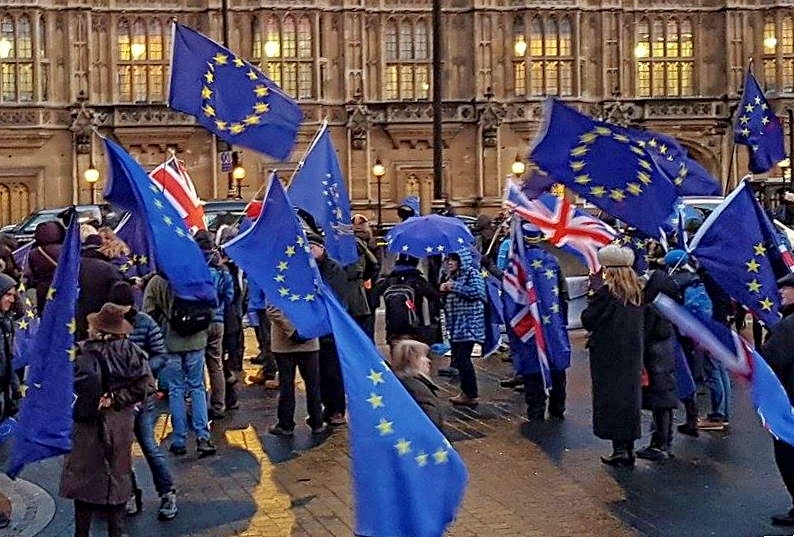 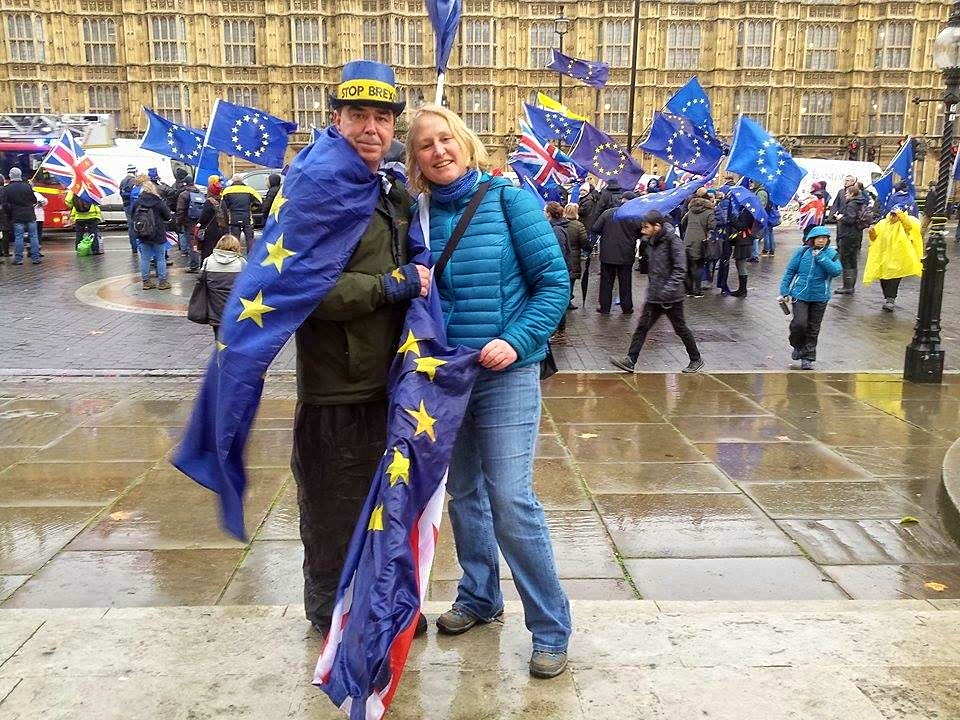 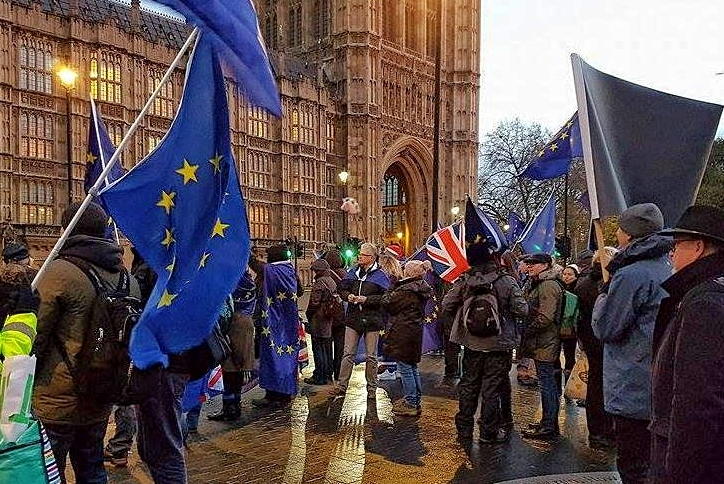 After 3 hours in the cold, & in need of thawing out, Elspeth and I headed off for a hot drink. By this time, the debate taking place in Westminster hall regarding the referendum had started. The debate was the focus for the rally in the first place, so we decided to see if there were any seats left in the public gallery of Westminster Hall. Luckily there were, so we were able to warm up inside whilst watching a fascinating debate for the next 2 and 1/2 hours. 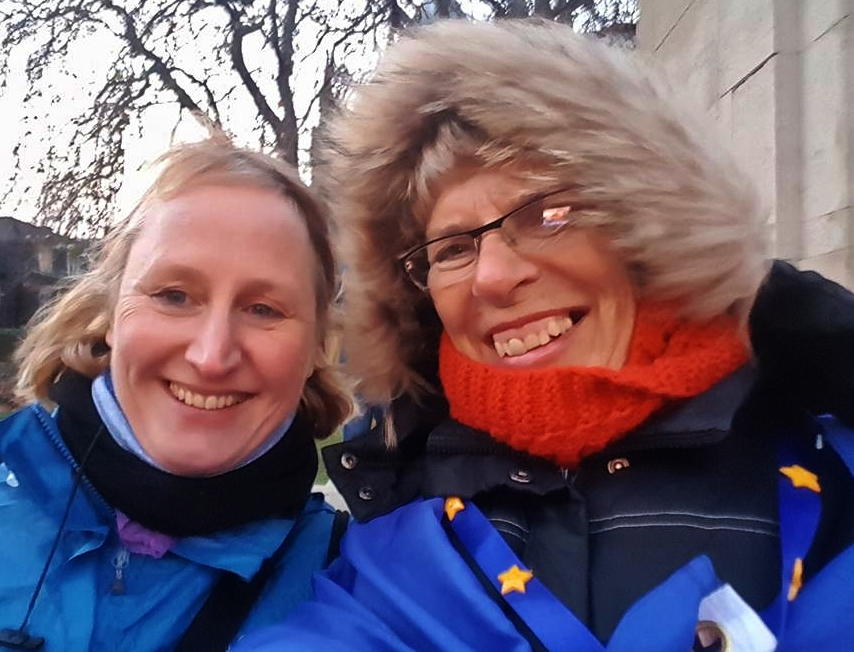 We witnessed some great speeches, especially from Caroline Lucas (Greens), Geraint Davies (Labour) & Tom Brake (Libdems). The Tories, unsurprisingly, were not in favour of the pubic having any further say in the Brexit proceedings. It was also very pleasing to be able to hear the protesters outside with their chants of “Stop Brexit” and “Bollocks to Brexit”. Whilst we weren’t allowed to take any photos, we were able to tweet throughout the debate. However, it was impossible to keep up with the constant tweeting by Tom Holder, Libdem campaigner – the original petitioner in this case, who was sat in front of us & we’d met earlier at the rally. 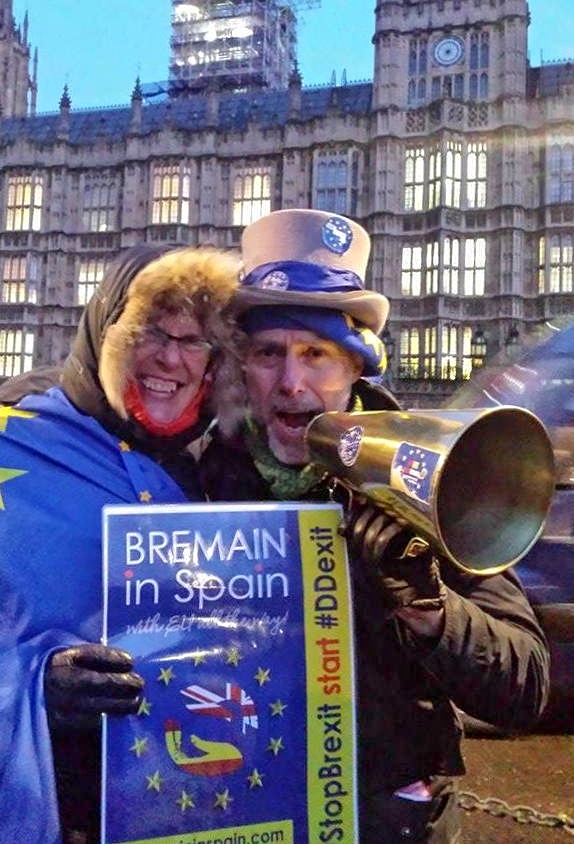 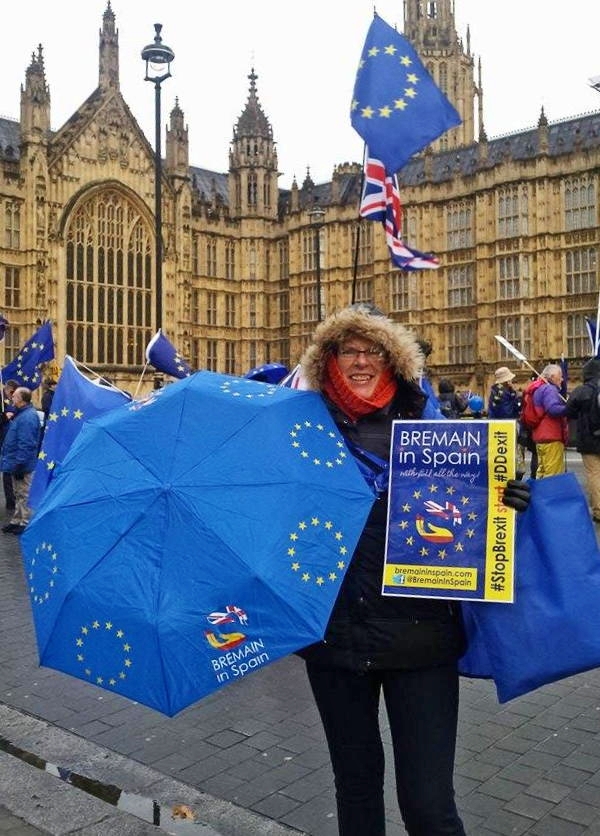 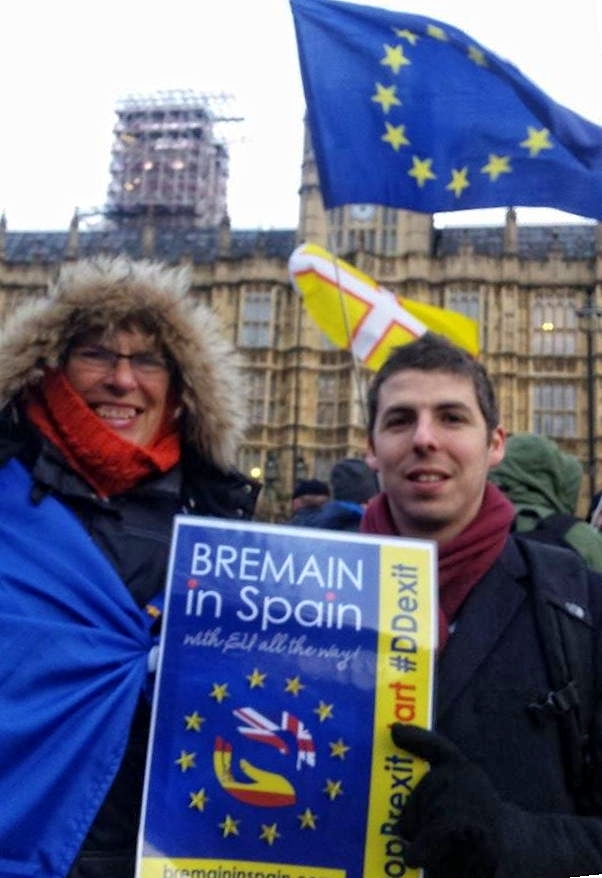 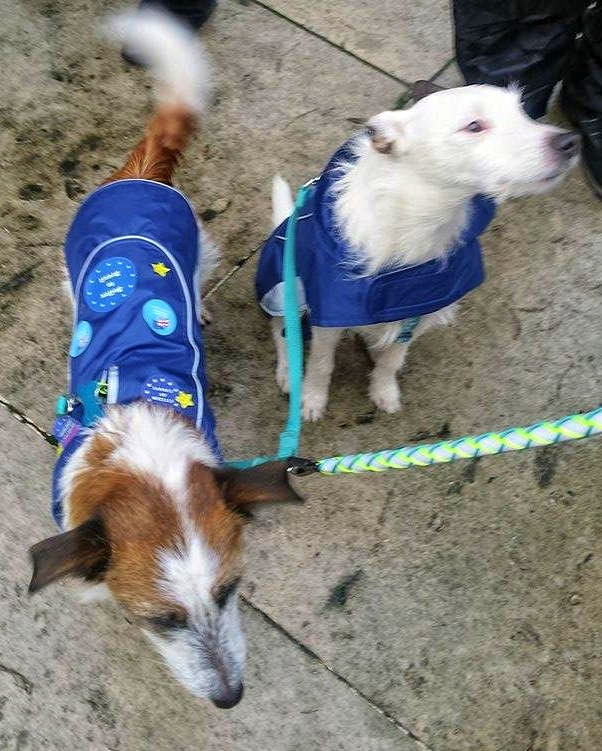 Afterwards we had the great pleasure of shaking the hands of Geraint Davies and Caroline Lucas, and having long chats with MPs Susan Jones (Labour) & Peter Grant (SNP). Tom Brake could not stop to chat but I was pleased that he said “Hello Sue” as he walked past, as I was talking to Caroline Lucas. I had met Peter Grant before, as he is on the House of Commons EU Select Committee, which I presented to back in January. I remember him being very generous with his time back then, as he was again after the debate today – he had some interesting anecdotes about the Select Committee’s recent trip to the Irish border (which they had trouble locating!), and about the recent appearance of Davis Davis in front of the committee. 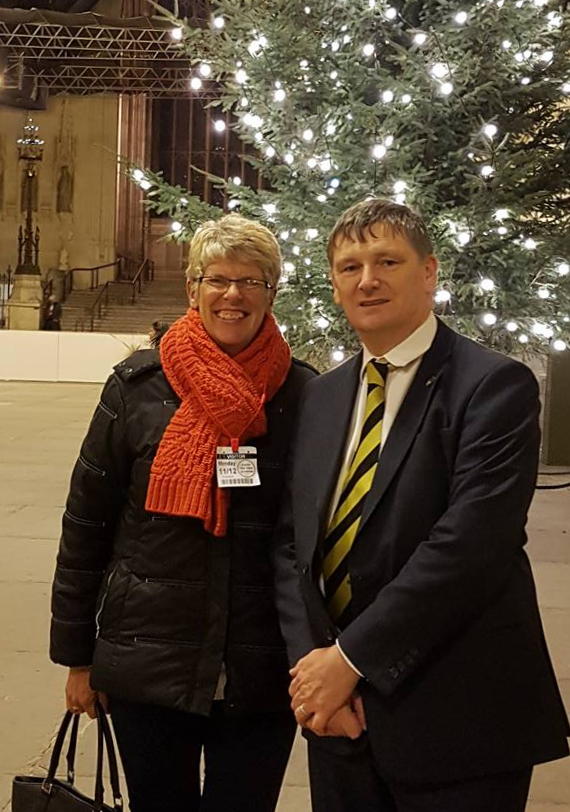 We asked Susan Jones, who had been responsible for opening & closing the debate what the next steps were. She said that they do not vote on the subject, only debate. However, she stressed that this was just the first of what would be many debates on the subject in coming months – more importantly, any further debates would take place in the House of Commons, so we’ll be watching out for those. This subject is clearly far from closed. If nothing else, the debate was a useful indication of where some MPs stand, who is passionate on the topic, and what the arguments are on both sides.

Following the debate, I started my journey back home to Spain. The tube and a train delivered me to Stansted, 10 hours before my flight at 7.00 the following morning. I had returned my hire car a day early before heading to London, so that I would not have to drive overnight in what was expected to be the coldest night yet (-10 degrees centigrade). After an uncomfortable night, hours of which was spent on a cold floor, next to what seemed to be 1 of only 2 electric sockets in the entire airport, I took off in the morning only 15 mins late and with a full charged mobile! Remind me next time I make plans to visit London not to go in the winter! Thankfully now back in Spain enjoying the sunshine, and reinvigorated for the fight!