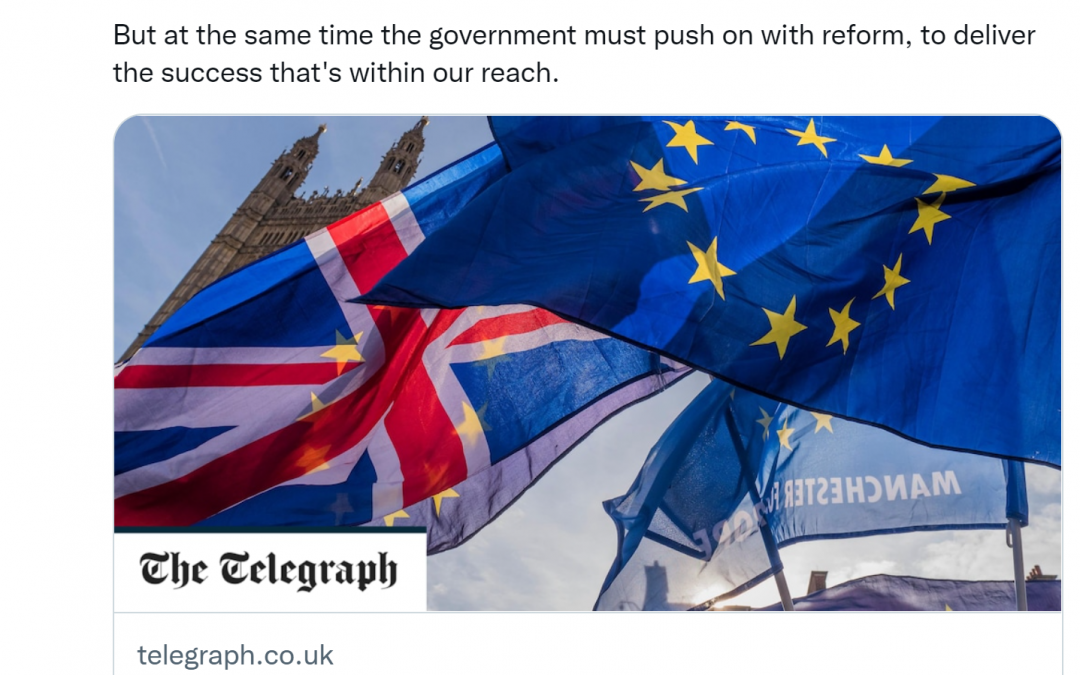 As we’re old friends now, I’m sure you’ll forgive the informality of my address. I thought you would rather prefer David to ‘Frosty’, with or without the ‘no-man’ handle.

Of course, as your latest ‘article’ – for want of a better description – was published in The Telegraph, I’m sure your incoherent and incomprehensible musings were received with open arms. After all, any newspaper that employed your former boss as a regular ‘journalist’ clearly has some judgement issues.

So, about your latest comments. Firstly, I’m sure it’ll be no surprise to you that I am an ultra-Remainer, and yes, I am mobilising. There are millions like me, and we have a democracy to save. Your suggestion that we “became a full democracy once again” thanks to Brexit just proves your complete misunderstanding of, well, everything.

If memory serves, you were once a Remainer too. Even when you couldn’t make up your mind which side you were on (who does that remind me of?), you were in favour of single market and customs union membership. You said that, for the sake of global trade, “it simply isn’t worth jeopardising access”. Even in this latest article you state that “no sensible person would deny that leaving the single market and customs union has some effect on trade in the short run”. I guess we would probably argue over how long “the short run” equates to. I think your fellow Brexiteer, Jacob Rees-Mogg might have mentioned fifty years or so. Seems quite a long run to me. 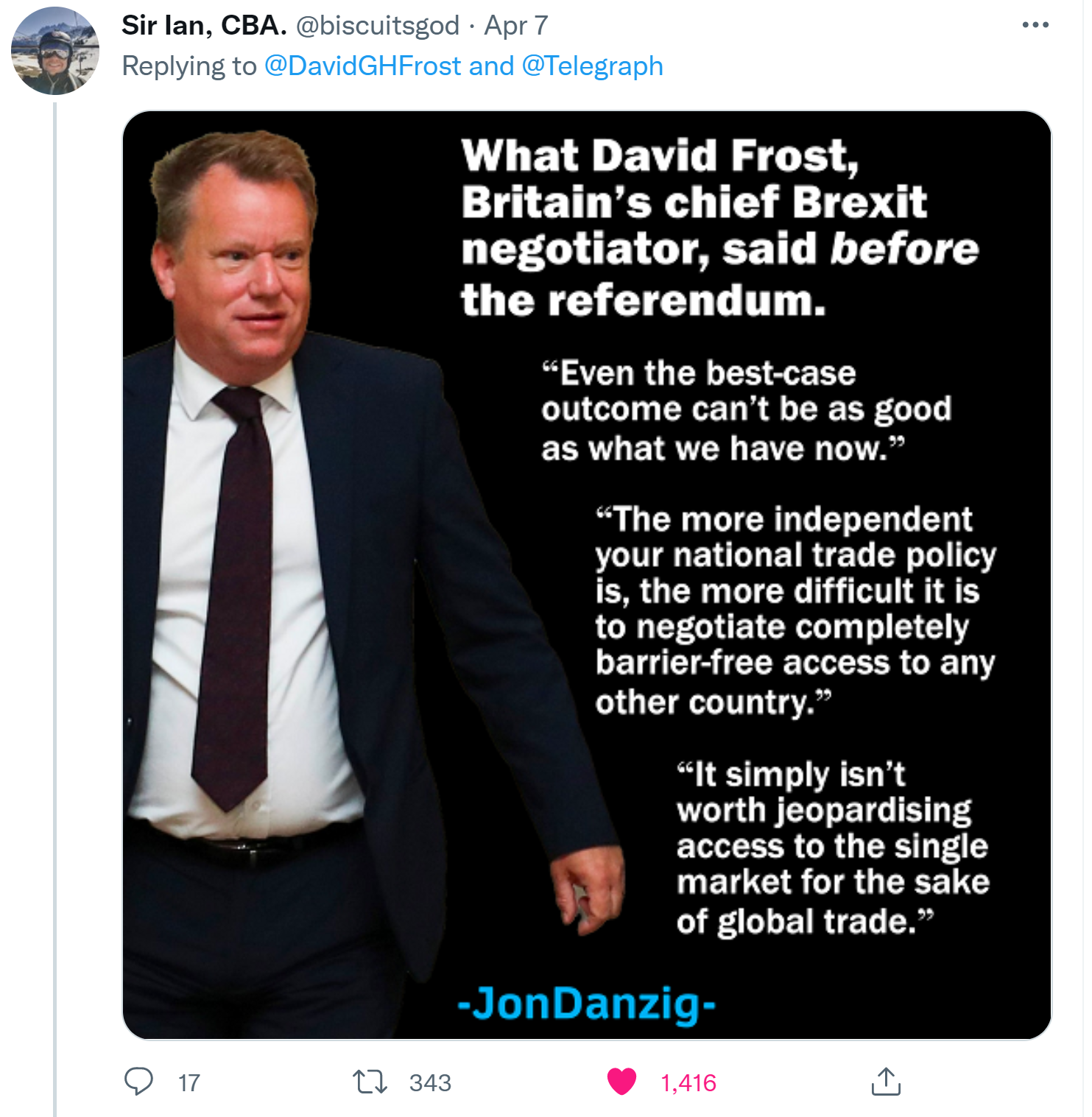 Despite having advocated your “grand new free trade agreement”, and boasted about securing the deal in just 10 months, the gilt on the deal wore off quickly. How long was it, exactly, before you and Johnson started rubbishing your own deal and demanding the EU make changes? When the EU failed to respond to your posturing, bullying nonsense, you threw in the towel and left the job to another incompetent Brexit convert. Never gave up the title, though, did you? Bet you’re giving that a lot of thought now that you’re eyeing up No. 10.

You complain in your piece about European Movement Chair, Lord Adonis, saying that “Brexit has failed. We were lied to. It’s time to rethink”. But that’s all you do – you don’t say what’s wrong with those comments, or even contest their veracity. Perhaps that’s wise, though no surprise. Disputing the truth has never been something that Brexiteers have shied away from. Quite the opposite.

To be fair, your disconnection from reality is not limited to Brexit. It applies equally to “living with Covid successfully”, and a variety of “world-leading” claims. Have you seen the Covid figures recently? Hundreds of British people are ‘dying with Covid’ every single day. And as for the UK leading the world in anything at all, I’m struggling to think of a single example. Well, any positive examples.

Your article did make me smile though. My favourite paragraph was the one where you said, “it is impossible to draw any firm conclusions from the trade figures”, adding that “the picture is reassuring”! Have you seen the latest reports from the Office of Budget Responsibility? However, it wasn’t those comments that caused my smile – it was the start of the paragraph. It began, “in reality”. Worthy of any comedy club appearance, that one. 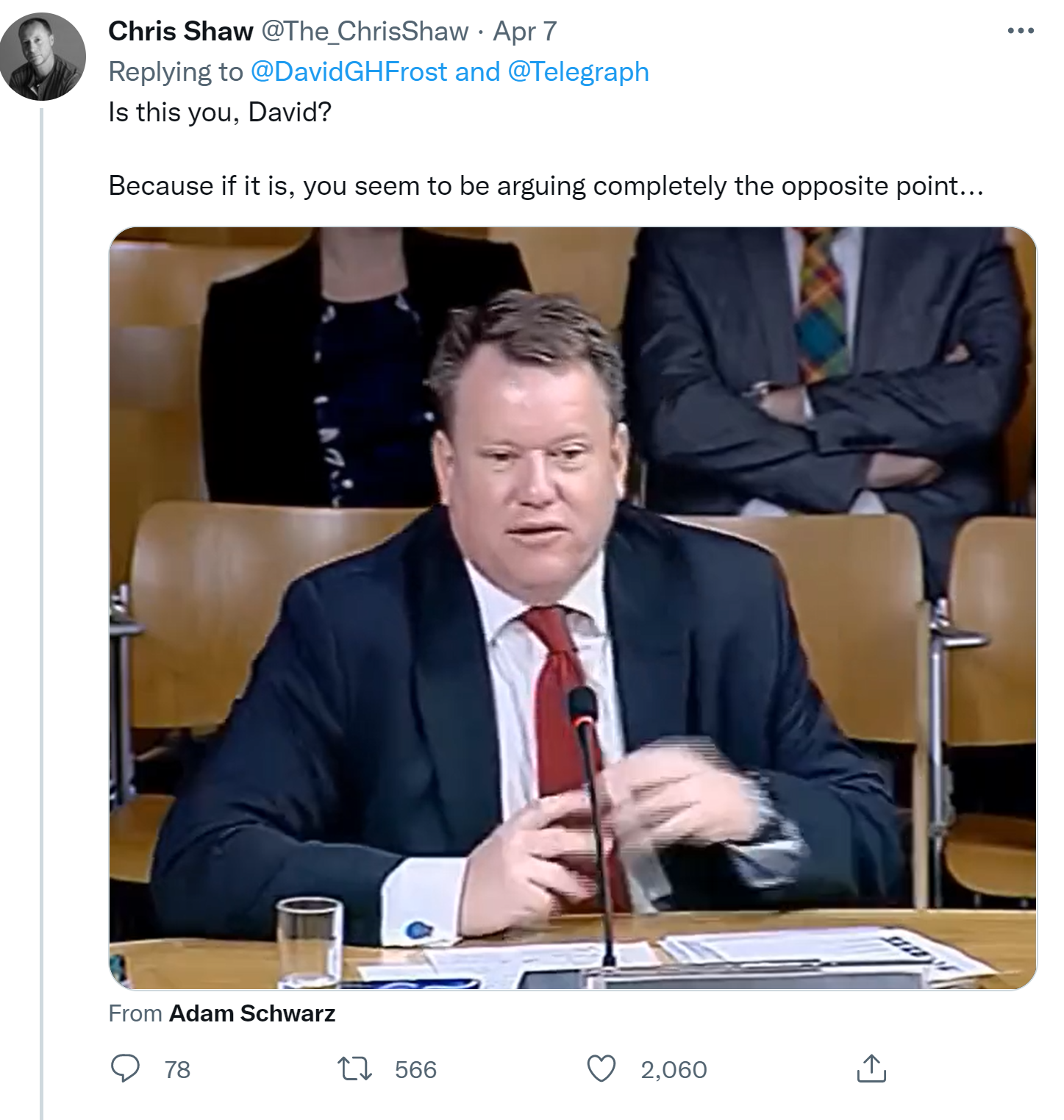 You claimed that “what matters is not trade, but economic growth”, so I guess you are not an advocate of doing trade with the EU, or the US for that matter. Though quite how the economy is expected to grow when we’ve few friends or trading partners is beyond me. Of course, I’m no economist, or member of the House of Lords, so what would I know?

Your final piece of Brexit-related nonsense was to suggest that the next referendum on EU membership should be held in 2067. After all, we had 47 years for the EU to demonstrate “that UK membership was a good idea” and Brexit should be measured by the same standard. If you’ll excuse me for pointing out the bleeding obvious, it didn’t take 47 years for the country to benefit from EU membership, or to take note. The benefits were obvious right from the start.

Do you remember when, back in the good old days of pre-EU membership, the UK was branded as the “sick man of Europe”? I’ve got news for you. Thanks to you, your ex-boss and your Brexiteer friends, that label is back. So, keep your irrational, asinine, and frankly, boring remarks to yourself. You resigned as Brexit Minister, remember. Nobody is listening now, if they ever were.