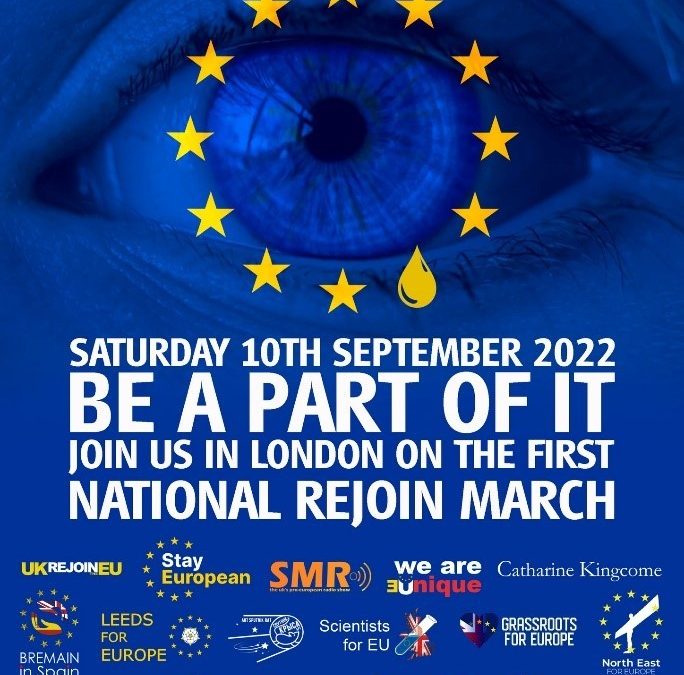 Lisa Burton, Bremain Vice Chair talks to some of those who are travelling from Spain to London this Saturday to join the National Rejoin March, writing for Yorkshire Bylines.

The first National Rejoin March will take place in London this Saturday, 10 September. It has the support of dozens of UK-based, pro-European groups who will travel from across the country to attend. But what motivates those coming from further afield? I spoke to some fellow British immigrants living in Spain and asked them why they were making the effort, at considerable personal expense, to attend an event that lasts just a few hours.

Sheila and her husband live in Fuerteventura in the Canary Islands and are retired. Her husband has health and mobility issues, yet, at considerable expense and disruption, will take the four-hour flight to London, arriving after midnight the night before the march and flying back the day after.

They have been living in Spain since 1993 and are well settled and legalised, with Brexit not causing any specific problems for them personally. So why make an effort at all?

Sheila spends time on forums helping people in crisis because of Brexit. Whether it be denied residency, advice on health, driving, families separated due to different immigration statuses or a friendly, supportive ear. She sees the stress and difficulties Brexit has wrought on many people’s lives. People have had to leave and sell their homes. Lives shattered.

Sheila’s son has lived in France for 15 years. She fears they may need his support as she and her husband get older. Brexit makes that extremely difficult. UK nationals have rights in their host country but lost their freedom of movement and must adhere to the 90/180-day rule in the rest of the Schengen zone.

Sheila, like many UK nationals residing in the EU, did not have a vote in the Brexit referendum due to the 15-year limit. She wants to voice her opinion. “Brexit has caused so much damage to so many people.”

Hilary and her husband Stewart will be flying in from Valencia. They are both passionate pro-Europeans and have attended protests previously.

“I have felt a deep sense of commitment towards Europe from the day we joined in 1973. For 47 years, we enjoyed all the benefits of being part of a group of nations that always sought to improve the lives of its citizens. I never even dreamt that one day I would find myself on the outside looking in. I am deeply ashamed of what Brexit has done to our once-proud nation and shall continue to resist until the day we resume our rightful place at the heart of Europe.” 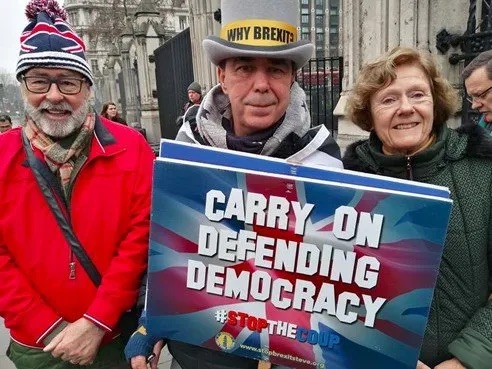 I came across Vanessa a couple of weeks ago as she reached out for help on a Facebook group. She has an elderly mother in Spain who has sadly had a stroke and needs care. Brexit has made it impossible for Vanessa to stay and take care of her mother. Her tenaciousness and attitude are admirable. She has tried every avenue to get help and her story heard, including contacting many Spanish authorities, the Foreign Commonwealth and Development Office, Sky News, the BBC and LBC radio, and is still looking for solutions.

Vanessa must leave Spain on 8 September and leave her mother for three months before returning, or she will be deemed illegally overstaying. I couldn’t practically help Vanessa, but I was able to tell her story, which you can read here in full.

“This will be the first protest march I have ever attended. Brexit has turned people’s lives upside down in a way few understand. My mother wants to remain in her home of 22 years, and I just want to take care of her.”

“Although on a personal level, I’ve recently rejoined the EU by becoming Spanish, I’m travelling to London for the march because I still care for my former compatriots (including close family) in the UK.”

David continues: “To those that say it’s too early to campaign to rejoin the EU (we’ve been dubbed ‘extremists’ in one tabloid). I know the UK isn’t going to rejoin soon, and rejoining will be a long process involving profound changes to British society and the political system. But we can start on that path immediately after the next election if the political will is there and embark on a step-by-step process. Erasmus, Horizon, an amended treaty encouraging UK-EU trade rather than inhibiting it, eventually leading to rejoining the single market and customs union, the restoration of reciprocal free movement rights until the time is right to take the next logical step and become full EU members again.”

Sue is chair of the citizens’ rights group Bremain in Spain and one of the guest speakers at the event. Before Brexit, Sue was not interested in politics but was devastated by the referendum result. She was the main plaintiff in a case that took Theresa May to court over the legality of the Brexit referendum. The government accepted the referendum broke electoral law and that had the result been legally binding, it would have been overturned. However, even though it was treated as binding by the government, it was, in fact, merely advisory; therefore, the court ruled that the result should stand.

“As British citizens abroad, we have always felt as though we were invisible to our own government. We’ve been treated like bargaining chips during negotiations and had rights we expected to hold for life stripped away from us. Brexit is an unmitigated disaster, and we’ll keep turning up in Westminster – even from Spain – until politicians of all persuasions get the message. It’s time to get Brexit undone and rejoin the EU.” 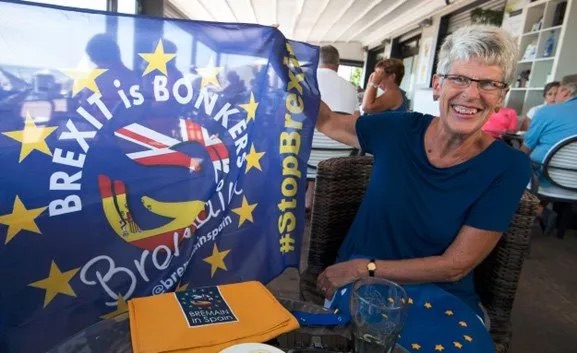 Let down by our government

What I note most strongly when speaking to UK migrants in Spain is the sense of feeling let down. Let down by a government that didn’t tell them or the country the truth about what Brexit would mean. Saddened that so many UK nationals don’t fully understand the far-reaching consequences of Brexit, what the loss of freedom of movement truly means and the difficulties it brings. After all, it was only the British that lost this right.

The Brexit referendum was six years ago and no one born this century voted for Brexit. Evidence abounds that Brexit is damaging the fabric of Britain, its investment potential, growth and the UK’s world standing. Almost half of all businesses have ceased trading with Europe due to costs and red tape.

While the Conservatives, Brexit-supporting media, and even the Labour Party may want to avoid the B word altogether, many say it is time for an open and honest conversation about the damage of Brexit and how it is exacerbating all the UK’s issues. And how the most simple solution to so many problems would be to rejoin the single market at the very minimum.

These people are no longer Remainers. They are Rejoiners, and they are not going away.