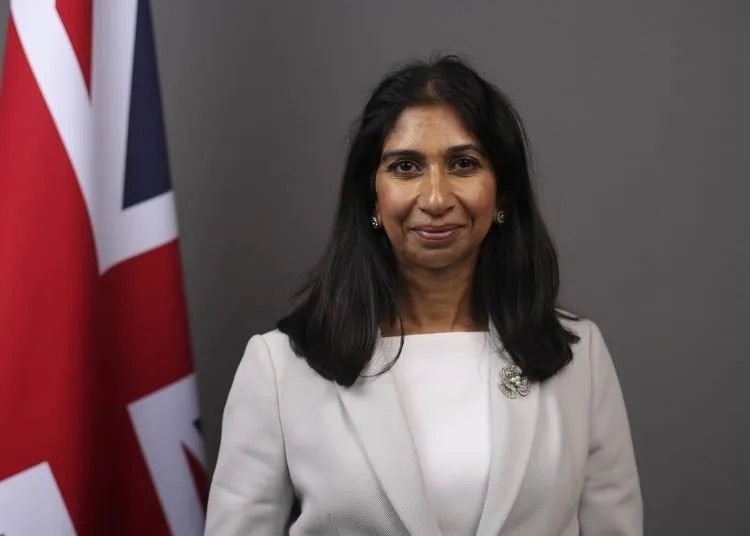 Ever since the Brexit referendum in 2016, the UK has become disturbingly familiar with anti-immigration rhetoric. Before the toxic language of UKIP/Brexit Party changed the nature of the conversation, the majority of the British public had no issue with European citizens doing jobs that they didn’t want. Six years on and staff shortages are a major issue, especially in industries such as hospitability or food. Thanks to Brexit.

Home Office – all talk and no action

Not only did Brexit change public attitudes towards migration, it shifted the Conservative Party ever further to the right. With that shift came increasingly alarming language from one home secretary after another.

First, we had Theresa May with her ‘go-home’ vans. Then we had Priti Patel with her disgusting policy – never yet implemented, thankfully – of sending desperate asylum seekers to Rwanda. Finally, just when we thought it couldn’t get any worse, along comes Suella Braverman, not once, but twice. With her far-right language of “stopping the invasion” and “the scourge of illegal immigration” it’s no wonder she earned the nickname Cruella.

I have been studying the far right for 30 years, this is the language of the far right. For all the international panic on Italy, we should sound the alarm bells on Britain a bit more. 🚨 pic.twitter.com/D3pWnZPD7w

If the rhetoric itself – from a government department responsible for the welfare of vulnerable asylum seekers – wasn’t bad enough, the lack of action is unconscionable. And deliberate, very deliberate.

Not only is Braverman’s cruel and toxic language offensive, but it is not supported by the facts. While it’s true that the number of desperate migrants crossing the British Channel has increased considerably – to over 40,000 this year alone – the numbers don’t tell the whole story. What they don’t explain is why.

They also fail to evaluate UK immigration against that of other European countries. That comparison shows the UK well down the European league table – in 19th place – when reviewing immigrant numbers as a percentage of the population. A fact that even the reticent BBC News programme is now sharing on prime-time TV.

At last !! 👏👏
First time I've seen on major UK news programme a reminder that the UK receives FAR FEWER asylum claims than most EU countries – it's NINETEENTH in Europe per population !!

Immigration: no solutions, only obstacles

Although migration from the EU has reduced, immigration from the rest of the world has not. In fact, it has increased. Desperate asylum seekers willing to risk life and limb for a chance of a better life have been left with no other options. Safe routes no longer exist – thanks to the Home Office – and earlier arrangements with the EU are now unavailable.

Aspects of the Common European Asylum System no longer apply to the UK, and the loss of the Dublin III Regulation in particular has removed the UK’s ability to return asylum seekers to other European countries. Leaving the EU has also meant that EU funding is no longer available for assistance with asylum and immigration initiatives.

Despite all the promises that Brexit would reduce immigration, it hasn’t. We have, it seems, failed to take back control of our borders. Immigration was, for the purposes of Brexit, a suitable topic to hang a culture war battle on, and still is.

The terms ‘refugee’ and ‘asylum seeker’ are rarely used by the government. Instead, they prefer labels that stir up hatred and division. They prefer pejorative terms such as ‘illegal immigrant’, when what they mean is ‘undocumented’ or ‘irregular’. But those terms wouldn’t rile up the far-right, or satisfy those far-right members of the government, such as the European Research Group (ERG), the home secretary included.

Refugees aren't invaders. In fact refugees are fleeing invasions and dirty wars. I sought protection in the UK just before the millennium. I am proud of what this country has given me. We just go about our lives like everyone else and contribute at all levels.

The Platform for International Cooperation on Undocumented Migrants (PICUM) believes that labelling human being as ‘illegals’ is an example of bias. Not only does it affect public perception, but it also impacts on policy. The term ‘illegal’ implies criminality, is discriminatory, and quite frankly, offensive.

A person cannot be illegal. Migration is not a crime.

Regardless of their own personal views on immigration, the Tories have used migrants for their own ends. They successfully persuaded enough of the nation that poor, desperate immigrants were the cause of the UK’s ills (along with the evil EU, of course). They directed public anger at those looking for a better life in Britain, and away from themselves. What worked in 2016, however, is not working now. But the government is seemingly so blinded by its own hatred that is has failed to notice the change in public opinion.

Brexit changed attitudes to immigration with far fewer people worrier about it than in 2016 – even as the number of immigrants coming to the UK has kept rising https://t.co/11qBSIDWNo pic.twitter.com/Zs2YztZp4b

Despite increased levels of immigration over the intervening period, the British public are now far more tolerant of immigrants. Before the referendum, levels of anxiety were rising in line with overseas arrivals. Those concerns seem now to have evaporated. Except in government circles.

Whether it is the toxicity of the rhetoric, the cruelty of government policies, or the distressing sight of asylum seekers being treated like animals, public opinion does not match government language or actions. The world is watching and the behaviour of the UK – especially towards citizens of other nations – is under a microscope. The view is not a pretty one.

When withdrawing from the Dublin III Regulation, the government made a commitment to the 1951 Refugee Convention, of which the UK is a signatory. It pledged that leaving the EU would “not change the UK’s obligation to offer protection to refugees”. The government also claimed that “the UK’s status as a ‘world leader’ in the field of asylum will not change once it is no longer subject to EU laws”.

No doubt, if asked, the Home Office would say it has fulfilled those obligations, but their treatment of asylum seekers at Manston Asylum Centre in Kent would suggest otherwise. A note from a young detainee was recently thrown over the fence in a desperate plea for help. In it the young girl complained about bad food and said it was “like we’re in prison”. She said there were a lot of children on site who “shouldn’t be here …. they should be in school”.

A young girl detained in Manston threw this letter over the fence to a PA news agency photographer today.

“We are in a difficult life now … we fill like we’re in prison…some of us very sick … ther’s some women’s that are pregnant…We really need your help. Please help us." pic.twitter.com/FX8DShhjpy

Following recent bad press about overcrowding at Manston, the Home Office took action to rapidly remove hundreds of detainees. However, their ill-judged action included the shocking abandonment of 11 Afghan, Syrian and Iraqi asylum seekers at Victoria train station at 11pm on Tuesday evening. The asylum seekers were left without warm clothes, money, accommodation or food, some in flip-flops. Another 50 were abandoned at Victoria coach station. Thankfully charity volunteers stepped in to do the government’s job for them – offering the protection the government claimed to be committed to offering refugees.

Asylum seekers are desperate people escaping desperate circumstances. They would have to be, just to put themselves through the expense, horror and danger of the journey that brings them to our shores. They deserve to be treated with dignity and compassion. To have their applications dealt with in a timely and sensitive fashion and to be housed in decent living conditions in the meantime. They deserve to be offered to opportunity to contribute to British society, as they so desperately wish. They do not deserve the treatment they receive at the hands of a government that is not acting on behalf of anyone but themselves.