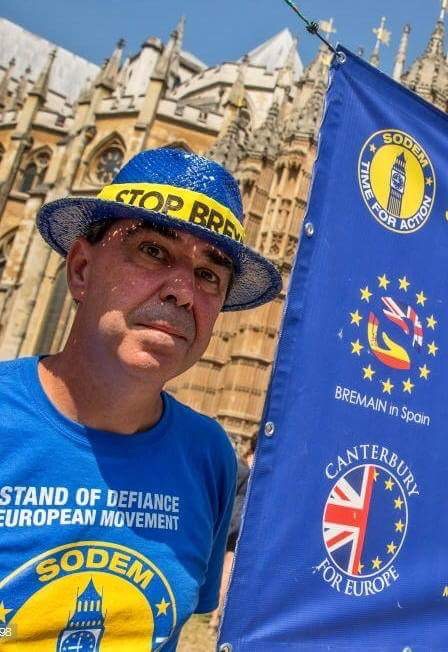 In the second of our series of exclusive Bremain in Spain interviews with Remain activists Bremainers Ask…. we talk to Steven Bray from SODEM about his vigil on St Stephen’s Green opposite Parliament. Steven and his supporters are there every day when Parliament is sitting and supporters are welcome to come along and join him. Steven gives us a bit of background about himself:

Steve is originally from Wales but spent his childhood in various locations due to his father’s military background.  Steve is a passionate coin collector, having started collecting at the age of six. He turned his hobby into a business in 2001, though admits that he sometimes finds it hard to sell, as he struggles to let certain coins go.

Until the referendum, he describes himself as “just plodding along”, and says it’s a shame that it took a disaster to wake him up so he could take life by the horns. He tells us that there are so many things that he never appreciated or never got round to doing. Now he does appreciate all manner of things, and he will get up and do them! Steve finished by thanking us at Bremain for our efforts. He is certain that united, as a team across the UK and Europe, we are a force to be reckoned with, and together we will stop Brexit – FULL STOP!

Below are Steve’s answers to a few of the questions put forward by Bremain in Spain members:

Pat Kennedy: “What is your main motivation for keeping this incredible vigil?”

Steven Bray: “My main motivation in keeping this going is that countless people’s lives are being torn apart in the UK and in Europe. It’s a massive social injustice. Every deprived area of the UK voted to leave… false hope from false promises, misleading information and blatant lies. We were always going to be better off socially and economically as a member of the EU. This is not who we are, and it is certainly no way to govern a nation. We are the good guys, and it is down to each and every one of us to stop Brexit.”

Judith Hartley: “Do the reporters tell you when they’re on air, or do you sneak up like a ninja to wave the flag?”

Steven Bray: “Occasionally, a reporter will tell me they’re on and ask me or a few of us to come down. It’s quite rare, though: 99 times out of a hundred we remain silent. We make an exception for ‘The Mogg’ (perhaps some of you will have seen his interview last week) and a few others. Once we are there, they are live and know there is little they can do. One funny one was Al Jazeera TV – the producer was jumping up and down silently by the camera, really angry, “shouting” in silence. It was funny to watch.”

Mo Clements: “Is there any one person who has been particularly nasty? And who has been the most hopeful and encouraging?”

Steven Bray: “The one person I encountered that was particularly nasty was John Redwood. I really think he is actually certifiable. The nicest person… hmm… I’ve met so many genuine and nice people. I can’t possibly nail it down to one. I will say this: Something the MPs never say to me – the one benefit of the referendum is the people I have met and the friends I have made. I think we can all honestly give credit to that one point. Remainers have crossed all the boundaries in whom we now socialise with and accept as friends.”

Sandra Stretton: Do you have any plans for the future once we have stopped Brexit?

Steven Bray: “My future plans after Brexit is stopped are to campaign to ensure that our electoral system is addressed. The two-horse race that is over a century old is not fit for purpose for the 21st Century. Proportional representation is a must. I’ll also go back to dealing in coins, and one day I hope to retire to Spain or Malta. This may amuse you, but I have never been to Spain! One day…” 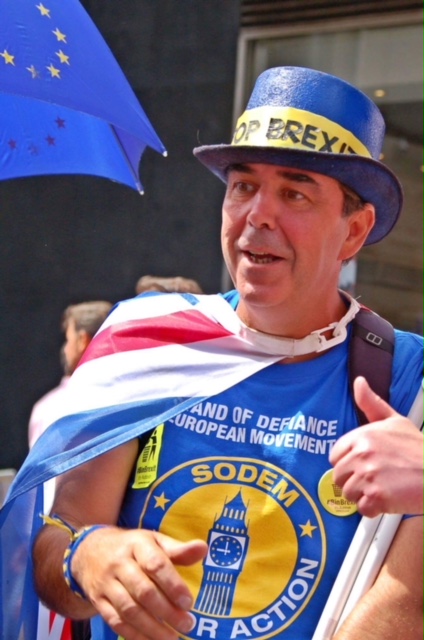 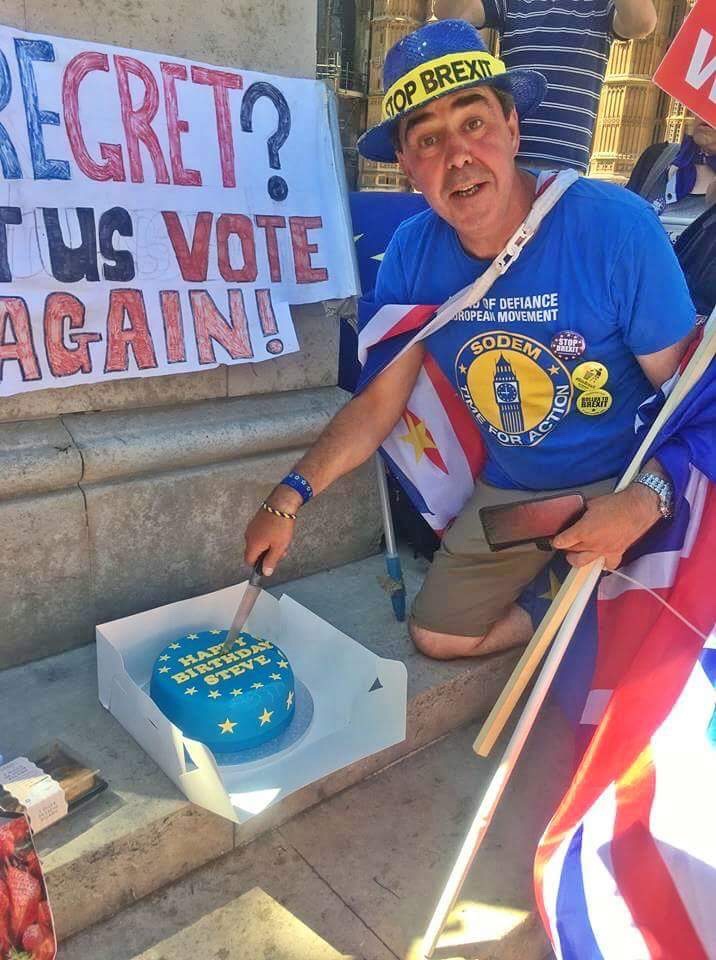 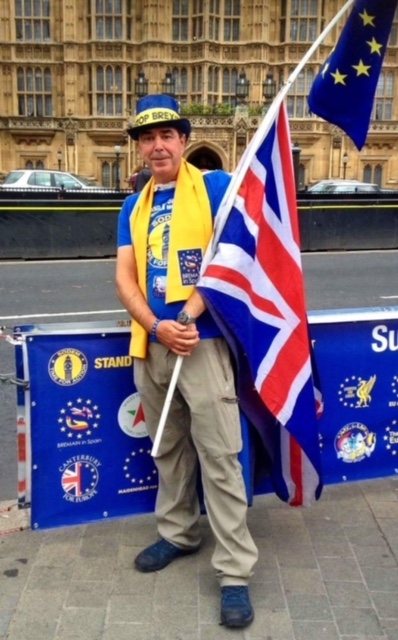 Ruth Woodhouse: “What do you plan to do in the event of the worst case scenario of the UK leaving the EU?

Steven Bray: “I can’t plan for an event that will never happen!”

Alison Curtis: (1) “Do you have a sense, from people’s reactions, that support for Brexit is changing?”

Steven Bray: “As time has gone by, I have seen a distinct change in people’s approach to us. The black cab drivers used to be very vocal in favour of Leave, and that has declined at least 80% in the last five months. That has to be a good benchmark. There is far more support now than there was back when we started. The tide is turning. The  more people see the butterfly effect and implications, the more they realize how dire the consequences of leaving the European Union really are.” 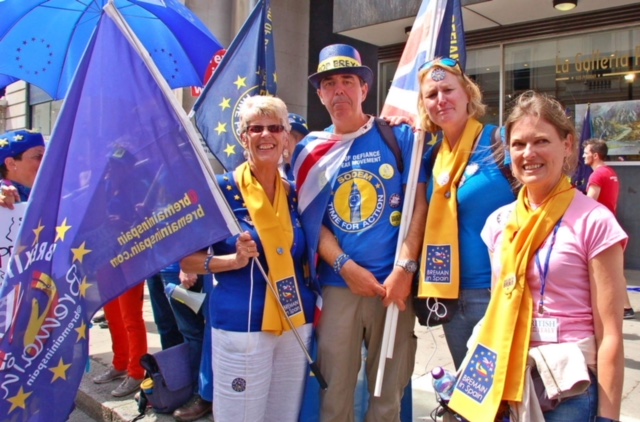 Alison Curtis: (2) “Are there days when you wonder whether SODEM is worth getting up for?”

Steven Bray: “There is not one day that I think, ‘I can’t do SODEM today!’ Every single day is worth it – for so many people in Britain and Europe. I wish I could do more.”

Gerald Abell: “Why do you do what you do?”

Steven Bray: “I have always been relentless in what I do, but it does come at a price. I have to give 100% to what I do. I can’t multi task so to speak, so to try to keep my business going AND give what I give now would be impossible, and both would suffer. One day I will go back to my business… and we will still be members of the European Union!”

Thanks to Steven for taking the time to answer our questions. You can follow Steven and SODEM on their Facebook Page:

Next time, Eloise Todd, CEO of Best for Britain answers your questions which can be submitted in advance via enquiries@bremaininspain.com

Recently, Bremain’s Media Relations Officer, James Gambrill, joined Steven on his vigil and presented him with a Bremain in Spain scarf. Here’s his story:

“On a recent trip to London, I once again took time out to thank the people who, come rain or shine, continue to make our voices heard outside the courts and parliament. My morning started off thanking all those who had attended the overnight vigil outside the High Court. It was nice to put some more faces to names. Unfortunately due to work commitments, I wasn’t able to join them on the actual vigil, but I think they were grateful for a cheery ‘good morning’ and thanks on behalf of all of us.

In the afternoon, I stopped by at the SODEM muster point to hand deliver a gift from Bremain to Steven Bray. A couple of days before my trip, fellow council member Elspeth Williams had mentioned that Steve quite liked our Bremain in Spain scarfs. So one of my tasks was to give him a scarf as a thank you for all he does each day. The weather has since changed somewhat in the UK so he may not be needing it as much of late, but it did get an airing on C4 news that evening!

It was SODEM’s ‘Pies not Lies’ day. There was a great crowd, and just before I arrived Philip Lee had resigned, which had a positive impact on the day’s “Stop Brexit” chants. It was good to catch up with people from many different groups, some of whom I’ve now met several times. I even bumped in to fellow Bremainer Cliff, who attended a Bremain barnstorm event recently in La Herradura.

With so many news teams on the green that day for May’s cramming session of the Lords’ amendments, Steve and friends weren’t able to flag bomb as much as usual, but they found a way to be featured by lining the pavement instead, which led to quite a few TV appearances. I also got the impression that the tide is well and truly turning, as many more passing by were in support of stopping Brexit than was the case the last time I visited.

I know it’s not possible for all of us to pop by, grab a flag and show our support, but if you are ever in London, a visit to SODEM really is worth it – and much appreciated by Steve and all the team. Thank you to everyone who has already stopped by to show their support!”

Steven sent a video message to Bremain in Spain members via James prior to the People’s Vote March on June 23rd: