We’re delighted that Debbie Williams and Elena Remigi of the In Limbo project have agreed to answer questions from Bremain members this month. Below you can find out more about the project and our two interviewees, followed by their answers to your questions.

Description of the project

The In Limbo Project is a not-for-profit, non-political initiative set up by a group of EU citizens to record testimonies from the five million victims of Brexit and to allow their voices to be heard.

A true grassroots endeavour, the In Limbo project has gone from strength to strength as the books have become the go-to reference documents for understanding the harrowing human cost of Brexit for all those who, having embraced the European dream and built their life on it, have been plunged into an anguishing limbo since June 2016. These 5 million people risk losing everything (their homes, their friends, their jobs, their families, their sense of identity…) through no fault of their own and, for most of them, without their having had any say in what’s happening. 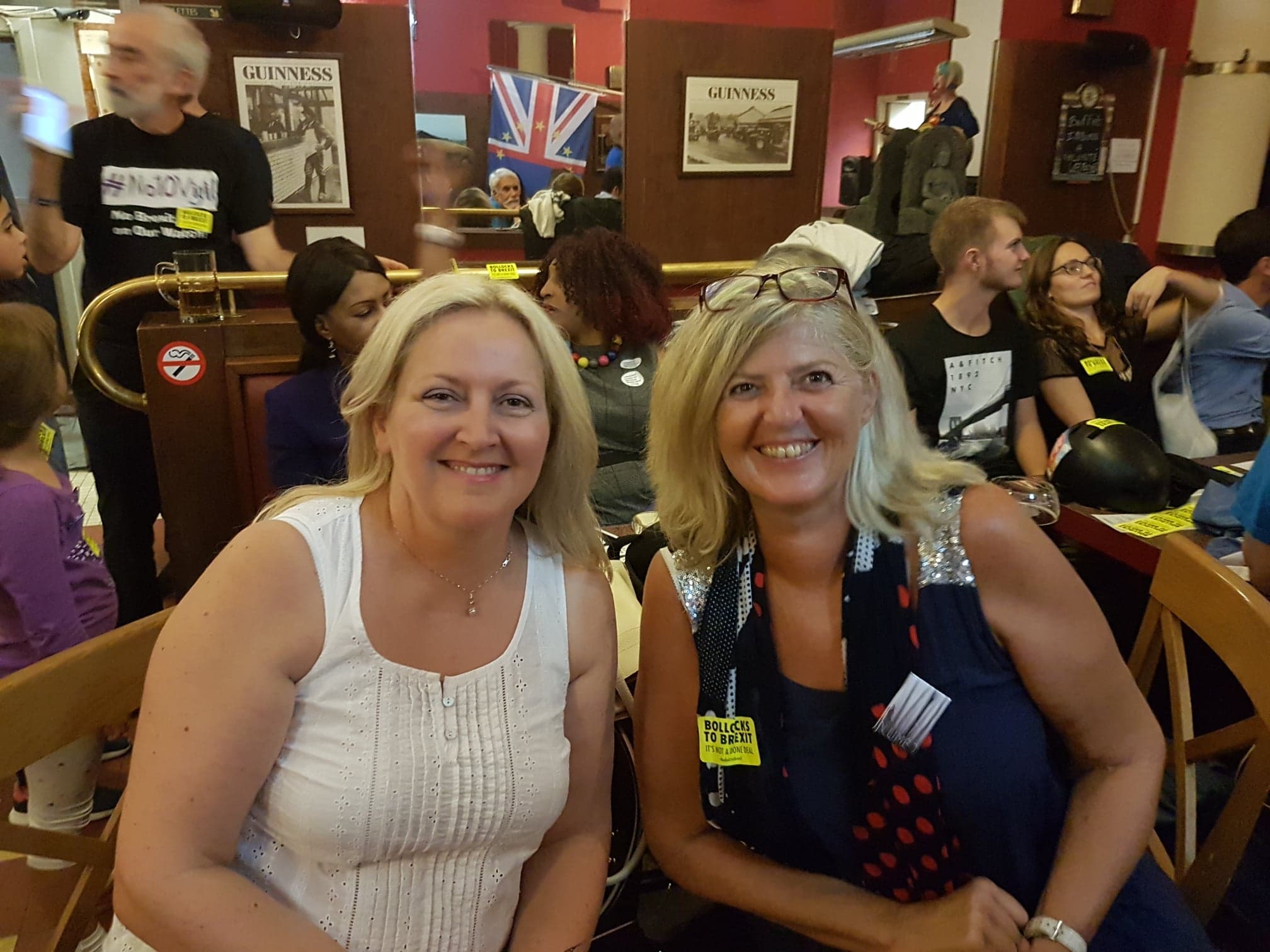 Elena Remigi is an interpreter and translator originally from Milan, Italy. She moved to the UK in 2005 with her husband and son, after spending 6 years in Ireland. She is Founder and Director of the In Limbo project and co-editor of ‘In Limbo & In Limbo Too: Brexit Testimonies for EU Citizens’.

Debbie Williams is Welsh, and recently moved to Spain from the Netherlands. She founded ‘Brexpats – Hear our Voice’ in June 2016 and is on the Steering Committee of British in Europe. Debbie is co-editor of ‘In Limbo Too’.

Jo-Jo Chipper: “In the case histories you have collected, what is the most frequently-occurring fear voiced by the participants?”

Elena: “For EU citizens in the UK, the most recurring fear is that of not being allowed to stay in Britain due to a lack of documents and the presence of Theresa May’s hostile environment. Let’s not forget that some of our members have been dealing with this daily when trying, for instance, to obtain permanent residence. To give you a small example, in the summer of 2017, the HO sent some deportation letters ‘by mistake’. Some were sent to members of In Limbo. One was sent to a Finnish academic; another to a car factory worker upon his return from the holidays. In this context, you can understand why the most vulnerable ones in particular are very afraid about their future.

The worries may differ but there is a common denominator: the fear of the unknown, a sense of betrayal because our rights have not been guaranteed and anger for not having had a voice in this referendum and what followed.”

Tracy Rolfe: “How much overlap is there between the two groups? Are they mirror images of each other or are there lots of differences?”

Debbie: “We are very much sister groups based on shared circumstances, and also that has now developed into personal friendships. There are many similar worries. Of course, each person is affected emotionally in different ways but the common denominator is one of anxiety based on the unknown.”

Elena: “In both groups, there’s a good mixture of EU citizens in the UK and UK citizens in the EU27. Working together has deepened our friendship and made us realise the importance of collaborating to ensure that all our rights are ring-fenced. Both groups of citizens are at serious risk, particularly in the case of a no-deal. The suffering is also the same, so in this sense we are mirror images of each other.”

Debbie and Elena: “That’s a tricky one to answer. It depends on who you talk too. Within the two groups there is solidarity and understanding; outside of our safe places there are mixed messages. However, we will not be anything other than one united immigrant voice.” 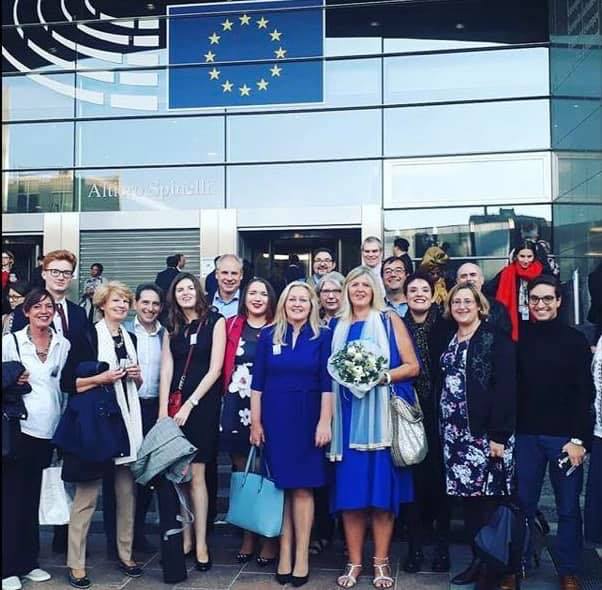 Pat Kennedy: “Have there been any interesting or helpful responses from politicians who have been presented with the books?”

Debbie: “With ‘In Limbo Too’, yes – encouraging and supportive words from many MEPs, a couple of MPs, and in the Lords. Three MEPs supported us in our presentation to the European Parliament last October.”

Elena: “Both books have received a lot of supportive messages from MPs, MEPs, Ambassadors and other political figures. The first book in particular has been sent to over 1000 politicians and we aim to do the same with the second. It’s imperative that our voices be heard.”

Sandra Stretton: “Do you have another book in the pipeline?”

Elena: “The In Limbo project was conceived as a duology from the beginning. There is no other book in the pipeline, but we will continue to document everything that happens to EU citizens in the UK and to UK citizens in the EU27, as our rights have not been fully guaranteed yet. In the case of EU citizens in the UK, there are grave concerns regarding Settled Status, given it’s an application made in a country known for the hostile environment introduced by Theresa May. It’s already causing problems now, and we wonder what will come next. For Brits in the EU27, there are concerns linked to the various registration systems put in place, access to healthcare and loss of freedom of movement and what that will mean for people working across borders. So this will remain an open project which will give a voice to the voiceless and consign these testimonies to future generations to understand – and hopefully learn from – what happened. 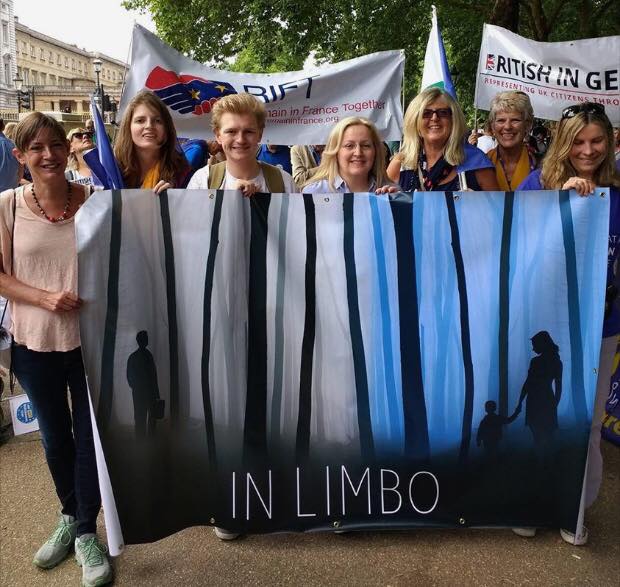 James Gambrill: “How has being involved with the In Limbo project changed your own personal outlook?”

Debbie: “I now have a better understanding about the issues surrounding migration, the preconceived ideas and stereotyping of people. It has opened my eyes to not only European migration but all migration and asylum issues. The human side always seems to be forgotten: Every individual is unique, and the treatment of people by some governments is a disgrace.”

Elena: “Totally agree with Debbie – I would not add anything else.”

Debbie: “As a group, BHOV has had some understandable stick for the word ‘Brexpats’. I take full responsibility for naming it, and I’m hating it more as each day passes. But in consultation with the group we have decided to keep it as it is known and a reminder each day that we are not expats, we are immigrants, like all mobile citizens.”

Elena: “Personally, I think that in terms of the books, they have been equally well received. ‘In Limbo’ being the first volume, it created quite a stir when it came out in 2017, but I would have always felt it to be an incomplete work if the stories of the Brits in Europe hadn’t been told.

Regarding the perception of migrants, however, there is a difference. Since the referendum campaign, here in the UK, EU citizens have had to fight against a narrative which all of a sudden has depicted us as unwelcome migrants, as the ‘other’, the enemy, as people who weigh on the system. We have also had to deal with innumerable cases of xenophobia and hate crimes. The last we heard was yesterday by a member whose windows were vandalised. I don’t think that’s the case for most Brits in Europe, so in that I see a divergence.”

Zoe Adams Green: “What first gave you the idea of a book of testimonials?”

Elena: “The idea of the book came from my personal experience of dealing with the Home Office. When I obtained permanent residence after filling in the infamous 85-page document and sending 5 kilos of evidence, I decided to apply for citizenship.

On top of all the tests and documents already requested by the Home Office, I had to send an additional 3 kilos of evidence (including detailed bank statements and medical reports), as the Home Office simply wouldn’t believe that I had been living in this country for over 13 years even though I had a house, a car and a mortgage here. Sadly, I realised that I was not an isolated case, and this opened my eyes to the plight of many others.

Above all, after the referendum I noticed that many people had started sharing their feelings of anger, worry, disappointment and even betrayal on Facebook, and so I thought that if our voices could be collected in a book they could become a much stronger, collective voice. The aim of In Limbo is therefore to show the human side and the human cost of the Brexit story.”

Kay Adams: “Once Brexit is resolved, one way or the other, will you still be actively involved in citizens’/human rights campaigning?”

Debbie: “Absolutely yes for me. There is no way we should ever dehumanise people on the basis of their origins, we should never again see people be stripped of their rights without their permission.” 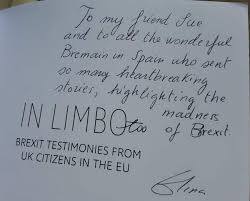 Elena: “Definitely yes. This experience has opened my eyes to the plight of countless other people: EU citizens in the UK, UK citizens in the EU27, non-EU migrants or refugees, and it has given me a better insight into the hostile environment and the impact it has had on countless lives (for example on those of the Windrush generation). The fact is that I can no longer close my eyes after what I have heard from private chats or have read, so I think that I will continue to be involved in one way or another in these issues.”

Many thanks from the Bremain team to Elena and Debbie – and thanks also to the Bremain members who sent in their testimonies to the In Limbo project.