We get it, and we have listened: government U-turn on uncosted tax cuts 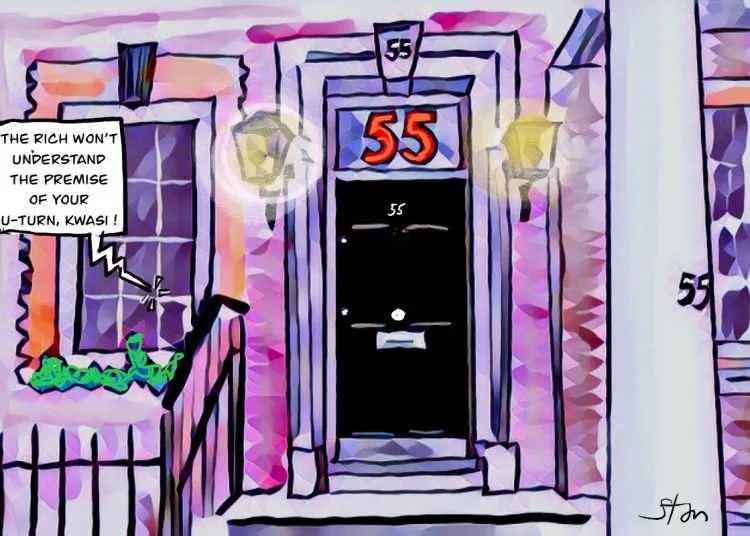 The country gets it. We have listened. Can we now bring on the general election and rid the country of Trussonomics and KamiKwasi thinking? Bremain Chair,Sue Wilson MBE, writes for Yorkshire Bylines.

One of the most unpopular decisions made by the Liz Truss government has resulted in a screeching U-turn in the middle of the Conservatory Party conference. The decision to abolish the 45% tax rate for the highest paid 1% of the country has been reversed. While Truss, Chancellor Kwasi Kwarteng and Treasury Secretary Chris Philp argue about whose daft idea it was in the first place, the spin machine is going into overdrive.

One of the most unpopular decisions made by the Liz Truss government has resulted in a screeching U-turn in the middle of the Conservatory Party conference. The decision to abolish the 45% tax rate for the highest paid 1% of the country has been reversed. While Truss, Chancellor Kwasi Kwarteng and Treasury Secretary Chris Philp argue about whose daft idea it was in the first place, the spin machine is going into overdrive.

Humility and contrition but no apology

An official statement from the chancellor described the 45p tax rate as a “distraction” from the government’s “overriding mission to tackle the challenges we face”. In a quote re-iterated by Truss herself, Kwarteng said “we get it, and we have listened”. However, who they had listened to wasn’t made clear. It’s unlikely that they listened to the public if, indeed, they ever engage with them on anything. Their recent mad-cap ideas would suggest otherwise.

Perhaps, instead, they had listened to the markets. Or perhaps to their donors, who journalist Robert Peston said had told the party “We don’t need the money, we don’t want the money and you are bringing us into disrepute”.

Why did @KwasiKwarteng and @trussliz drop the abolition of the 45p top tax rate? Because super wealthy donors to the Tory party told them “we don’t need the money, we don’t want the money and you are bringing us into disrepute”. This is the highest political farce

Or, heaven forbid, did the government listen to some genuine economic experts? Or was it just the cries from their own, baffled and worried backbenchers that caused the reversed ferret?

What we do know is that Kwarteng is “happy to own the humiliation” but not willing to say sorry for the worry or the damage. Presumably because, like Truss, he genuinely believes it was the right move in the first place and it’s just that the country doesn’t understand his genius.

We get it and we have listened.

The abolition of the 45pc rate had become a distraction from our mission to get Britain moving.

Our focus now is on building a high growth economy that funds world-class public services, boosts wages, and creates opportunities across the country. https://t.co/ee4ZFc7Aes

The damage is done

Despite subsequent efforts to downplay the significance of the proposed tax cuts, Kwarteng had saved that particular announcement until last in his mini-budget speech last Friday. The tax cut proposals drew immediate and vehement criticism, not least from the International Monetary Fund (IMF).

The pound responded so badly that the Bank of England was forced to take the unprecedented step of a £65bn emergency intervention, in an effort to restore order.

Shadow Chancellor Rachel Reeves said the abandonment of the policy comes too late for families paying higher mortgages and prices. The Tories, she said, “have destroyed their economic credibility and damaged trust in the British economy”. The whole strategy of trickle-down economics had been “discredited”, she said, with the government “making it up as they go along”.

The PM has been forced to abandon her unfunded tax cut for the richest 1%.

But it comes too late for the families who will pay higher mortgages and higher prices for years.

The Tories have destroyed their economic credibility and damaged trust in the British economy. 1/3

Labour MP Chris Elmore also expressed concerns about mortgage rates, after lenders withdrew hundreds of mortgage products as a direct result of the chancellor’s actions. Not only were many facing “massive hikes in their mortgages”, Elmore said, but first-time buyers were being “frozen out”. He added, “the damage is done”.

Of course, the abandoned tax cut was not the only issue of concern over the government’s economic policies. If you can call them that. The whole idea that cutting taxes will stimulate growth would be laughable if it wasn’t so scary. Worse still is the prospect that any cuts in tax will be funded either by increasingly expensive borrowing or by public sector cuts. And let’s not forget, borrowing has now become more expensive thanks to rising inflation caused largely by [checks notes] government actions.

But, never fear. Truss and Kwarteng have everything under control. Their energy price guarantee “will support households and businesses with their energy bills”. Better yet, their policy of cutting taxes will “put money back in the pockets of 30 million hard-working people and grow the economy”. Not sure what will happen to all those who don’t ‘work hard’, but then you can’t win them all.

Finally, in his U-turn statement the chancellor said the government was “driving supply side reforms”, whatever that is supposed to mean. Apparently, that includes accelerating major infrastructure projects – “to get Britain moving”

The government will be hoping, if not expecting, that this latest U-turn will draw a line under its recent, and catastrophic, misjudgements. Even if some are prepared to give Truss and Kwarteng the benefit of the doubt, for others this latest debacle will just be the straw that finally broke the camel’s back.

The public are waking up, Tory donors included. Multi-millionaire and former Conservative Party donor, Gareth Quarry, has just defected to Labour. He described Truss and Kwarteng as “two zealots” following a policy of “GCSE economics”. Quarry said their proposals were like “a game of roulette where they’re just betting everything on one number coming up in the next spin”.

Former Tory donor, says "the Tories’ behaviour over several years has made the UK a laughing stock," accuses them of being "zealots" pursuing "GCSE Economics" policies – and donates £100k to Labour.

What a scoop. What an interview. No paywall. ~AAhttps://t.co/wtTEPdtrJU

While Truss and Kwarteng may hope for forgiveness, or at least for short memories, they are ignoring what, for most of the country, is the bleeding obvious. Even though the tax cut for the relatively few paying the highest rate of tax has been abandoned, it is what this government wanted. Truss’s government believed in it – and still does.

We have listened. All it took was tanking the pound, wrecking the economy, wiping $500billion of the market and the Bank of England spending £65billion to save pension funds. We get it.

Truss and Kwarteng might now expect credit for doing the right thing, but they were forced into it and it was against their better judgement. The Conservative Party is now seen as the party that tried to cut taxes for the very richest people in our society in the middle of a cost-of-living crisis affecting millions. Not only would they have forced further hardships on those already facing poverty, but they expected us all to pay for it, not just now, for years to come.

So, please, can we just bring on the general election and let’s rid the country of Trussonomics and KamiKwasi thinking. The country gets it, and we have listened. And we don’t want to hear any more.