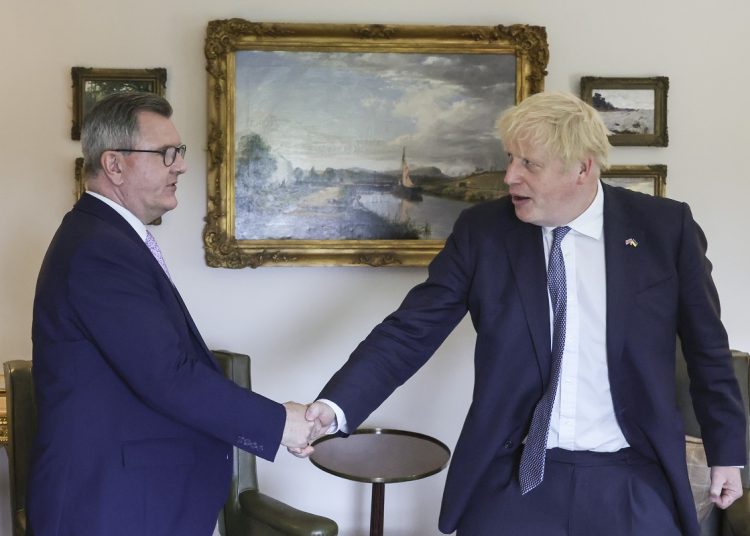 This was not the first time we have heard from the UK government that the negotiated Brexit deal – and the protocol – is not fit for purpose, writes Bremain Chair Sue WILSON MBE for Yorkshire Bylines.

When Brexit opportunities minister, Jacob Rees-Mogg, gave evidence to the European scrutiny committee, back in April, he announced the government’s plans to act unilaterally over issues relating to the Northern Ireland protocol. It was “widely accepted”, he claimed, “that the protocol is not working and needs reform”.

This was not the first time we had heard from a government minister, or indeed the prime minister himself, that the negotiated Brexit deal is not fit for purpose. Despite the deal being hailed as a huge triumph, and sold to parliament and the public as such, it seems that the only motivations were getting Brexit “done”, and getting Boris Johnson re-elected.

According to Rees-Mogg, the deal was only signed “on the basis that it would be reformed”, and if the EU wouldn’t reform it, then the UK government would do so unilaterally.

Met @simoncoveney at @coe. I was clear that our priority is upholding the Belfast Good Friday Agreement and restoring political stability in Northern Ireland.

We remain open to a negotiated solution but we cannot allow any more drift. pic.twitter.com/aLnnBDR3R7

The EU is sadly familiar with UK government attempts to threaten, blame and bully. Threats to act unilaterally, such as by triggering Article 16 – the safeguarding mechanism within the protocol itself – are hardly new. Regarded largely as empty threats by the EU, they have only succeeded in destroying any remaining trust between the two parties and harming EU/UK relations.

The supposed justification for doing so, according to the foreign secretary, Liz Truss, is “upholding the Belfast Good Friday Agreement (GFA) and restoring political stability”. With the exception of the Democratic Unionist Party (DUP), other parties, other countries, and especially the EU and USA say the only way to achieve both those desirable aims is to implement the protocol. The protocol is not the problem. The protocol is the solution – the only one possible. The problem is the hard Brexit the government – not the country – chose.

It continues to be of serious concern that the UK government intends to embark on the path of unilateral action.

Effectively disapplying an international agreement is simply not acceptable.

Statement by Vice President @MarosSefcovic on the Protocol on Northern Ireland ↓

The drastic – and illegal – plans have been widely criticised across Europe. Maroš Šefčovič, vice president of the European Commission and chief EU Brexit negotiator, said plans to suspend parts of the protocol were “simply not acceptable”.

Although it hopes to avoid such action by UK authorities, the EU is preparing plans to retaliate if necessary. These plans could include a trade war, with tariffs being applied, suspending parts of the trade and cooperation agreement, or terminating the trade agreement in its entirety.

“We need trust and we must remember what unites us and we must avoid unilateral action” @RobertaMetsola opens the EU UK Parliamentary Assembly in Brussels. “The EU will not renegotiate the Ireland/Northern Ireland Protocol” pic.twitter.com/hvnSH17xVh

Not for the first time, the EU has reiterated that renegotiation of the protocol is not on the table.

Criticism from the island of Ireland

Time for UK/EU partnership, compromise & dialogue to solve outstanding Protocol issues, not Unilateral action that breaches international law and further damages trust.
There is a landing ground that responds to legitimate concerns – let’s get there. pic.twitter.com/Gaedm6Ky3h

First Minister of Northern Ireland, Michelle O’Neill, said unilateral action to denounce the withdrawal agreement or disapply the protocol, was “reckless”. She added that Johnson was “feeding political instability and economic uncertainty”.

Unilateral action by the British govt to denounce the Withdrawal Agreement, or disapply the Protocol is reckless.

Sinn Féin president, Mary Lou Macdonald, claimed that Johnson was “in cahoots with” and facilitating the DUP in a “game of brinkmanship”. The DUP, who are deliberately blocking power-sharing at Stormont, have welcomed the UK government’s proposals. They insist that the protocol is damaging the economy of Northern Ireland, and the protocol does not have the support of the people of Northern Ireland. The results of the recent elections disprove that claim. As do the Northern Irish business groups pleading with the prime minister not to take unilateral action.

Though not without Brexit-related problems, Northern Ireland has benefitted from the ability to trade freely with both unions – the UK and the EU – a point the UK government would prefer went unnoticed. Northern Ireland’s continued membership of the European single market has brought many benefits and opportunities, though not the ones Rees-Mogg is still searching for. Scotland, Wales, and probably England too, can only look on with envy.

Revealed: 14 business groups wrote to Boris Johnson pleading with him not to take unilateral action on the Northern Ireland protocol. https://t.co/VkQcjiwOgK

Rumblings from across the pond

The American authorities are so concerned about the latest threat to the Good Friday Agreement that they sent a delegation of senators to London, Brussels, Belfast and Dublin.

Speaker Nancy Pelosi had recently warned that Congress would not back any trade deal with the UK if the UK government discards the protocol. President Biden has made similar comments and takes the US role as guarantor of the GFA very seriously. Following a meeting between the US delegation and the EU, a joint statement was issued confirming US solidarity for the EU position – no renegotiation of the protocol.

One of the many misleading and disingenuous claims the Brexiters made about Brexit was the freedom for Britain to stand on its own two feet. It is perhaps one Brexit promise that has come closest to being realised, though perhaps not in the way the government, or the public, visualised. The UK is alone, but as a result of being isolated, side-lined and distrusted by those it needs to work with, and trade with.

Although clearly on the government’s agenda, the planned legislation aiming to override the protocol did not make the Queen’s Speech, which sets out the legislative agenda for the coming year. Yet a week later, it was back on the table. Did even this government – with seemingly no qualms about making the country more extremist – draw the line at having the head of state present plans to break international law?

Even our government now admits that it signed the protocol in bad faith. While Johnson is still in charge, any head of state thinking of signing a deal with the UK, would be well advised to count their fingers following any handshake with our PM.

Johnson is not to be trusted. Which sadly means, neither is Britain.