Northern Ireland protocol ‘home stretch’, or more kicking the can down the road? 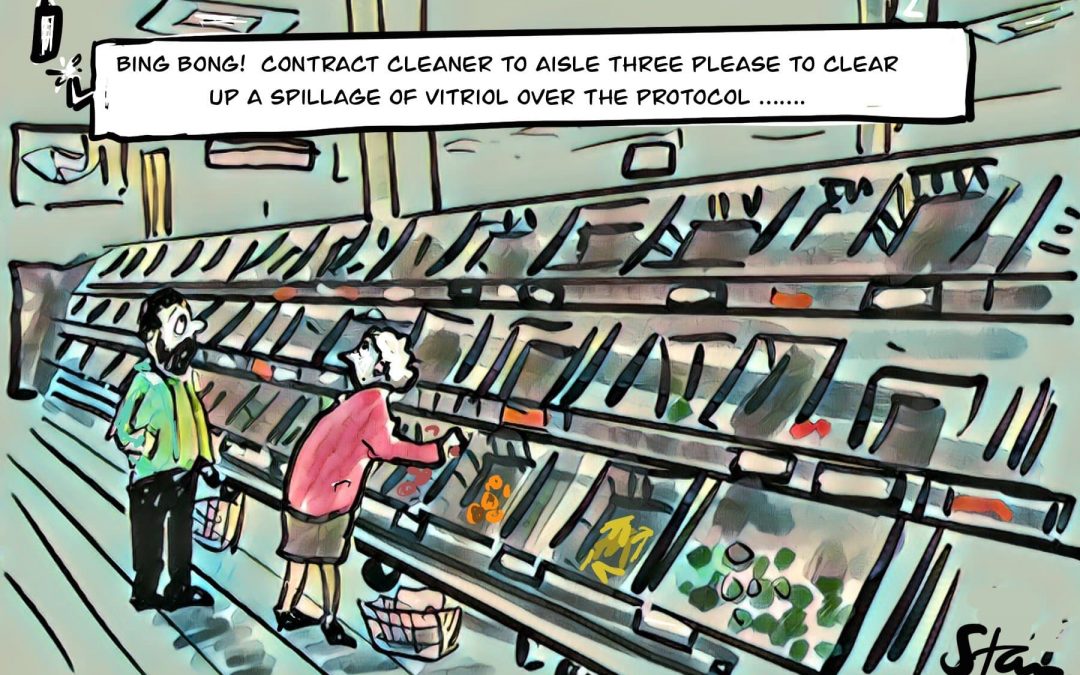 Over recent weeks, the EU has been promising to come up with practical proposals to resolve issues surrounding the Northern Ireland protocol, writes Bremain Chair Sue Wilson MBE for Yorkshire Bylines. Those “far-reaching proposals” were finally announced by vice president of the European Commission, Maros Šefčovič on 13 October. Before they were even published, however, they had all but been rejected by Brexit negotiator, Lord Frost, in what the press were labelling a “prebuttal”.

Frost had seemed determined, even before his speech in Portugal on Tuesday, to throw a spanner into the negotiating works. He had accused the EU of “not listening”, said the deal required significant changes, and demanded the removal of the role of the European Court of Justice (ECJ) in overseeing the protocol.

Irish foreign minister, Simon Coveney warned that the EU was “close to the end of the road” and accused the UK government of deliberately creating a “red line” barrier to progress. Declan Kearney, of Sinn Féin, had an accusation of his own, suggesting the government was throwing a “dead cat” on the table. He added that the EU was about to call the UK’s bluff. All before either Frost or the EU had made their official statements.

The speech, peppered with digs at the EU and half-veiled threats, was a withered olive branch delivered with menace. It seemed designed to rile the EU27 and the Commission into hardening their position | Anthony Robinson@AnthonyBylines @BylineTimes https://t.co/NDdz9qFblT

A day ahead of the EU’s expected response to his earlier ‘command paper’, Frost confirmed his view that a hard Brexit was vital in order for Brexit, and Britain, to succeed. He viewed the removal of the UK from the customs union and single market as crucial to the success of the Brexit project – even if that wasn’t the impression given when the country was being asked to decide five years ago. Frost claimed it would be an “historic misjudgement” not to rewrite the Brexit deal.

Frost’s speech suggested that the protocol “could have worked” had it been “more sensitively implemented”, and that “the protocol represents a moment of EU overreach when the UK’s negotiating hand was tied”. Frost continued to imply that the protocol was imposed on the UK, rather than being a deal that was designed and agreed by the UK government, and “hailed by them as a masterpiece of statecraft”. Frost described the protocol as “the biggest source of mistrust” between the UK and the EU, apparently with a straight face.

For Brexit-ologists, Lord Frost's argument that a so-called hard Brexit – removal from all single market/customs union – was always vital for the project to succeed is notable. It makes sense, but was very much not what was billed before the referendum, beyond the zealots.

Guardian political correspondent, Peter Walker, questioned whether the views expressed by Frost were his own, or those of number 10. The question of whether Frost is playing bad cop, or if his approach is “part of a wider strategy”, remains on the table. Perhaps alongside all those cards we were supposed to be holding.

Baroness Chapman, Labour’s shadow Brexit minister, claimed that the government was “desperate to use a tussle with Brussels to distract from their domestic failures – whether on covid, the energy crisis, or the needless culling of thousands of pigs”. She said an opportunity had been missed “for the government to reset relations with our partners in the EU after a fractious start to our new relationship”.

Northern Ireland spokesperson for the Liberal Democrats, Alistair Carmichael, said, “The same minister who just months ago was trumpeting the government’s botched Brexit deal now says it’s intolerable and has to be changed. After all the upheaval British businesses have suffered and all the challenges they face now, they need certainty and support from the government, not more pointless posturing”.

Former prime minister (now deputy PM) of Ireland, Leo Varadkar said the UK government had “acted in bad faith”. He suggested that, “the message must go out to all countries around the world that this is a British government that doesn’t necessarily keep its word and doesn’t necessarily honour the agreements it makes”. Not exactly a glowing reference for ‘global Britain’, ahead of any future trade negotiations.

Former secretary general of the European Commission, David O’Sullivan, told LBC that Frost was “hardly credible”, and asked, “Why did he sign a text that he now wants to replace nine months later?” If former Number 10 adviser, Dominic Cummings is to be believed, the prime minister was also misrepresenting, and misunderstanding, his deal.

According to Cummings, “babbling” Boris had no intention of honouring the agreement he signed in haste. Not only did he not have a “scoobydoo” about the contents, but his only interest had been in winning the election. This claim was rejected by a Downing Street spokesperson, who insisted changes to the treaty were only sought after it became clear how Brussels was implementing the deal.

So Cummings is *openly* admitting that he and others agreed to the Protocol to win a general election, with no intention of abiding by it. Reminder: that is the Northern Ireland peace process they were playing with to win an election.

Following a briefing with the European parliament, the college of commissioners and all 27 EU ambassadors, Šefčovič announced the new proposals in a press conference on Wednesday. He described the proposals as a “robust package of creative, practical solutions designed to help Northern Ireland deal with the consequences of Brexit”.

Apparently, the revised proposal had been highly contentious, with one senior EU diplomat adding that there was “blood on the floor” following efforts to get the revised proposals accepted. Several countries have expressed their displeasure, and patience with the UK is said to be wearing very thin across Europe. Some countries, not least France, are already looking at retaliatory measures. For now, however, they have been reassured by the fact that the Commission has already prepared legal action, ranging from infringement proceedings to a full-blown trade war.

The EU’s proposals are meant as a starting point to discussion, with Brussels keen to continue a dialogue, if not a negotiation. The four-part proposal consists of:

Food safety and phytosanitary rules – changes will allow for unhindered access to food products, including ‘national identity’ goods such as sausages.
Customs – an “express lane” will facilitate the movement of goods from Great Britain to Northern Ireland; customs formalities for more businesses and goods are to be cut in half; plus an 80 percent reduction on the controls and checks on a range of retail goods.
Governance – the participation of Northern Ireland authorities will be boosted, addressing concerns that NI has no say in legislation.
Medicines – proposals for legislative amendments to EU law will ensure that life-saving drugs can be move easily between Great Britain and Northern Ireland.

The EU stands united behind Northern Ireland, while also protecting our internal market.

I invite the UK government to engage with us earnestly on our package of enhanced opportunities. With these proposals, I believe we could be in the homestretch when it comes to the Protocol. pic.twitter.com/ECyhYYWB4I

Šefčovič emphasised that the “EU stands united behind Northern Ireland, while also protecting our internal market”. He added, “Now I invite the UK government to engage with us earnestly and intensively on all our proposals. With them I’m convinced we could be in the home stretch when it comes to the protocol”. Discussions will continue later this week in Brussels.

That internal market protection Šefčovič spoke of does, of course, include maintaining the role of the ECJ. As he confirmed, “it’s very clear that we cannot have access to the single market without the supervision of the European Court of Justice.”

Whatever happened to Frost’s “excellent” deal?

I'm very pleased and proud to have led a great UK team to secure today's excellent deal with the EU.

Both sides worked tirelessly day after day in challenging conditions to get the biggest & broadest trade deal in the world, in record time.

Thank you all who made it happen.

Lord Frost’s dislike of his own deal is not a new development. Over recent weeks and months, we have grown accustomed to his criticism of the deal he previously described as “excellent”. It would appear that other Brexit-loving ministers are similarly changing their tone. No longer do we hear of the sunlit uplands, or the rosy post-Brexit future that awaits us. Rather, we hear excuses for the Brexit deal they rushed through parliament, with blame, as always, being directed at the EU.

According to staunch Brexiter Bernard Jenkin recently, the deal was signed “at a time when the government was weak and gripped by a constitutional crisis” and the nasty EU “took advantage”. Whether the Brexiters truly believe the EU is at fault or not, they are running out of excuses. They may be blind to the realities of Brexit. The rest of the world is not.

They cannot bring themselves to admit their great project is a disaster. Blaming is all they have left https://t.co/FaPHTfnzqy

Whether the UK government ever intended to honour the Brexit deal they supposedly signed in good faith, is becoming increasingly hard to accept. Even Frost himself suggested the government knew at the time that the deal was imperfect, and that it was signed merely to “Get Brexit Done”. Or more accurately, to get the election done. Every other issue, in true Conservative style, could be kicked down the road and dealt with, or blamed on the EU, later.

Frost has claimed that the EU “doesn’t always look like it wants the UK to succeed”. I’m sure the Brexit faithful will probably agree with him, but from where I’m standing, the boot is on the other foot. The state of relations between the EU is down to the UK, and Frost in particular. As for the state of the country, it looks like it’s Frost, Johnson and the Brexiters that don’t want the UK to succeed. If they do, in fact, care about our country’s future, they sure have a strange and damaging way of showing it.

When I said we would Get Brexit Done, I meant we would sign a shit deal that we had no intention of honouring, in order to win an election.#Newsnight