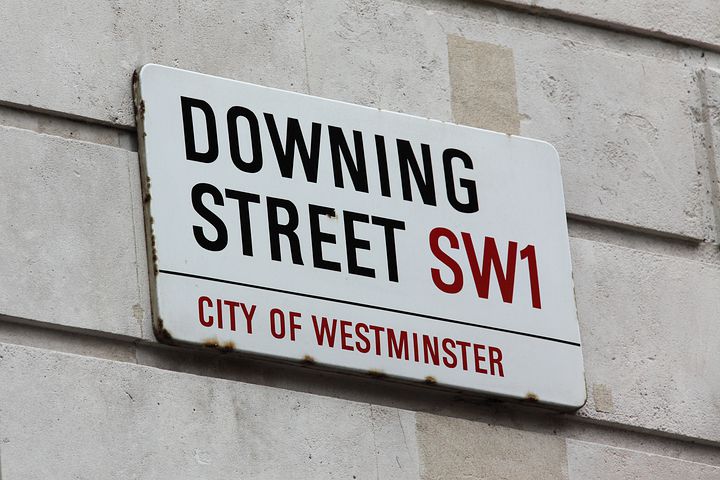 ‘These are my principles, if you don’t like them, I have others’ seems to be PM Liz Truss’s modus operandi. Lisa Burton, Bremain vice Chair takes a closer look for Yorkshire Bylines“

I’m against the idea that people can be born to rule – that people, because of the family they are born into, should be able to be the head of state of our country. I think that’s disgraceful.”– Liz Truss

Once, it was widely known and accepted that Britain had its fair share of republicans, but these are strange days in British society. Right-wing tabloids, commentators and a rise in nationalism mean that we must watch our language. Not showing enough reverence to royalty, the country, and even Brexit can land you in unpatriotic deep water. Indeed, criticism can even get you arrested.

Yet here we are. We have witnessed the new British prime minister get through an entire leadership contest, meet the Queen and subsequently King Charles with hardly a mention from mainstream media that she, a former Liberal Democrat, was a republican who campaigned for the abolition of the monarchy. When her previous views were reported, well before the death of the Queen, there was no criticism. Indeed the Daily Mail’s front page reporting was of her regret and mistake.

While social media responded to Truss’s bizarre attempt at a curtsy/bow, now dubbed ‘the burtsy’, with a mixture of cringe and humour, we should consider the abuse Jeremy Corbyn received on front page spreads when ‘he didn’t bow deeply enough’ at the Cenotaph.

The hypocrisy of the government-supporting media

Truss and her supporters would say it’s irrelevant because she was young, or she has changed her mind. So let’s pretend it was Keir Starmer or Nicola Sturgeon who campaigned for the abolition of the monarchy when young.

It is undeniable that the right-wing, Conservative-supporting media tabloids, like the Daily Mail, Sun and Express, would attempt to annihilate them over their stance. After all, the Mail ran 13 days of front-page coverage over ‘Beergate’ in line with the advice of their old pal Goebbels who said, “repeat a lie often enough it becomes truth”. Sorry, folks, it doesn’t change the law though.

Every time Corbyn interacted with the Queen, he was regularly attacked and criticised for his republican beliefs and perceived lack of respect, as these headlines show.

‘”Scruffy and disrespectful” Corbyn is slammed for his appearance at Cenotaph service.’ 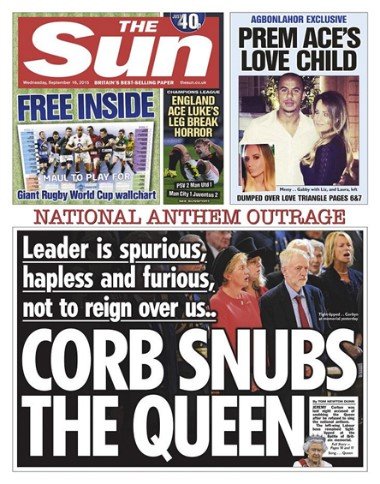 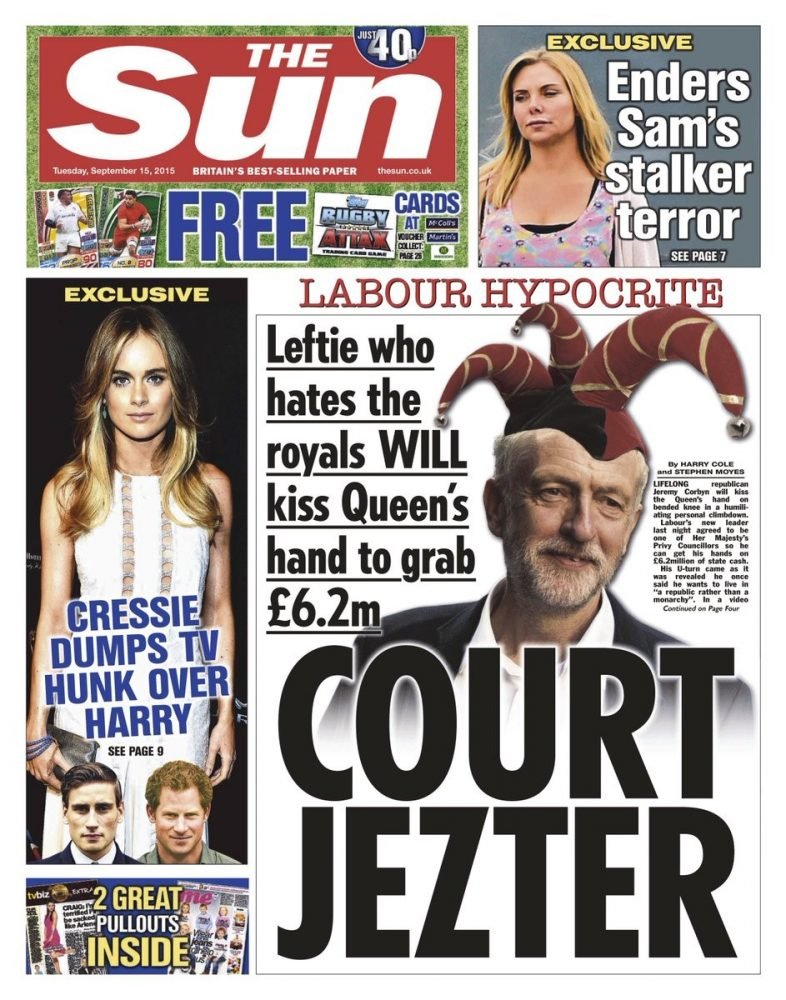 In her previous incarnation – before she became a Conservative and a monarchist – Truss was president of the Oxford University Liberal Democrats and very much an anti-monarchist.

In 1994 she made a ‘monarchy-bashing’ speech at the Liberal Democrat conference in Brighton. If a ‘leftie’ spoke these words previously, the tabloids and so-called ‘patriotic’ commentators would likely be foaming at the mouth:

“This Party, unlike Labour, will not duck and weave about debating the issues people are interested in. When they examine what we stand for, unlike the figure at the centre of this debate (meaning the Queen), we will not be caught with no clothes on.”

She is referring to the expression ‘the emperor has no clothes’, which describes a situation in which people are afraid to criticise something or someone because the perceived wisdom of the masses is that the thing or person is good or necessary. It is often used in political and social contexts for any obvious truth denied by the majority despite the evidence of their eyes, especially when proclaimed by the government

In the six years since the Brexit referendum, Truss has gone from being a vocal and ardent supporter of remaining in the European Union to being a ‘born again Brexiter’.

In May 2016, Truss, then secretary of state for the environment, addressed the Food and Drink Federation to speak about the benefits of the European single market and encourage them to vote remain. It is a speech worth listening to because, for once, she was spot on.

She was right to be concerned. The value of food exports to the EU dropped by £2.4bn in the first 15 months after Brexit, according to analysis of HMRC data.

“If we are a country like Norway, we’d have to fill in 50 boxes on a form every time we went to export something. In products like agricultural products, there’s a regime of quotas and tariffs.”

Right again. This is becoming impressive. Maybe Truss is a clairvoyant? 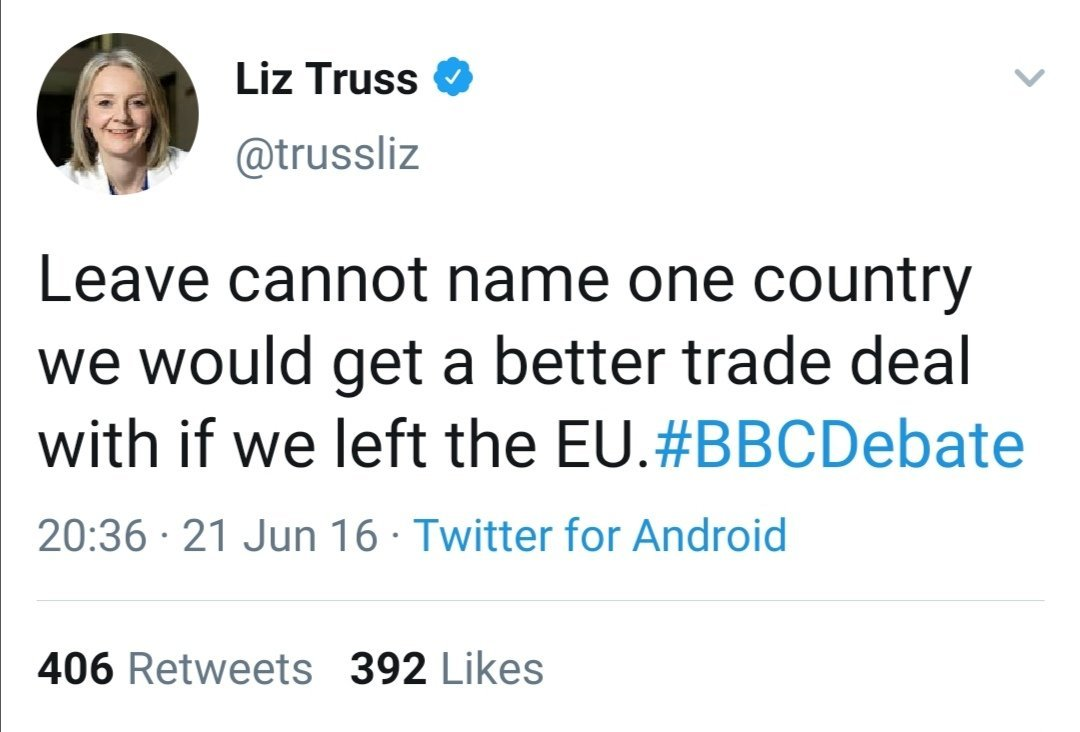 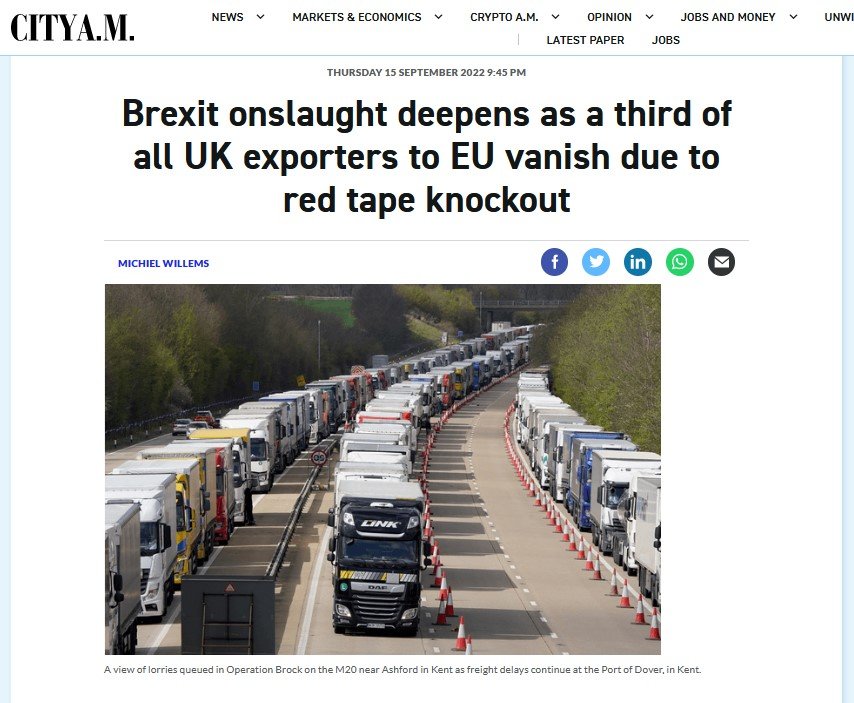 Speaking in 2016, the Conservative MP then said she championed Britain staying inside the EU to protect her daughters’ future and the environment.

I don’t want my daughters to grow up in a world where they need a visa or permit to work in Europe; or where they are hampered from growing a business because of extortionate call costs and barriers to trade.

“Every parent wants their children to grow up in a healthy environment with clean water, fresh air and thriving natural wonders. Being part of the EU helps protect these precious resources and spaces.”

Truss called this one right too. Brexit is cited as a factor in the recent sewage scandal, allowing water companies to increase how much sewage they discharge into Britain’s waterways and oceans.

Is she now happy that her daughters are hampered from growing a business due to extortionate costs? Does it fill her with glee that her children are now unable to travel freely, with no limits, to work, marry and retire in 26 other countries?

UK government members are no longer traditional Conservatives. The party’s lurch to the populist right has been ongoing since those same forces brought about Brexit.

It has become a country where all polling shows that the majority of the UK now thinks Brexit is a failure and mistake and evidence abounds of its damage. Yet, discussion in addressing issues around Brexit is shut down. People who express these opinions are called traitors, remoaners, and unpatriotic.

Liz Truss can turn from anti-monarchist to monarchist and Remainer to Brexiter without being crucified by the tabloids, because her words align with the people and forces pushing the hard-right political agenda in Britain. She is now their figurehead who will willingly do their bidding and be protected for as long as she toes their line.

The hard-right of the party now drives Conservative policy. The ERG, Taxpayers Alliance, and Net Zero Scrutiny groups are just some examples. I recommend reading this investigative report by Byline Times and this article by Ann Moody in Yorkshire Bylines, which expose that Truss’s Cabinet appears to be ideologically aligned with some of the most controversial themes of far-right activism in the USA, including women’s (abortion) rights.

Six of Truss’s Cabinet appointments and four of her advisors have funding ties to Conservative organisations connected to American billionaires, the Mercers. The Mercer lobby has been called “the chief financiers of the fascist movement”.

Will Truss stick or twist?

In an LBC interview with Eddie Mar in March 2019, the conversation with Truss went like this:

Eddie: “People can change their minds, can’t they?”

Truss: “But they were told in the referendum in 2016 that their vote would be implemented.”

Eddie: “What about people who have changed their minds between then and now?”

Truss: “I don’t think people have changed their minds.”

Ah, that’s ok then, and who knows, maybe the winds of politics will change direction, and Truss will become an anti-monarchist, liberal Remainer again. She might even regain some of her previous convictions. However, we can be reasonably sure that the right-wing, Conservative-supporting tabloids wouldn’t let her off so lightly if she shifted in the other direction.