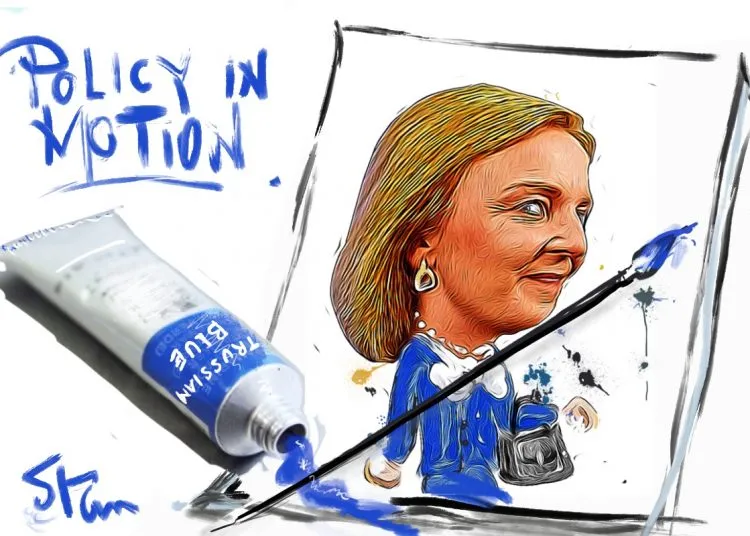 Break the rules, lie about it, get caught lying, change your story, double down – as PM, Truss looks likely to follow in Johnson’s footsteps, writes Bremain Chair Sue Wilson MBE for Yorkshire Bylines.

It’ll be no surprise to anyone following the trajectory of Liz Truss’s career – or to anyone trying to avoid it – that Truss used to be a Remainer. In the run up to the Brexit referendum in 2016, Truss was an ardent, and very visible, pro-EU campaigner. She would now have us believe that her Brexit position was equivocal and that she was firmly sat ‘on the fence’.

A Brexit point to prove

Truss may have started out as a Remainer, but she is demonstrating the zeal of a true convert. At a recent hustings in the leadership race, Truss claimed that she only supported Remain because she was “concerned about some of the disruption”. She has now changed her mind, she insists, as “that disruption didn’t happen”. That’ll be news to businesses, economists, farmers, fishermen and tourists alike, not least those stuck for hours at Dover.

It seems that, in order to prove the strongest Brexit credentials – as required by any Tory prime minister – you need to follow the Boris Johnson playbook. All that is required is to don the Brexit blindfold, be able to U-turn on a sixpence, and lie through your teeth.

Liz Truss says there was no disruption when leaving the EU.

Farming, fishing, music, trade, chaos at Dover, and a 4% drop in GDP all due to Brexit, all disagree. pic.twitter.com/WEtQxuhDha

Rishi Sunak, the only remaining competitor for the top job, has been keen to point out Truss’s former position on Brexit. Claiming himself to be the only true Brexit believer, he recently said Truss’s “true Remainer colours” were starting to show.

A spokesperson for Sunak’s campaign said that Truss, “blames Brexit and fails to see the opportunities from it to help farmers and food production”. Sunak also drew attention to the fact that Truss neglected to mention it was her own trade deals causing many of the problems British farmers are facing. But never fear, Truss swears she will “back our farmers” as they should be “getting on with farming, not having to fill in forms”.

Truss has also pledged to expand the visa scheme to allow more seasonal workers to pick fruit and vegetables. “I know it’s difficult for farmers at the moment”, she said, without any recognition of her part in their current difficulties.

💬 "I will back our farmers. I want our farmers producing food. We know how difficult the global situation is. We need food security."

An ability to abandon a proposed policy at the drop of a hat has long been a feature of recent Conservative prime ministers. If Theresa May was the ‘flip-flop’ queen, then Johnson was the U-turn king. Any policy proposal that failed to receive the required adulation, or that immediately provoked a bad public reaction, must be dropped immediately.

But it’s one thing to have a change of heart following public pressure; quite another to claim that the proposed offensive policy was never your policy in the first place.

You might expect that a leader, or even a potential leader, would have any proposal properly researched and assessed before launch. Not in Truss’s case. In fact, not only was her proposal – that public sector pay be reduced outside of London – cancelled within 24 hours, but she claimed it was never her policy in the first place. Her policy had been “wilfully misrepresented” and she had “never had any intention of changing the terms and conditions of teachers and nurses”, despite what was said in the previous day’s press release. Johnson, if he could be bothered to take notice, would be very proud.

Levelling Down Liz is stuck on repeat.

If in doubt, double-down

A leaked email has this week seen Truss facing allegations of failing to declare thousands of pounds spent on ‘schmoozing’ fellow Tory MPs.

A champagne dinner labelled ‘Fizz with Liz’ was held at an exclusive London club last year. Although the event was paid for by the club owner, the function should have been declared in the Commons register. Seen as an early bid to succeed Johnson, Truss was described as being “on manoeuvres”. Truss denied any responsibility in organising the event, claiming she was merely one of the guests. That’s despite having sent out invitations personally by email.

If you aren’t starting to recognise a pattern here – break the rules, lie about it, get caught lying, change your story – then you haven’t been paying attention.

* Get caught breaking the rules
* Lie about it
* Get caught lying about it
* Change your story several times
Sounds awfully familiar, doesn't it?https://t.co/AEStrXZO5t

The decision on who will be the next prime minister is being made by just 160,000 Tory party members. That membership is predominantly over 60, white and male, with many seemingly holding similarly right-wing views to the influential ERG group. The grandstanding displayed by both contestants is clearly aimed at these audiences alone. Never mind what the country might want or desperately need.

At the moment, Truss is the favourite. The sheer number of ministers and MPs now throwing their support behind her is clear evidence of who the party expects to win. It’s not just the candidates whose opinions and policies are disposable. Anything goes if the reward is a Cabinet post, it seems.

Of the many terrible legacies that Johnson leaves behind, Truss appears determined to repeat his mistakes, only with bigger bells, whistles and lies. Whatever vandalism has been committed by Johnson on the British state and the British public, Truss will try to outdo it.

Johnson broke Britain. He destroyed our reputation abroad, collapsed the economy, caused untold deaths, destroyed our democracy and all while expecting to be applauded for it. Truss has the ambition, and a willingness to sink to new depths of destruction in order to gain power. It looks likely she’ll succeed in her goal, too. But that’s all there is. She has no charisma, no policies founded on anything like need, intelligence or honesty, and she’s easily led.

The ERG are going to have a field day with their latest puppet. Labour, meanwhile, can’t believe their luck. Johnson has hung on just long enough to beat May’s record in office – she made it three years and 12 days; coincidentally Johnson has been in office for three years and 12 days today. Truss, if she succeeds, seems destined to serve less time than either of them.

Truss aims to boldly go where Johnson has been before