Harry and Meghan haters: time to face facts, you are being played 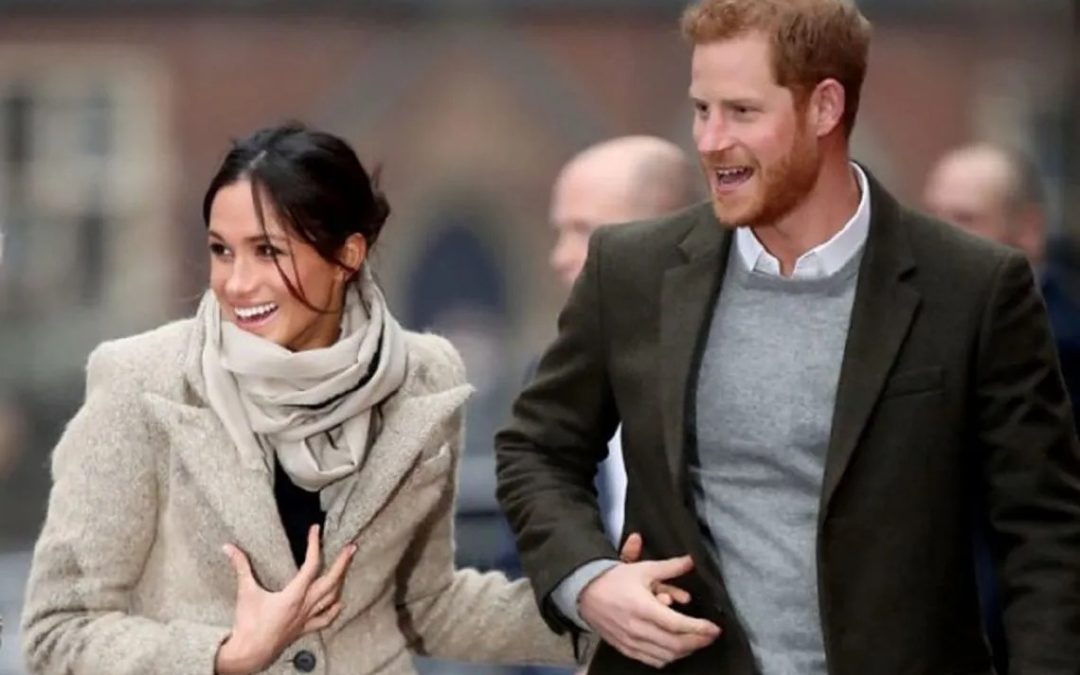 For years right-wing tabloids have poured false poison and vitriol over anyone that dares challenge them, now the Sussexes are fighting back, writes Bremain Vice Chair Lisa Burton.

No one likes to think our convictions are manipulated by what we read and see in our news and social media. Yet they are, and for Harry and Meghan, that manipulation has led to an unprecedented scale of bullying and abuse.

I’m relatively sure you read those words and didn’t think they related to Harry because these are tropes people regularly used to speak about women who put their heads above the parapet and use their voices to speak out or don’t fit a particular ideal. These are some of the milder words used to describe Meghan Markle.

The press intrusion on Harry’s life and that of his mother, Princess Diana, has undoubtedly scarred him, but his abuse is not on the same scale. Meghan is played as the villain in the story even though every decision they made, they have made together.

The tabloids rule by intimidation. They can bring down anyone who doesn’t play their game, including the Royal family.

We can all have an opinion of a celebrity’s character even though we don’t know them, and we must all admit it comes from what we read and see. Companies and governments would not spend millions on advertising and messaging if it didn’t. However, the depth of anger, rage, and negative emotion people genuinely feel and project about Meghan is visceral and deeply personal. What terrible crime has she committed?

Diana shared her similar experience with the Royal family in print and interviews, yet remained the People’s Princess. Prince Andrew embarked on a car crash interview about his relationship with a proven paedophile Jeffrey Epstein. His Pizza Express alibi and reasoning that his accuser Virginia Guthrie must be lying about their relationship because, at the time, he “couldn’t sweat” didn’t bring a wave of tabloid furore or 20 pages of coverage. Many just laughed. And let’s not forget Prince Charles and Camilla’s ‘tampon gate’ scandal`. The Royals are not new to humiliation and shame.

So weird. When #PrincessDiana criticized the royals ad nauseam, she became the world’s favorite woman. Now that #MeghanMarkIe does it, everyone hates her? Gee. I wonder what the difference is between the two.

Whatever your feelings of Harry and Meghan, I think it’s important to remember that Prince Andrew paid a woman £12 million pounds to stop calling him a nonce.

The tabloids and anti-Meghan commentators feed the narrative of the couple craving attention while expressing the view that it is felt by many, ‘Why don’t they shut up and go away’ or ‘they are profiteering off their royalty’. The day after the first Netflix release of Harry and Meghan, where the couple called out the wilful bias and lies of the tabloids, the Daily Mail responded with over 20 pages of negative coverage of the couple. They were very proud, stating, “Our unrivaled coverage of the Sussexes ‘Megflix’ bombshells accumulated more than 60,000 comments in hours”.

It’s a vicious cycle. People complain about them constantly being in the limelight while consuming mass articles and commentary, thus propelling the media to publish more and more.

After Harry and Meghan’s interview with Oprah Winfrey last year, Meghan did not show herself for 250 days. The media during those days wrote thousands of articles about her. On the first day, The Express alone reported over 50. The tabloids have been cashing in on their lives for years with lies, conjecture and bias. They would keep the couple in the limelight, documentary or not, because there is money in doing so. Now that Harry and Meghan are making money from producing and telling their own story, it is an entirely different matter. How dare they.

Besides the fact that hate sells, why would the tabloids want to destroy Meghan and Harry?

The UK’s tabloids presume that no one, not even the royals, would dare to stand up to them because they have the power to take anyone down. The Sussexes have broken the unspoken contract between the Royals and the tabloids. Harry and Meghan have successfully sued several, and Harry is now part of a new, major legal challenge.

Law firm Hamlins say that the group have “compelling and highly distressing evidence” they have been “victims of abhorrent criminal activity”. Including phone hacking.

In the past, Associated Newspapers have been sued for similar activity by Prince Harry, in whose favour a judge ruled in July. He also accepted an apology and substantial damages from the publisher over false claims in 2021 that he snubbed the Royal Marines after stepping down as a senior royal. The tabloids are angry and want to ensure we are angry on their behalf.

Delivering a speech at the annual Levenson Lecture on press reform, organised by group ‘Hacked Off’, to whom Hugh Grant is associated, Labour MP Chris Bryant said, “This is not normal spontaneous or altruistic hatred … It’s not journalism. It’s a perversion of journalism, and it means, once again, that the press sees people’s lives as a commodity to be traded”.

Shocked. But not surprised.

In October of 2021, a media report from Bot Sentinel, a Twitter analytics service, began analysing the online hate towards Markle, focusing on Twitter.

Of the hateful posts on Meghan Markle that were examined, 70% came from just 83 accounts. The tweets’ estimated reach was 17 million Twitter users. A “bot network then bolstered these tweets” – hundreds of inauthentic Twitter accounts that amplified the hate and conspiracy. Nine out of ten prominent Twitter accounts of Royal commentators and those who primarily cover the royal family had interacted with at least one of the 84 hate accounts, some containing death threats.

Bot Sentinel followed up with two further reports revealing the activity also spread to monetised YouTube accounts. One channel focusing on anti-Meghan Markle content has reported ties to Markle’s estranged half sister, Samantha Markle. It created a network with two other anti-Meghan channels. These three YouTube channels alone have over 70 million views combined and $495,730 in total YouTube earnings.

Kate vs Meghan – One can do no wrong, the other no right

For years Meghan has been shamed and attacked for the same things for which her sister-in-law, Kate, has been praised. Even if you don’t read or see these tabloid and online headlines, you can be assured others you know do, feeding the cycle of deliberate media gaslighting.

This article compares 20 incidents where hypocrisy shown towards Meghan cannot be ignored. Here are a few examples. 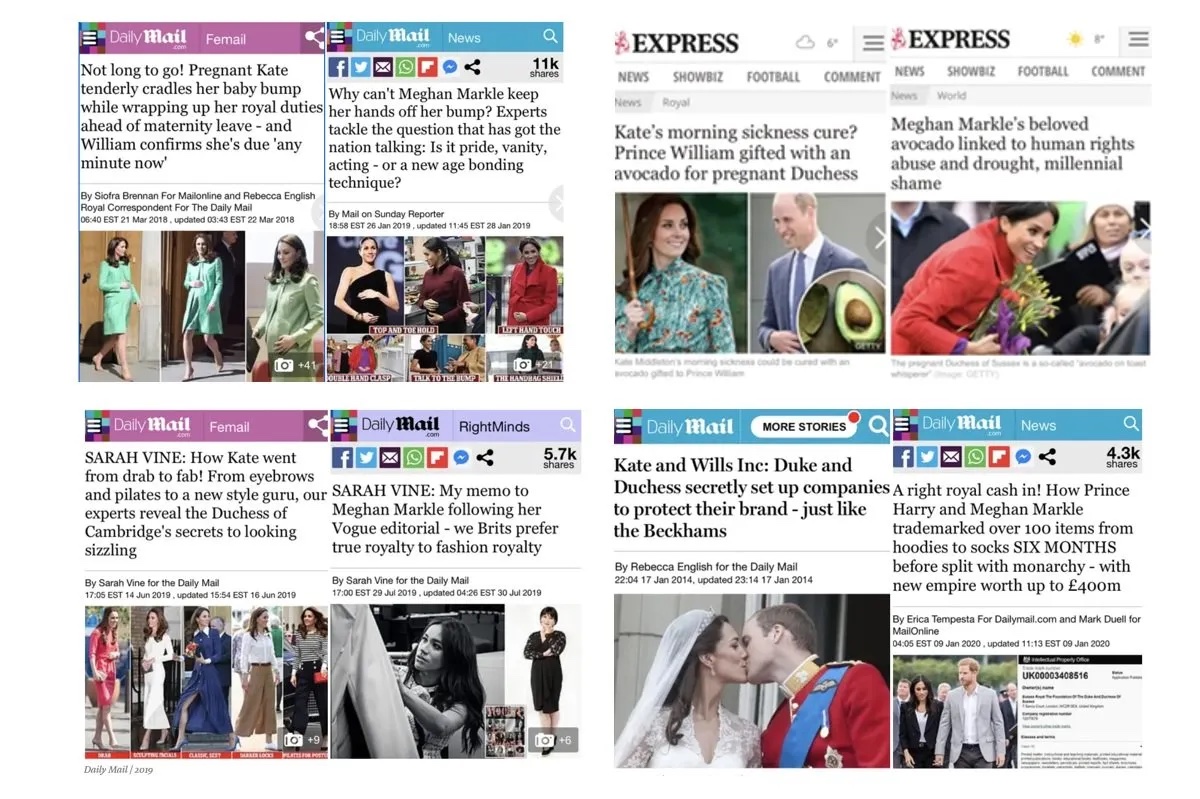 A review of thousands of articles from the 16 years since Prince William and Kate’s relationship became public, shows that constant abuse and harassment from the press gave way to praise once Meghan Markle became a royal.

The royal press office, which can try to kill false or misleading reports, has defended Kate far more than Meghan. One couple is protected because they play the game. The other was thrown to a nation full of wolves with an insatiable taste for red meat and feeding frenzies. The palace press core is also known to ‘swap out’ stories, meaning they will contact the palace with an account; if the palace doesn’t want that story run, they are expected to provide another. Seemingly, Harry and Meghan were prime fodder.

“I was told, because I’m quite critical of the monarchy in many ways, I was told that I could say what I want about #HarryAndMeghan, but I had to lay off of William and Kate. That was the instruction from the editor.”

This article only focuses on media manipulation and has not touched on the profoundly complex issues of race, racism and Empire that play into this story. However, there lies in the UK an almost enforced reverence and respect towards the monarchy. To criticise or speak out about them is deemed by many as treasonous. We saw examples of this around the Queen’s funeral, where people were denied the right to free speech. Republicans were arrested for silently holding signs saying ‘not my King.’

Police in Parliament Square threatening to arrest a protester carrying a blank sign if he writes ‘Not my King’ on it as an offence under the Public Order Act. Doesn’t matter where your politics lie, this should alarm you. It’s a peaceful protest. No arrests made for “My King” https://t.co/Vdt5wW4NLF

Both Harry and Meghan committed to humanitarian causes long before they met. Meghan in 2017 was a global ambassador for World Vision, an advocate for UN Women, and an incredible advocate for gender equality. Together they have committed to mental health charities and fighting racial injustice. It is their career, so why should they not have a chance to tell their side of the story, their truth, considering all these elements exist within it?

Let’s all be honest. The couple could give up every title and move to the ends of the earth, but we all know deep down that nothing they do would stop the media from stalking them and manufacturing stories to sell their bile-filled pages. They are far too profitable.

Every word and action in the documentary will be picked over and analysed to find an element of rage, anywhere, to prove everything you have read is true. So, maybe try putting aside what you have been told to believe and watch the documentary. You may find the main villain is not the Royals themselves but the repulsive system that exists between them and the tabloids. One that must be maintained to ensure the Royals stay in public favour.

Finally, actual analysis from @guardian: “Harry & Meghan have done more reputational damage [to British newspapers] in this Netflix global event than in any single lawsuit” — & the near psychotic press reaction only cements it. https://t.co/2bfFVL8Up6

Open your mind and heart, and you may hear the love story of a young couple battling against all odds. Against threats to their mental health, against tradition, against expectations, and against a system that is doing everything to destroy them.

If you don’t, at least you have more information than the unchecked bias that has saturated the public domain for years but ask yourself, what is your desired outcome? Some won’t be happy until the couple is hounded to the point of separation or divorce, or one of them is dead, proving once and for all that Meghan was a terrible person, unfit to be a Royal. Would you be one of them?