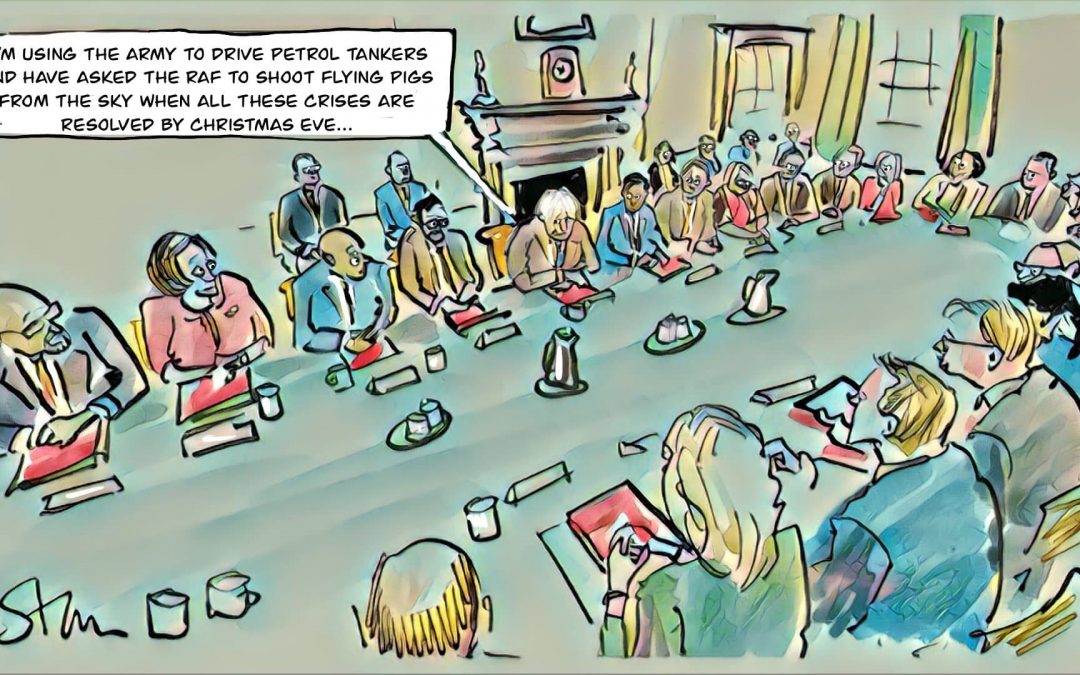 Ministers are keen to stress there is no fuel shortage and therefore no fuel crisis, just no actual fuel at the pumps, writes Bremain Chair Sue Wilson MBE for Yorkshire Bylines.Unless you have been asleep at the wheel, you might have noticed a slight problem with fuel supplies at British petrol stations. You may even have noticed a queue of cars waiting to fill up, and perhaps even causing minor traffic problems. But have no fear, there’s no need to panic, according to the prime minister, as there is no fuel shortage. Or, as Nadine Dorries, newly promoted DCMS minister put it, “THERE IS NO FUEL SHORTAGE!”

There is no fuel shortage.

THERE IS NO FUEL SHORTAGE!!

No fuel shortage – just no fuel at the pumps

Dorries was not alone, however. Other ministers were also keen to make the exact same point, even if the number of exclamation points used or the use of shouty capital letters varied. These included James Cleverly – the most inappropriately named minister in Westminster – and Grant Shapps.

The transport secretary told the BBC’s Andrew Marr that – and this is going to come as a surprise – there is “no shortage of fuel”, and people should be “sensible” and only fill up when they need to. This from the same transport minister that told us, just a few days ago, that Brexit was not the cause of the lorry driver shortage, but the solution to all of our supply chain issues. 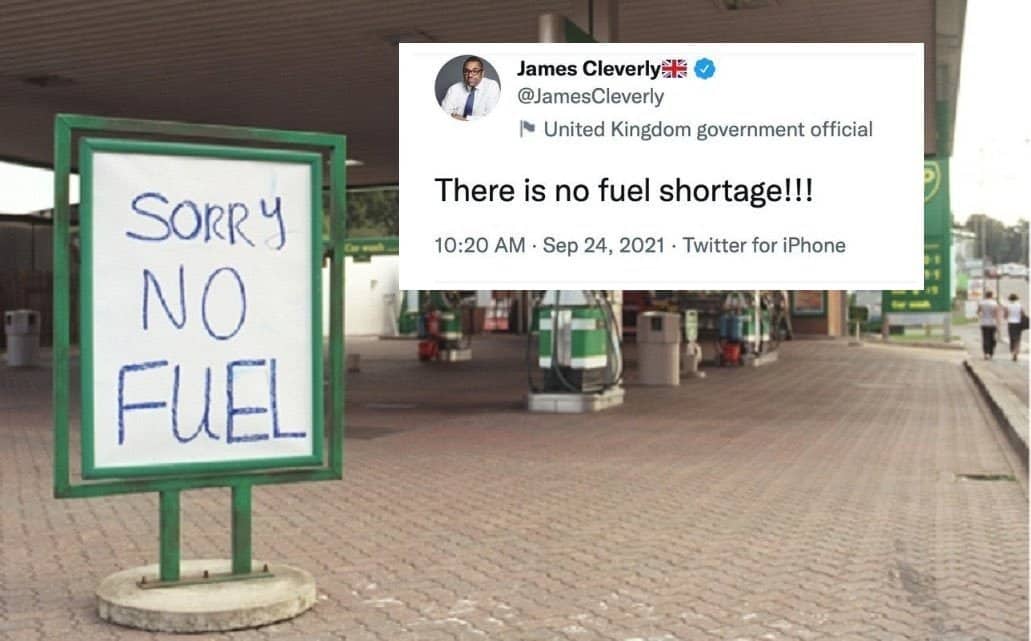 While it may be the case that there is no UK-wide shortage of petrol and diesel, there is clearly a shortage of fuel where it matters – at the petrol pumps. Social media – which has been critical of government messaging on the subject – has been filled with photos of closed petrol pumps, and even a few closed petrol stations. Even the mainstream media has been on the case.

Prime Minister Boris Johnson is not exactly known for being proactive, or for saying or doing the right thing at the right time. Johnson’s recent suggestion that the British public do not panic buy, has only fuelled – no pun intended – the exact actions he presumably hoped to avoid.

The fact that the government is claiming there’s no fuel crisis is par for the course, in the same way they act as though covid is all over, and Brexit never caused anyone, any industry, anywhere, any harm at all.

The Brexit denial extends to the damaging shortage of qualified HGV drivers, which the government insists is a global issue. Of course, the government’s understanding of the word ‘global’ – as in Global Britain – is well known, and not one shared by the international community.

Whether it accepts the real reasons for the lorry driver shortage – a combination of elements including covid and, most definitely Brexit – the government’s proposed solutions seem destined to fail. With a shortage of around 100,000 drivers, the issuing of 5,000 temporary visas seem ridiculous even by the government’s own standards.

But, to give the government its due, the temporary visas are not the only (daft) trick up its sleeve. It is also sending out one million letters to retired/ex HGV drivers in the hope of tempting them back, to save Christmas.

Just why an EU-based lorry driver would be interested in applying for a temporary visa is a question the government has failed to ask. The conditions in Europe are better, there are no border issues to contend with, and they are treated with considerably more respect.

That’s without the appalling Go Home Office toxic immigration policies, and treatment. Or the memories of all those poor EU drivers stuck in the UK last winter, unable to get home to their families for Christmas. Throwing more money at the problem – a typical Conservative Party approach to many a problem – is not the answer.

Where’s the planning in all this?

Labour leader Keir Starmer said the situation showed “a complete lack of planning” by the government. With regard to the 5,000 temporary visas, he said, “We have to issue enough visas to cover the number of drivers that we need”. But the British Chamber of Commerce said it best, describing the measures as “throwing a thimble of water on a bonfire”.

Planning has never been this government’s strong point. Even when there has been a plan, it’s been lacking in detail, or secret, but reactive and late. We haven’t even felt the full force of Brexit restrictions yet, as the government is, as always, not ready. Fuel crisis, what crisis? THERE IS NO CRISIS!!!