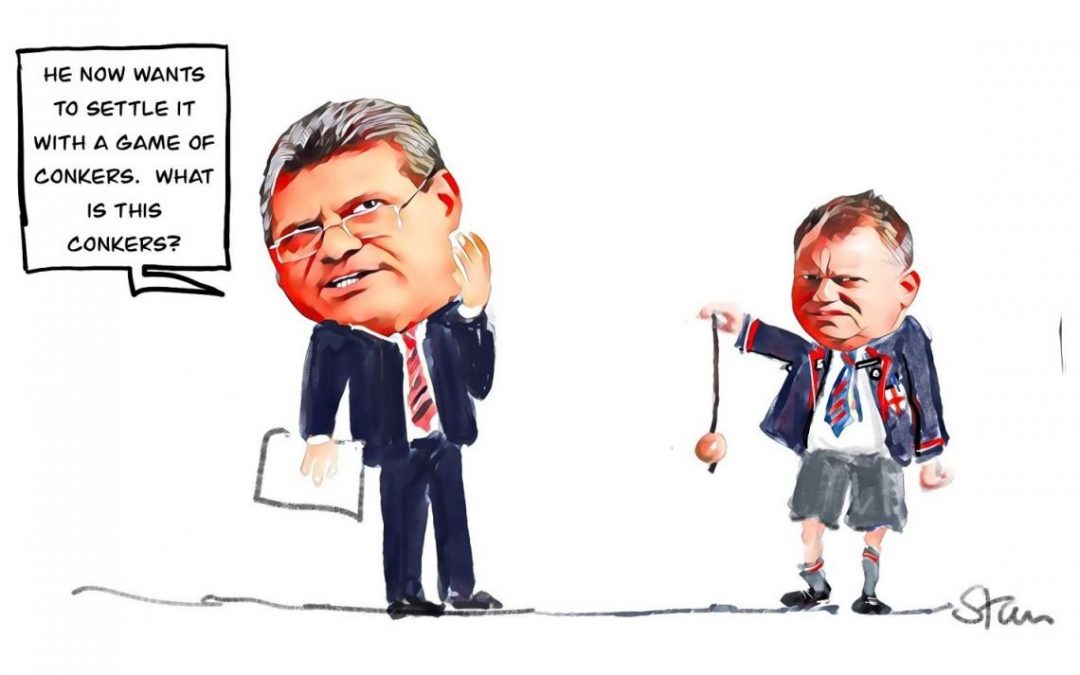 Lord David Frost, former Brexit negotiator, is having another tantrum. It seems he is not taking criticism of his recent speech well, writes Bremain Chair Sue Wilson MBE for Yorkshire Bylines.

Lord David Frost, former Brexit negotiator, is having a bit of a tantrum. Yes, another one. It seems he is not taking criticism of his recent speech well, accusing critics of not having read the speech first. The Churchill lecture was given at the EuropaInstitut at the University of Zurich on 15 March. I’m sorry to report that I have read more than enough of it, so at least you don’t have to.

According to the Spectator, Frost set out a potential basis for future relations between the UK and the EU in a “warm” tone. His comments mark a “deliberate attempt to move on from scratchy relations of the last few years”, while failing, naturally, to accept any responsibility for how his own bombastic, truculent style affected EU/UK relations. For good measure, and without a hint of irony, Frost argued there is a “need to recognise that the EU is a natural ally”, adding that the UK and EU should “seek – as sovereign equals – ways to cooperate and work together more”.

The threat of triggering Article 16 – effectively suspending the Northern Ireland protocol – was one often bandied about by Frost, and by the prime minister. They have each claimed, on occasion, that the protocol has caused “serious economic, societal or environmental difficulties”. In doing so, they say, it has reached the necessary threshold to ‘justify’ triggering Article 16.

Maroš Šefčovič, vice president of the European Commission, described these threats as “enormously disruptive” and could result in “very serious consequences”. Increasingly, however, the EU politely dismissed them merely as empty threats.

Fast forward to his speech and Frost half-heartedly suggests the threat be taken off the table. Not without a quid pro quo though. In exchange for not throwing our toys out of the pram (again), Frost demands the EU accept the need for a fundamental renegotiation of the protocol. Should the EU fail to accept a renegotiation – something they have adamantly and repeatedly rejected – then surprise, surprise, we’re back to invoking Article 16. After all, according to Frost, the protocol was “always temporary” and it was “not realistic” to expect the border in the Irish Sea to last forever.

I would appreciate it if those commenting would actually read my speech tonight before doing so.

The message is not that of this headline.

Incidentally, "Tory public schoolboys", however unwelcome their existence may be to some, are still allowed to have a view on things. https://t.co/4X59U71Kdb

Or, to put it another way, as the Telegraph did, the “Tories should pledge to tear up the Northern Ireland protocol unless EU backs down”. It seems though, that Frost’s message was “not that of this headline”, according to his tweet.

Also, he’s a bit touchy about being referred to as one of those “Tory public schoolboys”. Duly noted

In a Twitter thread, Professor Steve Peers points out a number of false statements (lies) made by Frost in his speech. Frost claimed the protocol was “imposed on us” – a rather different picture from the one painted at the time of his signing the deal. So much for that glorified “oven-ready deal” sold to the country, which parliament voted for and Conservatives applauded.

Frost also suggested that Theresa May’s government was only interested in a “simulacrum of leaving”, which was clearly untrue. May had, from very early on, taken the single market and freedom of movement off the negotiating table, thanks to her obsession with immigration. But even May’s Brexit had not been hard enough for Johnson or Frost.

Peers acknowledges Frost’s positive suggestions on how the deal could be improved, such as youth mobility and cooperation on foreign and defence policy. However, this would involve the reversal of policies that Frost himself had negotiated, and, says Peers, “frankly, this calls his judgement into question”.

I've read the speech. @hayward_katy's critique is justified; the Telegraph headline is fair; and the speech is profoundly intellectually dishonest. Let's have a closer look. 1/ https://t.co/eTrPAUxqdI

Peers also disagrees with Frost about the accuracy of the Telegraph headline, describing it as a “fair” interpretation. The speech, however, he described as “intellectually dishonest” – a description that could equally be levelled at the Tory public schoolboy.

Frost, you so often try to give the impression that the #NIProtocol’s content is not your doing and an unwelcome surprise. It is an international treaty. You negotiated it. You knew its implications. Or if you didn’t, then you were and are unfit for high office.

When Brexit was ‘done’, Frost signed an international, legally binding agreement that he never read, never understood, or never had any intention of implementing. He was given a Cabinet role by Johnson and elevated to the House of Lords, before resigning in a fit of pique when the EU exposed the weakness of his arguments. If he ever understood the way the EU works, negotiates, or protects its values, he has a strange way of showing it.

With every speech, including those made to parliament, Frost has never lost his ability to distort Brexit reality. Despite having negotiated a hard Brexit deal, including the protocol he now hates, his own deal was never extreme enough for his own liking.

I’ve had quite enough of Frost, and Tory public schoolboys, to last me a lifetime. Johnson and Frost have damaged our economy, our reputation and the democracy they falsely claimed to prize. You’ll have to read the next Frost speech yourselves, as I won’t be bothering. I know what he will say. The same as he always does – trumped up nonsense divorced from reality. Just like Brexit.

I would appreciate it if those commenting would actually read my speech tonight before doing so.

The message is not that of this headline.

Incidentally, "Tory public schoolboys", however unwelcome their existence may be to some, are still allowed to have a view on things. https://t.co/4X59U71Kdb