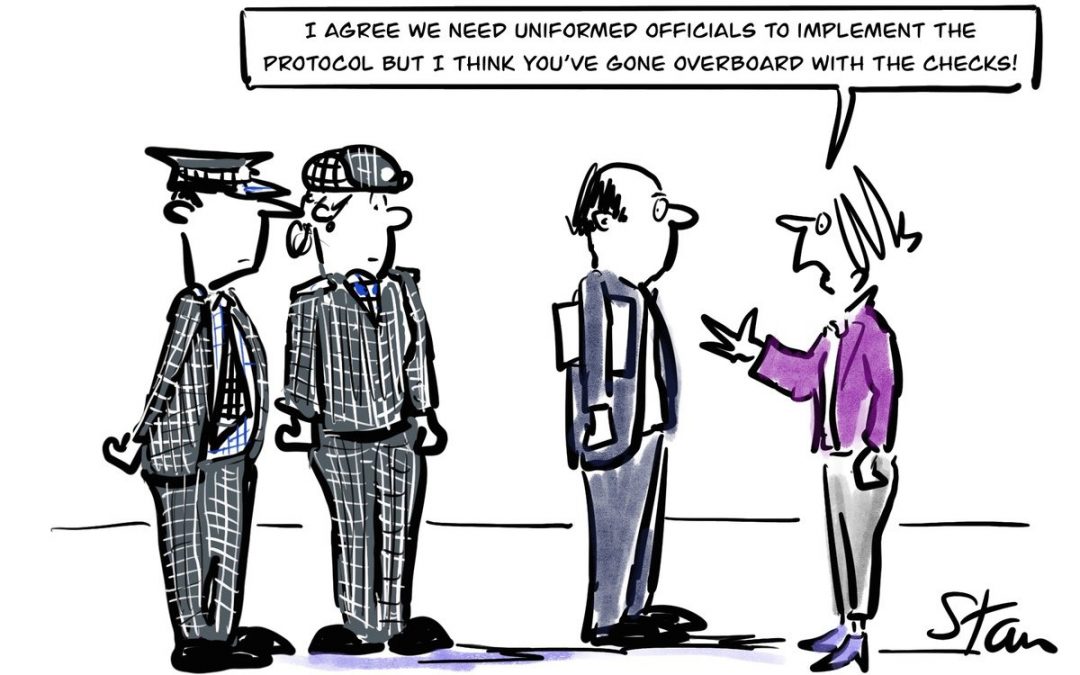 Over the last few days, rumours have been rife as to the UK’s plans to resolve issues surrounding the Northern Ireland protocol. Rhetoric from Lord Frost – the UK’s Brexit negotiator – has been ramping up over recent weeks.

Would the new proposal – the ‘command plan’ – be more constructive, or just more UK government sabre-rattling?

At the beginning of the month, Frost described the truce between the EU and the UK, in the so-called ‘sausage wars’, as merely a “sticking plaster”. As a direct response, relations with the EU were said to be deteriorating, following Frost’s “strange” remarks, with European Commission vice president, Maroš Šefčovič, warning that the EU may step up plans for legal action against the UK.

The government’s denial of responsibility for the consequences of Brexit is not new. Frost in particular has washed his hands of any blame for the failings of his own – once touted – Brexit deal. That blame is being laid firmly at the EU’s door, with claims of EU inflexibility and purism.

Not one to be left out of any EU Brexit bashing, Prime Minister Johnson joined in the blame game attacking the EU over the Northern Ireland protocol, and providing a committee of ministers with a list of the issues. Not quite the ‘oven ready’ deal that he persuaded parliament to support, it would seem.

By the second week of July, Frost was promising answers on the Northern Ireland protocol before summer recess, accusing the EU of dodging the “heart of the problem” in post-Brexit trade.

Pump up the volume

Prior to Wednesday’s big announcement, the scene was being set with Frost talking of deviating from the Brexit deal and “pumping up the volume”. The expectation was that the UK would invoke Article 16 of the protocol, which allows either party to take unilateral action if the application of the protocol “leads to serious economic, societal or environmental difficulties that are liable to persist”. 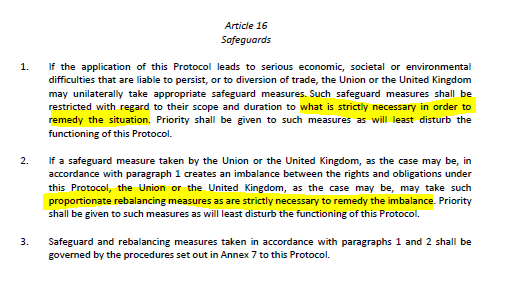 By Wednesday morning, more supposed details of the government’s command plan were beginning to emerge. In a conversation between Boris Johnson and Irish Taoiseach, Michael Martin on Tuesday evening, Johnson said the Northern Ireland protocol was “causing significant disruption”, according to a Downing Street spokesperson.

Johnson called on the EU to “address the serious issues that have arisen” with Brexit in Northern Ireland. Sources described the proposal as “meaningful” and “a significant piece of work”, saying the move to eliminate border checks represented a “wholesale change of approach”. It was also anticipated that alongside the plan would be a threat – to suspend the Northern Ireland protocol altogether.

It's a "significant piece of work," a UK source says

EU is bracing itself for a bold statement. "It probably won't make us happy"https://t.co/z6Gp0eB3zn

Brexit expert David Henig commented in a Twitter thread that any ‘new thinking’ or indeed just ‘thinking’ would be welcome from the UK government”, but added that expectations were “low”.

To be honest 'new thinking' or indeed just 'thinking' would be welcome from the UK government with regard to the Northern Ireland protocol, as compared to the usual shallow analysis, reheated leftovers and empty threats. Expectations low. https://t.co/BYEGI8Y07X

Henig added that the idea of the proposed “honesty box” approach at the border had not been considered by other nations, perhaps because it was a “completely ridiculous” idea. He went on to point out that any mention of Article 16 should come with the warning that any measures taken are both “limited and open to retaliatory measures”

When the plan was finally announced on Wednesday afternoon, it brought no real surprises, other than the government stopping short of the triggering of Article 16. Apparently, “now is not the right moment to do so”. Frost said the proposals would require “significant change to the Northern Ireland protocol” – a step he said the UK would not “shy away” from. That significant change is, no doubt, expected to come only from the EU side of the debate. Frost added:

“The difficulties we have in operating the Northern Ireland protocol are now the main obstacle to building a relationship with the EU”.

Many commentators and onlookers may disagree with that assessment, citing Frost and Johnson as the main barriers to a strong, mutually beneficial partnership between Britain and Europe.

It is clear that the battle between Europe and the UK is set to continue, with the EU having the upper hand and international law on its side

The UK plan will have come as no surprise to the EU, though will likely have caused considerable irritation. The EU, like us, is used to the UK government failing to recognise the realities of Brexit, or indeed of international trade. The government has yet again proved it doesn’t understand the workings, or perhaps even the aims, of the European Union.

I had expected the EU to give the UK government’s latest proposal due consideration, before they said no. As they were bound to. Because they have no choice. It’s a ridiculous plan with no hope of success. But they immediately poured cold water on the idea. Šefčovič said, “we will continue to engage with the UK, also on the suggestions made today. We are ready to continue to seek creative solutions, within the framework of the Protocol, in the interests of all communities in Northern Ireland. However, we will not agree to a renegotiation of the Protocol”.

When asked in the House of Lords on Monday to name the benefits of Brexit, Lord Frost replied:

“Brexit will be hugely in the interests of everybody in this country as we take forward the exciting opportunities to reform our own rules, take back control of our legislation and run our own country as we wish”.

He proved then, as he proved again today, that his Brexit is a fantasy. This isn’t a plan, command or otherwise. It’s sabre-rattling nonsense of the highest order. And the country deserves better.