Denying care to the elderly? Age is just a number 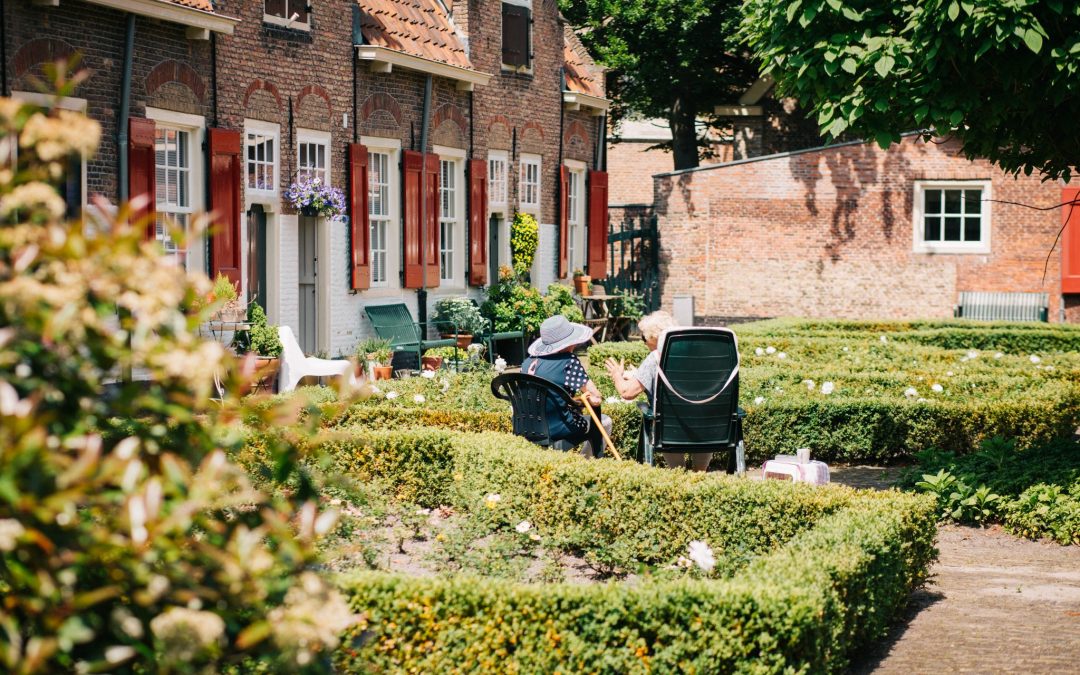 In five weeks’ time, I will celebrate being 68 years old, or young, depending on your outlook, and probably your own age. Brexit and covid aside, I am the happiest, most contented I have ever been in my life, and probably the fittest and most active too, writes Bremain Chair Sue Wilson MBE for Yorkshire Bylines.

Do I enjoy the pastimes expected of your average 67 year old? Probably not, but then who gets to decide what anyone of any age should be doing, wearing or saying?

Age has always been relative. My 90-year-old mother does not regard herself as old. She has an active brain; old people are those with more years on the clock, and less faculties, than she has. This has been the case, in her mind, for the last 40 years. But to me, she is elderly, as she’s the oldest member of our family, and older than me. Similarly, those under 30 would, I’m sure, regard me as old, but they’d probably say the same of those ten years younger than me too. 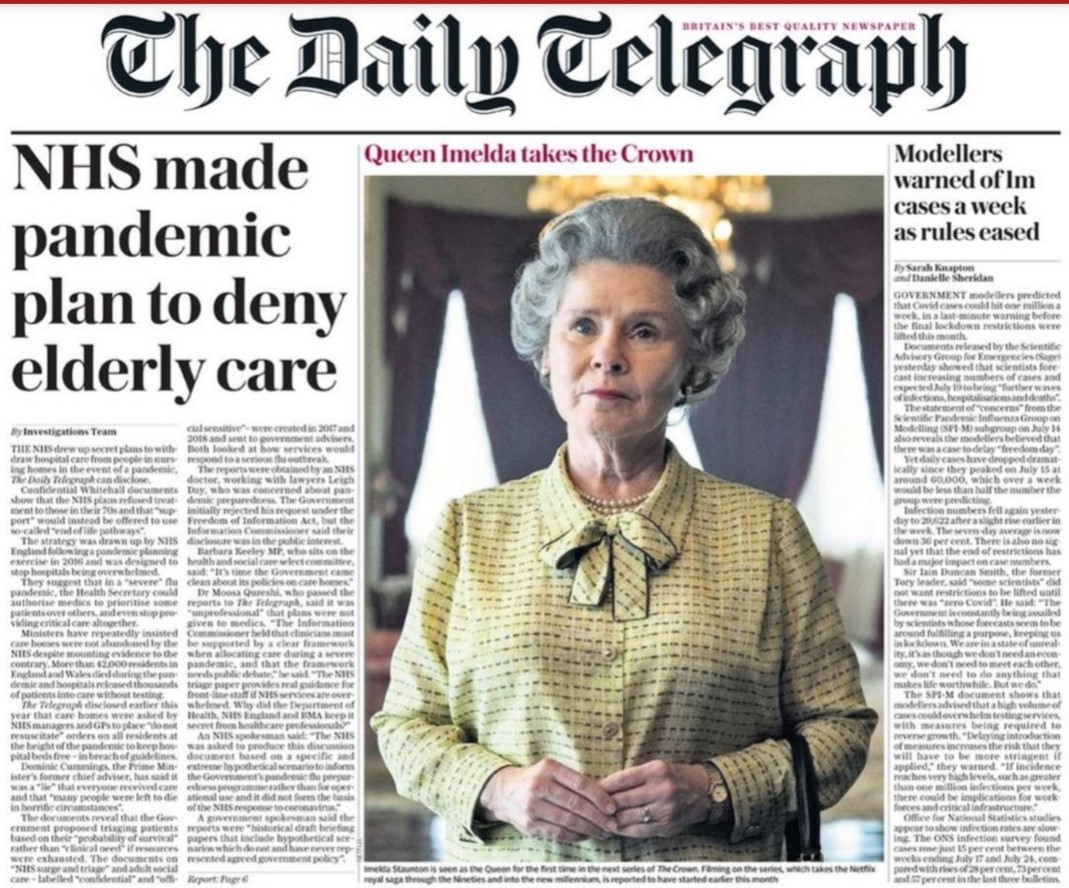 Plan to deny care to the elderly

So, when I read the report last week in The Telegraph, saying that the government had made plans for people in their seventies to have treatment withdrawn in favour of “end of life pathways” in certain circumstances, I was rather taken aback. How could my government – and let’s be clear, this was a government discussion, far more than an NHS one – consider treating me and my peers differently based solely on when I was born?

Although the response from Number 10 was that this proposal “never represented agreed government policy”, it rather begs the question – how close did it come to being policy?

The documents in question relate to government planning for a flu-like pandemic under Exercise Cygnus. According to Dr Moosa Qureshi, who obtained them, these plans were a surprise to medics who were kept in the dark. Dr Qureshi has long campaigned for ‘pandemic transparency’, having recently succeeded, after a lengthy legal battle, in securing the release of government documents.

Two documents relating to the Government's planning for a flu-like pandemic under Exercise Cygnus have finally been disclosed following a long-fought legal challenge by @DrMQureshi who is represented by Tessa Gregory and Carolin Otthttps://t.co/4re1jSgneT pic.twitter.com/FyGo90F5ik

A “scandal of monumental proportions”

The plans referred to in article, suggesting elderly care home residents should be refused hospital care, were created in 2017/2018. They were discussed as proposals for action – or rather lack of it – in the event of a pandemic.

How this played out in practice, with the horror stories from 2020 of elderly hospital patients being sent to care homes without covid testing and without treatment, is still fresh in our memories. Between March and June of 2020, a staggering 28,186 ‘excess deaths’ were recorded in care homes in England alone.

Amnesty International described government decisions, which put tens of thousands of older people’s lives at risk, as “shockingly irresponsible” and a “scandal of monumental proportions”. Amid government failures during the pandemic, older people in care homes had been “abandoned to die”, while 400,000 other care home residents – many extremely vulnerable – had been put at greater risk

Triple lock on pensions under threat

The elderly have always been an easy target, and perhaps a popular one, for any government wishing to save money. Even now, a row is brewing in government over the triple-lock on pensions.

The triple-lock guarantees the state pension will increase each year in line with:

a) the cost of living, as measured by the Consumer Price Index

b) increasing average wages, or

Average earnings are expected to be the highest of the three options by some considerable margin, perhaps as high as 8 percent. 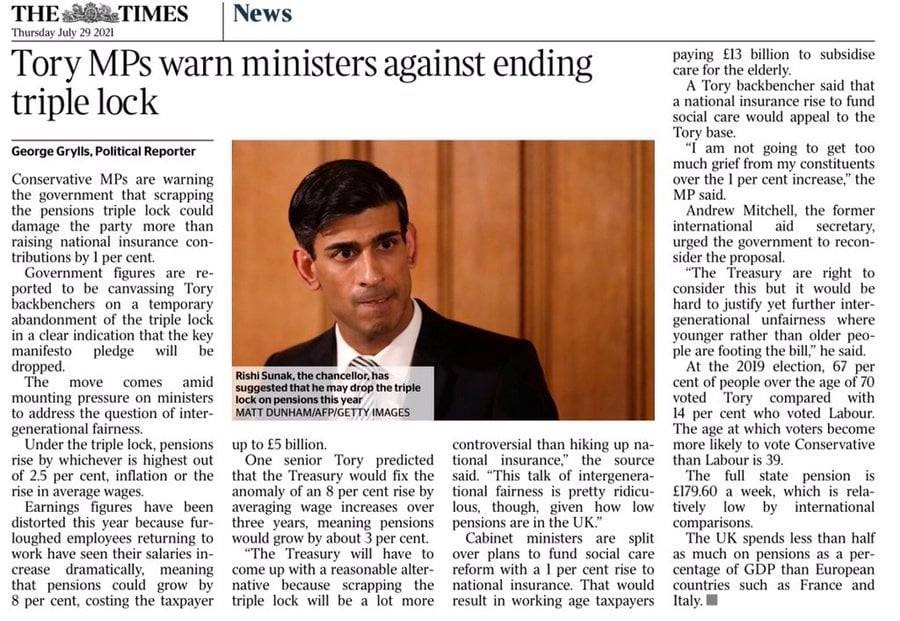 Maintaining the triple lock is a government manifesto promise, but Chancellor Sunak has hinted at its suspension, despite government ministers warning of potential damage to the party. Good to know they are thinking of themselves, rather than the pensioners that would suffer as a result of any cut.

Has the government even looked at the international pension figures lately? The UK is certainly not world beating on the pension front, with one of the lowest rates in Europe

It’s not called National Insurance for nothing

I get that the young have it tough, whether as a result of years of austerity, Brexit, covid or government policy in general. I get that they might believe that anyone of a certain age has had the best years of their life and that the young shouldn’t have to carry the financial burden.

But there are two sides to this. Pensioners are not all wealthy. Those – like myself – living solely on a state pension are living on low incomes, having worked hard for decades to pay for that income. Or at least, that’s what we were led to believe all our working lives.

I always regarded paying my taxes, and especially paying National Insurance contributions, as my paying my dues and funding my future protection. It’s not called National Insurance for nothing, and as with any ‘insurance’ policy, I expect it to come good when it’s needed.

Who gets to decide when my life is considered no longer worth protecting or, indeed, saving? Where do you draw the line? No more care once you’re over 70? 80? 90? What about the disabled, or the mentally ill? There would be uproar (or at least I hope there would be), should the UK government decide that certain people with certain long-term illnesses should have their care removed.

The withdrawal of anyone’s care, for whatever reason, should be entirely the choice of the individual, their families and the medical professionals directly responsible for their treatment. It should not be the responsibility of governments to decide who is too old or too sick to get the care they need or deserve.

Age should not define us

Treating the elderly differently, solely based on their age is the thin end of the wedge. What next? Deny treatment to the overweight, those with unhealthy lifestyles, the drinkers, the smokers?

I might be old enough to be your mum, or your gran, but my age doesn’t define me, or the life that I lead. Whether I choose to take part in activities that would be considered inappropriate for my age is nobody’s business but my own.

Age is so much more than a number. It’s about knowledge, experience, maturity, wisdom and caring less what others think. None of that may matter to the government, but they should think twice before upsetting a growing sector of the population that have largely supported them in the past.

This country has seen enough division over the last five years to last a lifetime. Let’s not add age to the list of topics that divide us.