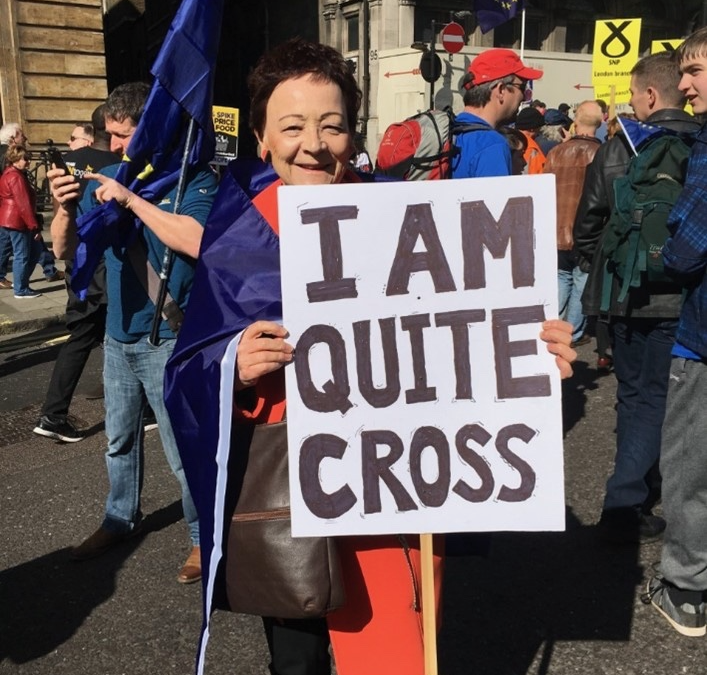 Since 1997, Baroness Sarah Ludford has been a member of the House of Lords and is currently the Liberal Democrat’s Europe and Brexit spokesman.

She was a Member of the European Parliament for London from 1999 to 2014, working mainly on EU security, justice and human rights issues and on EU foreign affairs including as vice-chair of the EP delegation to the US.

A qualified barrister, Sarah has worked in Whitehall, in the European Commission and in the City for Lloyd’s of London and American Express. Sarah was a local councillor for 8 years during the 1990s in the London Borough of Islington.

Is there any justification at all for changing Human Rights legislation in the UK?

Thankfully, one of the few sensible things the Truss government is doing is drop the Bill of Rights Bill which would have gutted the Human Rights Act. However, we cannot lower our guard because the fear is that this right-wing government will simply try to insert into a range of new legislation the horrors that the BORB would have delivered in one place.

There is no justification for substantially changing the Human Rights Act, which has proven its value for nearly a quarter of a century. In particular, it ‘brought rights home’ so that claimants no longer have to make the long and expensive trek to the European Court of Human Rights in Strasbourg (which of course is separate from the EU) to seek to enforce their rights, but can do so in domestic courts.

I thoroughly concur with the views expressed in this letter in June from the Joint Committee on Human Rights, on which I sit.

The Independent Human Rights Act Review led by former Appeal Court judge Sir Peter Gross – ignored by the unlamented Dominic Raab as it largely gave the HRA a clean bill of health – suggested just a few relatively minor reforms, which can be read in the executive summary of their report. Sir Peter also gave evidence a few weeks ago to Parliament’s Joint Committee on Human Rights (on which I sit). Here are the transcript and the recording.

A major recommendation of Sir Peter’s review was to increase ‘public ownership of rights’ through greater public and civic education. I thoroughly endorse this call, as the myth peddled by much of the press that the HRA only assists criminals and illegal immigrants is untrue but highly persuasive and corrosive. As we saw, the rights of people in care homes – not least, their right to life – was a big casualty of the Covid pandemic.

How would you convince me (as a 110% “Rejoiner”) to vote for the Lib Dems in the next election?

Why are the LibDems not supporting the call to rejoin the EU when the majority of the British public now think Brexit was a mistake?

It was good to see you speak at the National Rejoin March. What would you say to those who say it is too early to discuss re-joining the EU?

I am grouping these three questions together as they raise essentially the same ‘Rejoin’ issue. The Liberal Democrats have passed several conference motions post-Brexit, but the latest one was in March 2022 which reaffirmed the party’s support for a longer-term objective of UK membership of the EU.

I think a key paragraph is “Conference therefore recognises that as the UK seek to build a closer partnership with Europe, it must first convince EU member states that the UK is serious about rebuilding the relationship and forging stronger links, which can only be built back gradually over time.” The same applies to public opinion in the UK. The full policy paper which the motion endorses is here.

Given the awful mess Liz Truss has got us into in terms of our EU relationship, seeking to breach the Northern Ireland Protocol unilaterally – and unable even to say whether President Macron is friend or foe! – a gradual ‘road map’ approach simply reflects the political and economic realities.

Had it not been for our September conference having to be cancelled due to the sad death of the Queen, we would have debated (and undoubtedly passed) our first ‘sectoral’ motion deriving from our road map policy, on UK-EU cooperation on foreign and security policy.

I would also draw attention to this excellent Times article (26 September) by Edward Lucas, a senior journalist as well as LibDem parliamentary candidate in City of London and Westminster, on LibDem policy.

So while we do not call for ‘Rejoin Now’ as that is simply impractical, our commitment to the end goal of rejoining is not in any doubt whatsoever, and I shall be speaking at the rescheduled National Rejoin March on 22 October. 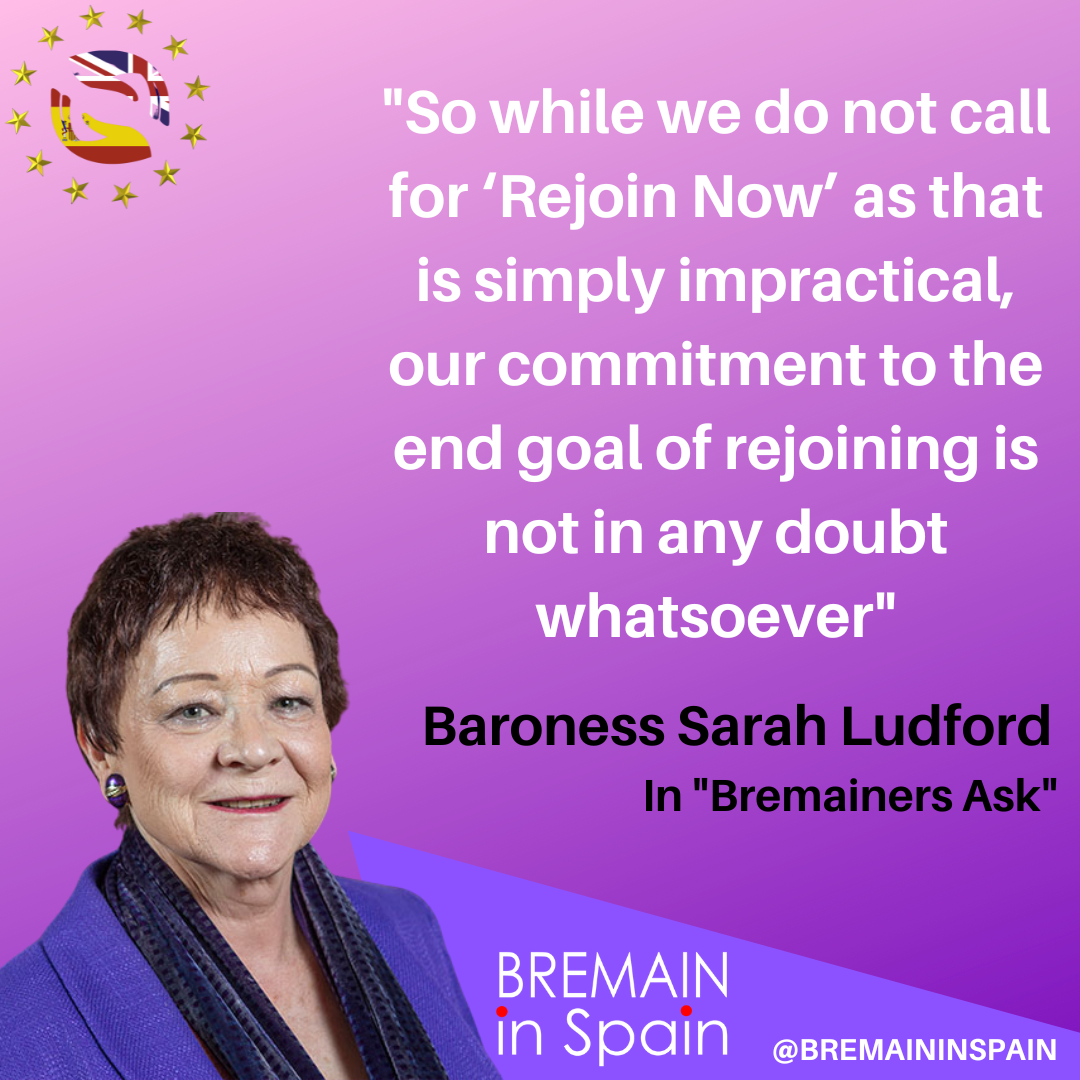 Can the Labour party be persuaded to dispense with the undemocratic first-past-the-post voting system in favour of proportional representation?

The jury is out on whether Labour can be persuaded to abandon FPTP in favour PR. John Harris observed in the Guardian that ‘Polling suggests that 83% of Labour members now support electoral reform. In the build-up to its conference this week, about 140 constituency parties have submitted motions calling for exactly that’ but ‘Unfortunately, Keir Starmer and his allies still see changing our systems of power and politics as an irritating distraction, and are clearly terrified that any conversations about coalitions and partnerships will be a gift to the Tories.’

A conference resolution proposing a new voting system is due to be debated as I write this. The deputy political editor of the Guardian tweeted that she expected it to include ‘Labour must make a commitment to introduce proportional representation for general elections in the next manifesto’ – but we will see!

What, for you personally, has been the worst aspect of Brexit?

We are all losers in a material sense, as imports and exports have become more expensive and burdened by red tape, through the loss of amenities we used to enjoy in the Single Market and Customs Union such as free data roaming, pet passports or EU border channels. I entirely sympathise and seek to support those who have experienced the worst effects, whether businesses ruined, or lives disrupted, by the loss of free movement and having to go through the settlement schemes.

For me, the worst part of Brexit has been an emotional wrench, a kick in the guts. I lost my husband three years ago and so it has been a period of intense grief from all directions.

I first felt ‘European’ nearly 60 years ago, on our family camping trips down through France to Spain, thinking ‘I belong here’. Then as a student I studied European history and current affairs, was an intern (‘stagiaire’) then for seven years an official at the European Commission, and later for 15 years an MEP. So it is a strong part of my identity. I have been able to reclaim my European citizenship by getting my Irish passport; I did not have to apply for citizenship as I am Irish from birth due to my mother having been born in Dublin. (I realise this understandably arouses jealousy, but it’s not from anything I did myself!). As I have no intention of ever moving from London, the main value to me is that it restores that part of my identity that was brutally torn away. I hope by working towards Rejoin to get it back for all Brits. 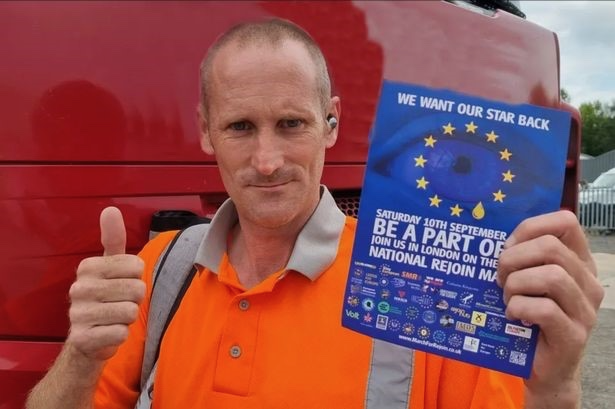 In next month’s newsletter we are delighted to be featuring National Rejoin March founder, Peter Corr.

Peter is a former soldier and lorry driver who lost his job thanks to Brexit and decided to do something rather special to protest about that. Peter is organising the biggest pro-EU, anti-Brexit demonstration and rally for years.

As the march is scheduled for October 22 in London, we are delighted that Peter has agreed to be our next featured campaigner in Bremainers Ask, especially at this very busy time.

Please note that the feature will be published after the march, at the end of October, but your questions will be submitted to Peter before the march takes place, so please bear this in mind when you submit your questions.

If you would like to put a question to Peter, please email us at enquiries@bremaininspain.com no later than Thursday 6 October.