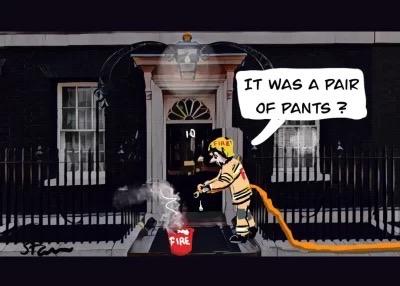 Ever since the partygate scandal first reared its ugly head, Boris Johnson has been dismissing any suggestions that he broke his own Covid laws. Whether giving evidence to the Met Police, Sue Gray or parliament, the prime minister has been keen to deny or deflect, and has attempted to avoid any, if not all, scrutiny. He may have hoped that, with his impending exit from Number 10, his misdeeds would be forgiven, if not forgotten. The forthcoming House of Commons privileges committee inquiry intends to ensure that is not the case and that the truth will out.

The inquiry, which is likely to take several months, will investigate whether or not Johnson lied to parliament. That’s assuming, of course, that the incoming PM doesn’t dismiss the inquiry altogether.

The investigation into whether Johnson misled parliament

The privileges committee – who play a key role in maintaining parliamentary standards and accountability – have been mandated by parliament to investigate the situation. Back in July, the committee published a 39-page report following an earlier call for evidence. The report detailed the “proposed conduct of inquiry” and outlined the committee’s intentions.  They will hear oral evidence – including from Johnson – in the autumn, and have pledged to protect the identities of “anonymous whistle-blowers” who might be unwilling to give evidence if their identities were made public.

Johnson loyalists in both houses of parliament have been questioning the motives of committee members and the legitimacy of the inquiry itself. Unsurprisingly, one of Johnson’s most loyal cabinet supporters – the culture secretary Nadine Dorries – did not hold back. She described the inquiry as a “witch hunt” and the “most egregious abuse of power witnessed in Westminster”. Dorries asserted that the inquiry would cast “serious doubt” on the reputation of the committee members, as well as on the “processes of Parliament and democracy itself”.

The Privileges Committee was asked to investigate this matter by the House of Commons. The committee plays a key role in maintaining standards and accountability in Parliament. The concerted effort we are seeing to try to undermine it is bad for our democracy. https://t.co/nH6zbZOv2q

Zac Goldsmith – who was elevated to the House of Lords by Johnson in 2019, following the loss of his seat in Richmond – has also been keen to defend his political ally. Goldsmith described the inquiry as “an obscene abuse of power” and accused the committee members of being “highly partisan, vengeful and vindictive”. He added that the inquiry was “clearly rigged”.

Foreign Secretary Liz Truss – currently favourite to replace Johnson as PM – drew condemnation when she suggested she would vote to shut down the inquiry, given the opportunity. However, Truss was keen to downplay her comments, saying the inquiry would go ahead.

Truss says she would vote to stop privileges committee inquiry into PM pic.twitter.com/CuZh90WCR0

Not only is Truss proving her willingness to turn a blind eye to government deception but she’s demonstrating her own lack of principles. Lying to parliament while running the country is apparently not a problem, especially perhaps, if your intention is to carry on in the same vein.

Committee member and staunch Brexiter, Sir Bernard Jenkin, was quick to respond to criticism of the committee and the inquiry. Jenkin, one of four Conservative members on the committee of seven, pledged that the inquiry would continue as long as it had the support of parliament. He described the plot to discredit the committee as a “terrorist campaign”. He said that the committee would discharge their duty, and any criticism should be made in writing directly to the committee.

Conservative Sir Bernard Jenkin (who sits on the Privileges Committee) asked about Nadine Dorries’ comments on Boris Johnson inquiry: “If people which to criticise please write to the Committee. Don’t just conduct a sort of terrorist campaign to try and discredit the Committee.”

In response to the comments made by Truss, deputy Labour leader Angela Rayner said Truss was “aiding and abetting” Johnson’s attempts to “dodge scrutiny”. The PM had “created a rotten culture” at the heart of Downing Street, Rayner said, and had “toxified the Tory party from top to bottom”. Not only had Truss enabled Johnson but she would “continue to follow his lead” if she became PM.

Rayner insisted Truss must confirm “in no uncertain terms” that she would not undermine the committee and that she would appoint an ethics chief on day one of her leadership.

We may never fully understand the justification behind the Tory attack on the committee and their inquiry. However, a recent article in the Telegraph may hold a clue. The article confirms that three former Downing Street staffers are set to give evidence to the committee. It is claimed they intend to affirm that Johnson misled parliament and failed to deliver a full account.

Whether their evidence will confirm the wrongdoing of Johnson alone, or of the PM and others, remains to be seen. But perhaps it explains why Johnson’s supporters are so keen to shut the inquiry down.

Thanks to Johnson, the country and the Tory party are now unrecognisable. When in doubt, they use misdirection, lie, blame others, deny. It’s the Johnson way, and his most loyal followers don’t have the capacity or inclination to do any different. If they believe Johnson can be saved then they are as deluded as the PM himself. Some rats, it seems, are too foolish even to leave the ship when it’s sinking.