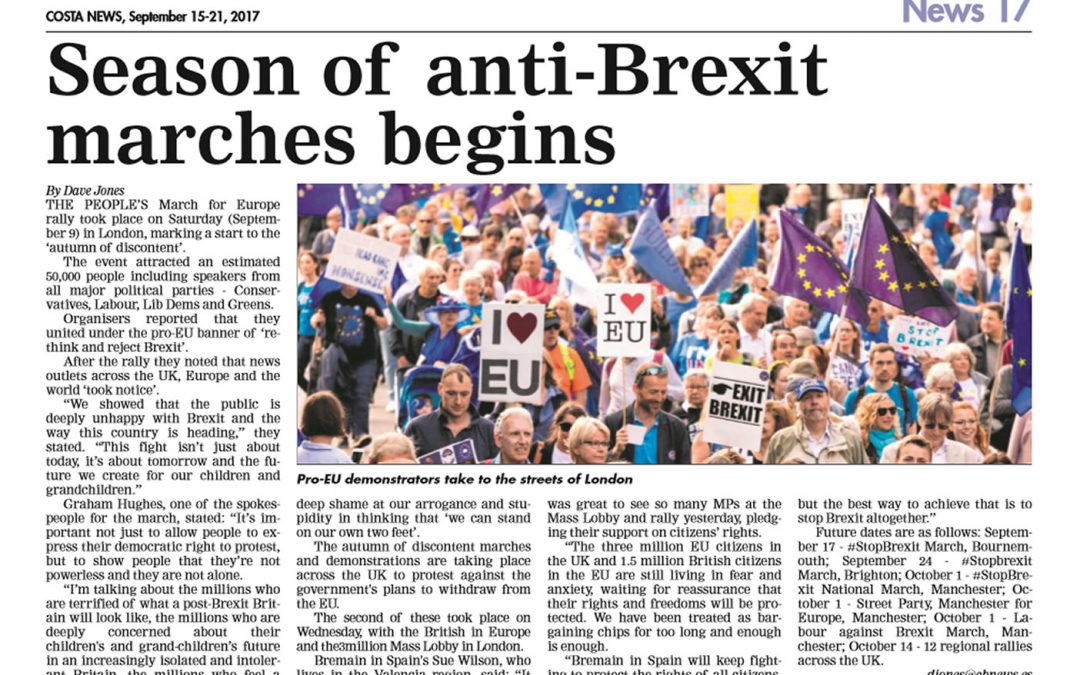 THE PEOPLE’S March for Europe rally took place on Saturday (September 9) in London marking a start to the ‘autumn of discontent’.

The event attracted an estimated 50,000 people including speakers from all major political parties – Conservatives, Labour, Lib Dems and Greens.

Organisers reported that they united under the pro-EU banner of ‘rethink and reject Brexit’.

After the rally they noted that news outlets across the UK, Europe and the world ‘took notice’.

“We showed that the public is deeply unhappy with Brexit and the way this country is heading,” they stated.

“This fight isn’t just about today, it’s about tomorrow and the future we create for our children and grandchildren.”

Graham Hughes, one of the spokespeople for the march stated: “It’s important not just to allow people to express their democratic right to protest, but to show people that they’re not powerless and they are not alone.

As part of the autumn of discontent, marches and demonstrations are taking place across the UK to protest against the government plans to withdraw from the EU.

The second of these took place on Wednesday, with the British in Europe and the3million Mass Lobby also staging a rally in London.

Bremain in Spain’s Sue Wilson, who lives in Valencia, said: “It was great to see so many MPs at the Mass Lobby and rally yesterday, pledging their support on citizens’ rights.

“The three million EU citizens in the UK and 1.5 million British citizens in the EU are still living in fear and anxiety, waiting for reassurance that their rights and freedoms will be protected.

“We have been treated as bargaining chips for too long and enough is enough.

“Bremain in Spain will keep fighting to protect the rights of all citizens, but the best way to achieve that is to stop Brexit altogether.”

The People’s March note that they are ‘a platform and a voice for the many organisations and ordinary citizens that are pro-Remain’.