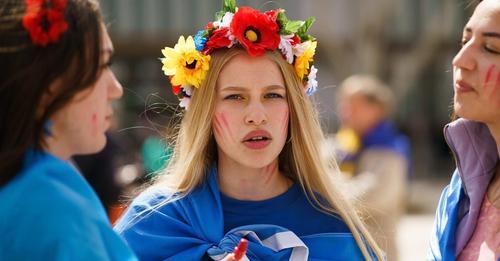 By Sue Wilson in Alcossebre

As Miquel Angel Jauset watched events in Ukraine unfold on his TV he, like so many of us,  felt he must do something to help..

And as Director-General of Kione Resorts, a holiday village in the coastal town of Alcossebre in the Valenciano province of Castellon he came up with an idea that was more ambitious than most.

“I saw how people crossed the border without anything and I saw myself reflected in them”, he explained in an interview last week.

Feeling a “need to go and help”, Miquel Angel launched a campaign crowd-funder to raise money to collect Ukrainian refugees from the Polish border, bring them back to Spain and “offer them the chance to start a new life”.

With the help of his Ukrainian employee, Olena Cherniek, Miquel Angel co-ordinated with volunteers in Valencia, and at the Polish border to set the project in motion.

The original plan was to bring up to 50 refugees back to Alcossebre by coach but the numbers grew and so far over 70 families have relocated with the project. 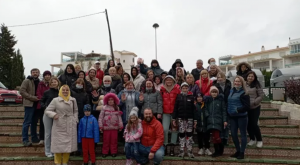 The resort is providing free accommodation for the families on their premises but also helping the families to establish themselves.

Apart from assisting with the necessary paperwork required to allow them to work, they are helping organise health insurance and providing schooling, including Spanish lessons.

The younger children started school a few days ago, the older children will do so after Easter. Some of the adults have already started working, and a few – who preferred not to remain in Alcossebre – have been helped on their onward journey to other European cities.

Help offered to refugees locally has come from a variety of quarters, including the local charity shop – The Friends of Alcossebre.

President, Carolyn Arneill, said it has always been their aim to help the local communities and our new local Ukrainian neighbours are no exception.

For every refugee, the charity is providing a gift voucher that equates to five items per person, per month of clothes, shoes, toys etc.

“We are working closely with the Ayuntamiento to provide assistance in any way we can”, she said.

“We have all seen the news of what is happening every day in Ukraine and we’re happy to be able to help provide support to the Ukrainian families here”.

On Sunday, April 3, a local event that was organised to raise funds for the refugees, attracted a crowd of over 500 locals.

Residents enjoying their 550 portions of paella

Considering the resident population of Alcossebre is just 3,000 people, this was quite a turnout. With 550 portions of paella served from the biggest paella dish I have ever seen, the event raised almost 6,000 euros net profit. All the proceeds will be used to purchase food and basic items for our new Ukrainian neighbours.

Two recipients of Alcossebre hospitality are sisters Marina Demchenko and Alena Tysenko. 36 year-old Marina and 38 year-old Alena began their journey to Alcossebre from their home in Dnipro, 1,000 kilometres east of the Polish border.

Leaving her husband behind, Maria travelled with her five-year-old son, daughter, 13, and her mother-in-law. 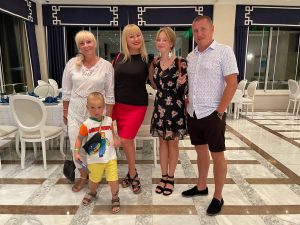 Marina Demchendo and her family

Travelling with them was sister Alena with her eight-year-old daughter.

When they set out, they had no idea where they were headed or which country they would end up in. They did not choose Spain, rather as Maria explained: “Spain chose us.”.

The war has separated Maria not just from her husband but from her elderly parents too, forcing her to leave behind her home and her country. She said, “in one day, we lost everything – work, peace, our past life”.

As a child, Marina’s grandmother used to say to her, “if only there was no war”. Marina is grateful that her grandmother is not alive to see the horrors the Russians are now inflicting on the Ukrainian people.

“So many people suffer because of one person”, she added. “Putin is an unhealthy person. If he were of sound mind, he would understand that you cannot achieve peace by war”.

Marina’s sister Alena described how they met volunteers from Alcossebre in Przemysl, Poland. Alena said they were offered help back in Spain of “free accommodation, meals, assistance with paperwork, Spanish lessons and a school programme for the children”.

It was an offer too good to refuse.

Alena is planning to work in Spain for “as long as the hostilities continue”. As far as the future is concerned, she said, “I don’t guess any further”.

While Alena studies Spanish and looks for work, she can’t help but worry for the well-being of her parents, unable to move to a safer place. She desperately wants to help them and to “hug them”.

With her plans for the future in tatters, Alena is at least grateful to no longer be in danger. She thanked the people of Alcossebre, and Kione in particular, for their help and support, and prays for “peace and humanity in the whole universe, like we have met in Spain”.

At present, Miquel Angel has no further plans to bring more refugees to Spain, as “we want to focus on the ones already here”.

He added: “Our project is not yet finished. When all the refugees have their own homes, with proper jobs, and are completely settled, that will be the moment to start a new trip to bring another coachload of refugees to Alcossebre, and to start the project again”.

The author of this article is Sue Wilson MBE, Chair of Bremain in Spain. Read more of her writing at the Olive Press HERE and visit the Bremain in Spain website for more.

Ukrainians in Spain: ‘Every night I wake up and worry about the lives of those I’ve left back home’

EXPLAINED: How can I offer my home in Spain to refugees fleeing war in Ukraine?