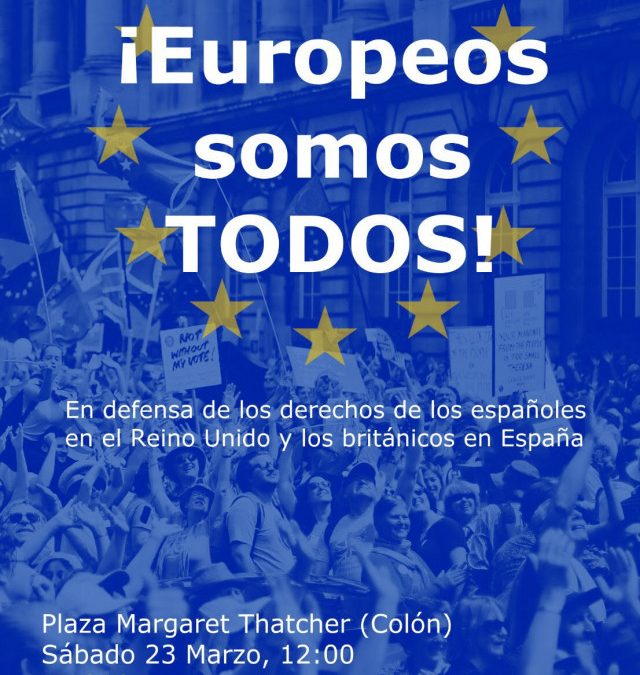 In London on Saturday, just six days before Britain is (currently) scheduled to leave the European Union, hundreds of thousands of people are expected to take to the streets to demand that the public is given a final say on any Brexit deal.

The “Put It To The People March” will begin at noon on Park Lane for a march to Parliament Square.

Among those leading the calls for for a People’s Vote will be Britons resident in Spain, with a large contingent flying over to London especially for the event – among them members of Bremain in Spain.

Sue Wilson, chair of Bremain in Spain, will be flying over to join the march to Westminster along with around 100 members of the campaign group.. “We’ve supported the campaign for another referendum from the start, and we’ve actively campaigned to give the British public another say in this debate. The Brexit that was sold was a lie, a fantasy, a pipe-dream. The British public deserves a chance to think again.”

“The June 2016 referendum result started a Brexit nightmare for UK citizens living in the EU and EU citizens living in the EU. Since then, we’ve been working together to make our voices heard. We’ve been side-lined and silenced for too long. On Saturday, we’ll be loud and proud and demanding
another referendum. Although most of us couldn’t vote on our own futures in June 2016, and it’s unlikely that we’ll be able to vote in the next referendum, we wholeheartedly support a #PeoplesVote.”

Wilson concludes: “The public must be able to make an informed decision based on the facts, not the fantasy. We must establish if Brexit really is the ‘will of the people’ before making this momentous decision. It’s the only way forward that can start to heal the divisions created by Brexit. If Theresa May can keep asking parliament the same question, how can she deny the public a second chance? As our new banner says: we want a voice, a vote and a final say, because Brexit is bonkers!”